Back in the last century we used a Garmin eMap GPS unit connected to a laptop, running Windows 98 and a map program called Street Atlas 4.0. As the years passed we upgraded the software to Street Atlas 7.0. We tried several subsequent versions of Street Atlas as they came out but they weren't as good as 7.0 because for some reason they had abandoned the Windows desktop structure in favor of some generic one. We loved the way 7.0 worked with keyboard shortcuts and it did everything we needed. It tracked our position on a moving map, told us how far it was to our destination, and talked to us. The way it talked reminded us of our friend Bill's son, Andrew. Andrew talked quite a lot when he was a toddler. The computer talked a lot too and was frequently amusing in its pronunciation of some words like "scenic" which it insisted on pronouncing "cynic." It made funny little mistakes, like telling us to make a right turn onto a road from the middle of a bridge, where the road was 100 feet below us. In spite of these minor shortcomings, we named the GPS / laptop combination "Andrew" and kept him.

Last year we got two new GPS units, "Nancy" and "Bob." Nancy, named after Nancy Drew - the teenage detective, is a Magellan 700 with a built-in 10 GB hard drive containing all the maps of North America. She talks a lot but is usually correct, both in her pronunciation and directions. Bob is a Garmin 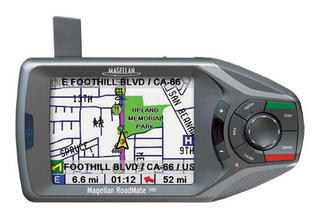 GPS 76 CS hand held unit who can't speak. Bob beeps instead, so his nickname is "Beepy Bob." He's capable of showing detailed directions, including turns. We use him mostly as a speedometer which is much more accurate than the one provided by Ford.

Nancy and Bob live on the dashboard. We take them in at night for security reasons. In the morning my job is to get Nancy, Bob and Andrew powered up and running. Nancy comes right to life and Bob is pretty quick, but poor Andrew sometimes takes up to five minutes to wake up. This used to present a problem when he was our only GPS because we would have to wait for Andrew before we could head out. Now we're on the highway in a matter of seconds.

We've become increasingly more dependent upon Nancy. Sometimes I don't even know where I'm going when I'm driving, because Nancy knows. This can be troublesome when a police officer asks you where you're going and you can't come up with a good fast answer, as I found out one afternoon on the Pennsylvania Turnpike. The State Troopers wanted to bring their dogs to search our van when I couldn't tell them where we were going. We were profiled for having Florida license plates.

Another great thing about using a GPS is being able to get around traffic snarls. You can leave the main road with complete confidence and you'll never get lost. We love to drive the back roads of America and now we can take more of them than ever thanks to GPS technology.

Our hand held GPS came in handy in London last year when traffic was so backed up during a taxi ride to the BBC that we had to get out and walk. I had marked the location of our hotel on the GPS and when we got to the radio station we realized that our hotel was less than two miles away, even though the taxi ride had been an hour. We were able to enjoy a leisurely walk back to our hotel thanks to our GPS.

I just celebrated my birthday on July 13, and Camilla got me a new GPS. It's a Magellan 760 like Nancy, but has a 20 GB hard drive and many improved features. We named her "Cherry" after Cherry Ames, another fictional sleuth from Camilla's youth. We always name our GPS's because as Camilla says "Things just run better when they have names."