A Special Lady by Camilla McGuinn

Louis and Irene Heyne called their only child Dorothy. She grew up a city girl in Chicago, never quite got used to the winters, but she loved the excitement of the city. In 1932 she graduated from Northwestern University. Dorothy wasn’t sure what she was going to do with a college degree but she was sure that she wanted an exciting life. She found a job as a reporter for the Hearst newspaper, CHICAGO AMERICAN.

On August 6, 1940 she interviewed for a job with a publicity firm. It was for a temporary job to replace Jim McGuinn who was leaving for a 3-week stint at The National Guard camp. Before Jim left in his military uniform, they had their first date and he asked her to marry him. When he returned from his camp duty, she accepted his proposal.

Their 45 day, whirlwind romance became a marriage just before noon at City Hall in Chicago, October 19, 1940. There was no time for lunch; Jim had to go back to work. They had just enough time for a champagne cocktail at the Palmer House.

Jim and Dorothy’s friends were writers, artist and actors. They loved long nights of lively discussions. In 1941, Dorothy was surprised to find herself with child. She and Jim weren’t sure how a baby was going to fit into their life style but when James Joseph McGuinn, III was born on July 13, 1942, their life was enhanced. Little Jimmy became the admired attraction at all their parties. 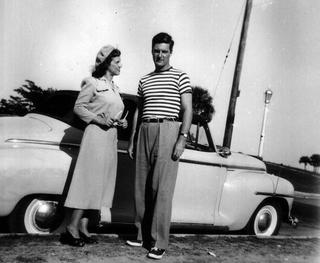 When Little Jimmy was five, Jim and Dorothy wrote a satirical book on child psychology and it became a best seller, PARENT'S CAN'T WIN. The success of the book gave Dorothy and Jim their chance to escape the cold Chicago winters, so they packed Jimmy into the convertible and headed to Florida. Dorothy was going to write, Jim was going to paint and Jimmy was going to first grade. St. Augustine was pretty, but after a while the vivacious couple got bored. They couldn’t go back to Chicago, their friends had given them a wonderful round of going away parties and it was too soon to show up on their doorsteps again, so they headed to New York.

Little Jimmy was 8 years old when his brother Brian was born in Tarrytown, NY. Dorothy had settled down and loved being a mother but she still missed the excitement of a career and the parties of Chicago. After a few years of living in Fordham Hill, they were back in the Windy City.

Dorothy and Jim were entrepreneurs and started their own public relations business. They moved to a house on East Division Street. While on East Division they watched Jimmy develop into a folk singer with lessons from the new school in town, THE OLD TOWN SCHOOL OF FOLK MUSIC. They were his biggest fans and never missed his coffee house performances. They weren’t concerned that Jimmy wasn’t interested in college. They encouraged him to follow his dreams, just like they did.

Jimmy left home when he was 17, right after graduation from the Latin School of Chicago. He was hired by the LIMELIGHTERS to fly to Los Angeles and to play guitar and banjo on their album, TONIGHT IN PERSON. Jimmy never returned to live at home, but he often visited and would bring by his new circle of friends. Dorothy loves telling the story of waking up one morning and finding Tommy Smothers sitting at her kitchen table.

When Jimmy’s group the BYRDS, had a number one single, Dorothy, Jim and Brian would call the local radio station on a rotating basis and ask them to play “Mr. Tambourine Man.” Fans would gather outside their townhouse and Dorothy would invite them in for hot chocolate. She developed long relationships with the fans that adored her son. She still continues some of those relationships today.

She is a very special lady. Her dreams lead her to places most people won’t go. She knows that life is wonderful and exciting. This is her 95th birthday and she will read this because she turns on the computer everyday and answers her email. So, Dear Dorothy, Happy Birthday and we want you to know that we are planning your 100th Birthday Party. Which city do you want to have it in?

Dorothy has decided to start a blog of her own. Visit her at:
Roger's Mom's Blog