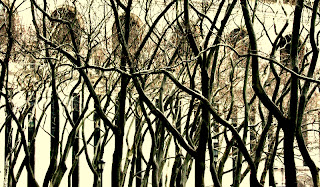 The building was constructed in 1931 and named after the haberdasher Morris Brill who owned the building’s ground floor clothing store. The Brill Building was the home of the publishers' empire, “Tin Pan Alley.” Publishers nurtured and owned the works of Gershwin, Joplin, Berlin and other prolific composers. These were the last days of the publishers' bastion and Jim was walking into those halls now graced with new writers: Neil Diamond, Burt Bacharach, Neil Sedaka, Barry Mann, Cynthia Weil, Carole King and Gerry Goffin.

Mr. Darin had a large office at the south end of a hall where he talked on the telephone until lunch time. Then he would call his stable of writers out of their five by nine stalls to join him for cheeseburgers and Dr. Brown’s cream sodas. The nine to five work day for Jim was tedious compared to all the adventures he had enjoyed on the road.

Jim was instructed to listen to the radio and to emulate the songs he heard. He kept three radios playing tuned to the top three stations: 1010 Wins, WABC and WMCA. After listening to repeated hits by the Beach Boys, Jim teamed with Frank Gari and wrote a song they called, “Beach Ball.” When they played it for Bobby, he called the Brill Building demo studio and booked it that hour.

The three-track recorder was switched on while Bobby Darin played drums, Frank played piano and Jim played guitar. After the instrument track was recorded, all three stood around one microphone and sang the song in harmony. Capitol Records released the single under the group name, “The City Surfers.” None of these city boys had a love affair with a surfboard, but it was the wave of the times.

“Beach Ball” was played by the New York City radio stations, but it was a recording of it by Jimmy Hannan in Australia that sent the song to the top ten on the “Down Under” music charts. Harmonies on the song were sung by a group of brothers named Gibb. They later became known as the Bee Gees.

The Brill Building’s intense requirements for hit songs and its daily grind was stifling to Jim. It was the evenings in Greenwich Village that gave him a release and hope for his music. 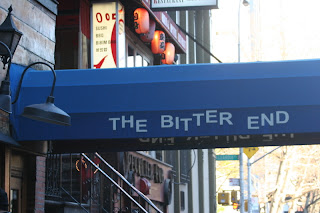 The Village was teeming with venues for musicians and comedians in which to practice their art. Café Wa?, The Gaslight, The Bitter End, Israel Young’s Folklore Center, The Village Gate 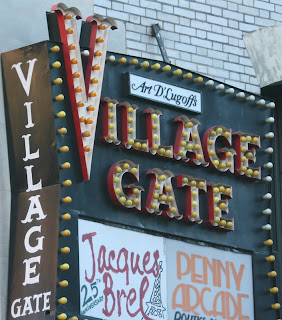 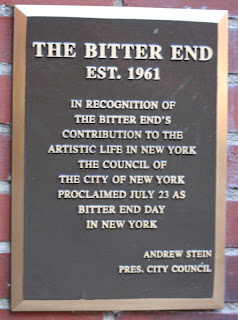 
The Café Playhouse was the venue for the unsigned itinerant musicians - John Sebastian, Richie Havens, Peter Tork, Tiny Tim - and that’s where Jim would go to get in front of an audience as Bobby had tutored him to do.

On November 22, 1963, Jim gathered with a group of friends at Bob Carey’s apartment and stared with shock at his black and white television while they listened to the news reports of John F. Kennedy’s assassination. In his grief, Jim turned to his source of comfort, a guitar. As he strummed the music to the old folk song “He Was A Friend of Mine” these words came to him as he sang:

He finished singing, laid down his guitar and held his aching head as tears dropped to the floor. Bob gave him a tranquilizer and told him to lie down. 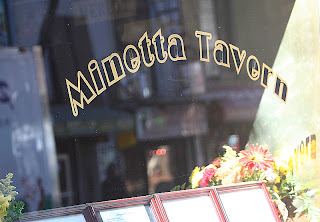 In the morning, he walked the streets of the Village joining the wave of despair that had engulfed the City and the nation. He ended up sitting at the bar of Minetta’s Tavern, nursing a beer and thinking about meaning of his life. Folk music seemed more important than ever to him. Songs were still a way to carry the news, the pain and the hope of people. Songs were a way to make a difference and differences were on the way. Jim seldom went back to his stall in the Brill Building.

John Sebastian was born in New York City and raised on MacDougal Street. Jim and John applauded each other’s performances at the Café Playhouse – music was their bond. 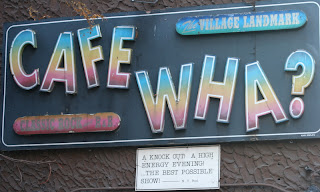 One night in front of the Café Wa?, John showed Jim a pair of small oval-shaped sunglasses with cobalt blue lenses. John suggested he try them on and lift his eyes upward toward the streetlight. Jim loved the effect and vowed that as soon as he got some money he would get a pair with prescription lenses. At the moment, he was wearing only one contact lens. He had lost the other one and everything was very expensive to him.

Electra Records producer, Paul Rothchild would often scout the Village for new talent. Sebastian introduced him to Jim. Paul was impressed with Jim’s guitar technique and arranged for him to do some recording session work. One session was with the duo, Paul Simon and Art Garfunkle. They called themselves, Tom and Jerry. They had wanted to use their first names, Art and Paul, but Jim’s former Los Angeles roommate, Art Podel along with his partner Paul Potash had already taken the name.

Rothchild recommended Jim to Jac Holzman, the president of Electra, to play guitar and banjo on “Judy Collins #3” album. 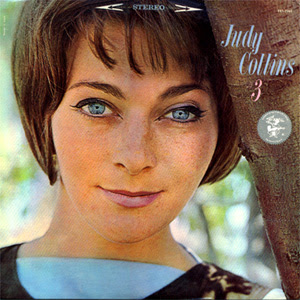 Jim would go to Judy’s West Village apartment to work with her on arrangements before the studio time was booked for the recording. He arrived at her home always on time, wearing a suit and tie. Bobby Darin’s tutelage remained evident in Jim’s life. Judy, a consummate professional, was open to all Jim’s suggestions, which included non-traditional folk instruments such as cellos and strings. They were both influenced by Pete Seeger and working on Pete’s “Bells of Rhymney” and “Turn, Turn, Turn” was a treat for Jim. Jac Holzman and Judy gave Jim a “Musical Director” credit on the album.

This time in the village was a homeless one for Jim. He migrated from one friend’s apartment to another. One drifting night, he got off the bus near Washington Square and walked through the park to the Earl Hotel. The hotel was beautifully situated for a folk musician. The folk clubs were close and every Sunday the sounds of 5-string banjos, 12-string guitars, 6-string guitars, mandolins, fiddles and tambourines flowed around the circular fountain in the middle of the park.

Shawn Phillips, a folk singer from Texas, smiled at Jim as he struggled through the door into the lobby of the Earl Hotel burdened with his guitar, banjo, portable record player and suitcase. “Hey Jim, looks like you’ve got all your worldly possessions. Are ya checking in?”
“Thinking about it. Do you know how much the rooms are?”
“The one I just checked out of was three dollars a night and its got a great view of the park.”
“That sounds good. What’s the room number?”
“707, like the plane, man. I know you’ll like it. I was there for a month.”

Jim walked into room 707, laid down his gear and opened the window to let in the winter’s night air. He had given the hotel clerk half of all his money for the weekly rate of fifteen dollars.

Money wasn’t important to Jim – music was. He made a beeline to the record store on the corner of Eighth Street. He had to get the new album “Meet the Beatles,” and analyze their style as he had done years before with Elvis Presley, Bob Gibson, Scruggs and Flat, and Pete Seeger. He loved the sound of the Beatles because they were using folk music chord patterns with modal forth and fifth harmonies, and combining it with elements of jazz, blues, Bossa Nova and rock 'n' roll. He was amazed at their innovative approach to music and decided to incorporate their “Beatle Beat” into his folk repertoire, much to the chagrin of the Village folkies.

Joe Stevens, the proprietor of the Café Playhouse, offered Jim a steady job, which meant he got paid by passing his hat around to the customers. Joe liked Jim’s new musical style so he put a sign on the sidewalk - “Beatle Impressions.” Jim hated the sign but the gig sustained his room rent and his daily meal of a twenty-five cent piece of pizza.

Michelle and John Phillips lived in a suite at the Earl Hotel. Jim had met them a few years earlier in San Francisco, so it was natural to spend time in their suite sharing songs, drugs and their better view of Washington Square Park.

Bobby Darin was still watching out for his protégé and sent Dion Di Mucci to the Earl Hotel to audition Jim for his next touring band. Dion listened to Jim’s “Beatle Beat’ repertoire, then invited him to lunch. It was a welcome invitation. Food was always on Jim’s mind and seldom in his stomach.

They walked to Jim’s regular pizza stand on MacDougal Street and ordered two sausage sandwiches. Dion paid with a five-dollar bill. Five dollars was a lot of money to Jim and he thought that “Runaround Sue’ and “The Wanderer” must have made Dion rich.

Walking back to the hotel, Dion asked Jim, “What do you think it’s all about?”
“What do you mean?”
“Life. It isn’t about money and it isn’t about being a rock star. So what is it about?”
“Well… not sure. I don’t have money. I’ve never been a rock star. I don’t know, maybe it’s just about getting high.”
Dion paused, then said quietly, “Your style is really interesting and I think you should stick with it, but you’re not exactly what I need for this tour.”

The long winter was coming to an end and Jim was ready for a change when Bob Hippard called from Los Angeles. Bob was Hoyt Axton’s tour manager and he had convinced The Troubadour’s owner, Doug Weston, to let Jim open for the three week engagement of Axton and Roger Miller. Bob told Jim to get on the next plane to the coast and he would meet him at the airport. Jim had no money for the airplane ticket, so this time his parents fronted the cost.

Bob almost didn’t recognize Jim as he walked toward him from the airline gate. This 21 year old who had toured two continents, played Carnegie Hall, been on national television, performed with world renowned musical artists, recorded on hit records now looked like a vagabond. His hair was long and combed forward, his big black crumpled raincoat looked huge over his thin frame and his pale skin was a sharp contrast to the warm southern California sun … but there was a glint of expectation in his eyes and in his walk.

We did what tourist always do in New York City on Thanksgiving. The night before we made a pilgrimage to watch the parade balloons blow up to the size of small buildings. 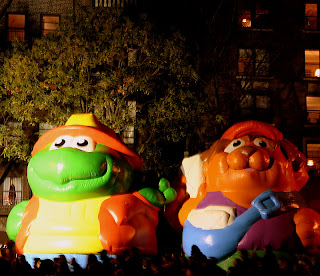 The next morning, we braved the wind and cold to watch the parade from a sidewalk covered with a sea of umbrellas. We then found warmth and shelter in two different restaurants - one for appetizers and one for the tradional meal. Patrick, Roger's son and New York resident, joined us and we all ate more food than we should have before catching the ferry back to our hotel. 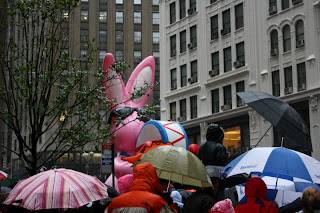