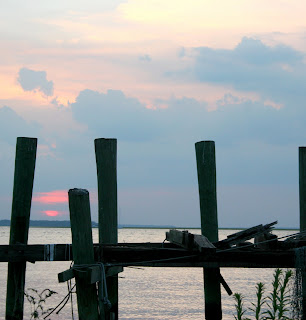 There were two upcoming events that made driving out of our driveway a special adventure. We were on our way to Ocean City, New Jersey for a concert with John Sebastian as the co-bill. I have previously written about Roger’s first meetings with John and John’s influence on his life in Roadie Report 25. This was going to be one of those wonderful rock’n’roll re-unions. The other special event was the celebration of Roger’s 65th birthday.

We arrived in Fernandina Beach, on Amelia Island in FL just as the sun was setting on July 12th. In 1861, Fernandina Beach was the home of Florida’s First Atlantic to the Gulf of Mexico railroad. The old train station is now the offices of the Chamber of Commerce. 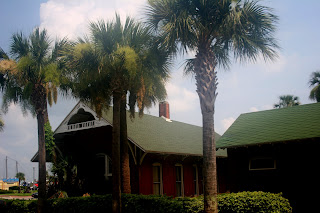 (Photo by Camilla) The town has the romantic architecture of the turn of the last century. It also has the beauty of sunrises and sunsets. There is just one small problem which has probably kept it from being Florida's northern Key West -–it is the home of a paper mill. We have been there only once when the acrid odor reached our senses, but the charm of the town outweighs the overwhelming presence of an industry that we all cavalierly use everyday.

Over the years, I have arranged a few large birthday celebrations for Roger, but his favorite celebrations are the ones where we quietly toast the day with a few friends or just the two of us. I felt 65 was a milestone, or at least if is with our government, so I searched the Internet to see if there was an unusual stopping place during our trek north on July 13th, the big day.

I considered taking him to my hometown of Beaufort, South Carolina. He has always enjoyed walking those streets, but as I was looking for a cozy but elegant setting, I found a plantation 30 minutes away from Charleston, in Summerville. I studied their web site and the when I saw the line, “A step ahead in luxury and a stepback in time,” I knew I had found the place to celebrate a romantic birthday evening, The Woodlands Resort and Inn. 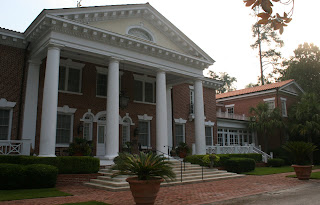 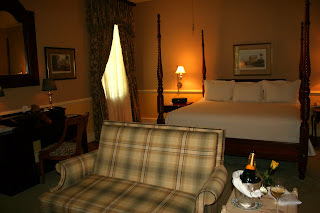 Afternoon tea was sent to us as we settled into our room. That of course, is ice-tea. We are in the South. A chilled bottle of wine was in the room and a sense of deja-vu. The armoire was of the same design as the one in our bedroom at home.

Roger checked the Internet access and I went to check the table for his birthday dinner. The dining room was lovely and the Maître de very accommodating. I chose the perfect table, then skipped backed to the room very excited about the upcoming evening. 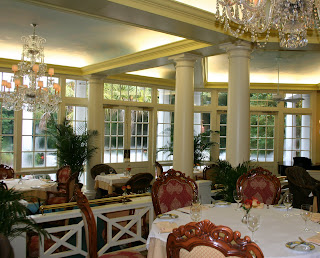 I was right to be excited. The meal was amazing. The chef even prepared Roger one of his favorite dishes, even though it wasn’t on the menu. 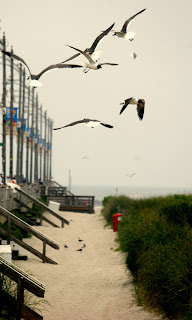 The concert with Sebastian was part of a Summer Monday Night series held at the Ocean City Music Pier. The theater seats over 800 people. John and Roger’s show was the first sell-out of the Monday night series. 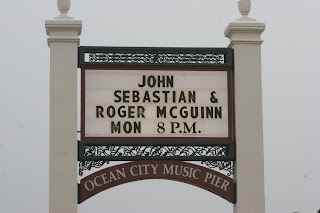 It didn’t matter to either Roger or John who opened the show, but John had a 4 hour drive after his performance, so he entertained the fired up audience first. John did stay awhile in order to join Roger with his harmonica for three songs: “You Got Me Running,” “St James Infirmary Blues" and “Knockin’ On Heaven’s Door.” After the songs, John quietly slipped away into the night. 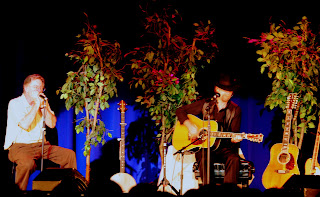 Later at the hotel, Roger and I were reminiscing about the concert and I mentioned to him that I noticed his performance had a slightly different relaxed attitude than the relaxed one I was used to seeing. He congratulated me on my perceptive observance then told me that he had sat on the side of the stage during John’s show. He was inspired by John’s amazing musicianship and his loving attitude towards the audience. I could tell that John’s inspiration was reflected in Roger’s performance. There is a proverb, "As iron sharpens iron, so man sharpens man.”

Tuesday morning, we drove to the Sheraton Suites On The Hudson in Weehauken, NJ. Gary Trust, from Billboard magazine, had emailed me earlier in the week and asked for a copy of “Live From Spain” for their archives. I told him that we would be happy to drop one by the office since Roger was scheduled to be in New York for an interview.

We caught the ferry right out the hotel door, stepped up onto the free Ferry Bus and got off three blocks from the Billboard offices. (We are big fans of public transportation when it works.) After chatting with the staff for a while, Roger looked at me and said, “Time to go.” I had forgotten to tell him, that Gary also took this opportunity to arrange an interview. I do need to remember that sometimes, Roger can’t read my mind.

While Roger was sequestered with Jonathan Cohen. Gary took me to the Billboard library.

Billboard magazine is a trade paper founded in 1894 for the billboard industry. It grew into one of the most important music industry trade papers. When an artist hits the top of the Billboard Charts, they are considered a success. Once that happens, the record company presidents sometimes take their calls. Gary invited me to view the original issues of the magazine.

The Billboard library is a small space with piles of the magazine piled in heaps on every available surface. The oldest copies are stored in heavy duty file cabinets. While Gary was busy looking for the early issue, my eyes glanced down at the bottom of the three foot stack of magazines that were next to me. Sticking out at an angle was a cover from June 1973 and I recognized a face on the cover. It was the album cover from Roger’s first solo album titled Roger McGuinn. The original photograph hangs on my office wall. I couldn’t talk for a moment while my mind went over the probability factor of me standing in that spot in the Billboard library, in the midst of hundreds of magazines and seeing the face of my husband. I pointed to the picture and asked Gary if he knew the person in that photograph. He didn’t. His mouth dropped too when I told him it was Roger. 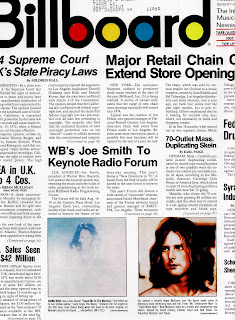 ( 1973 Billboard)
A short visit that happened just because of an email request, turned out to be a shot heard around the world. The interview went onto the web the next day and Roger’s quote about not wanting to do a ‘Byrds’ reunion was picked up by Rolling Stone and news outlets around the world. When the August 4, 2007 hard copy issue was released, on page 65 was a picture of Roger and the photo next to his was one of Diana Ross. She was in the photo next to Roger in the 1973 issue too. We didn’t notice that tidbit until I asked Roger to scan the cover for this blog. Some people would say this so called co-incidence was stranger than fiction, I say it was a smile from God.

(2007 Billboard)
Wednesday was another trip down memory lane for Roger. Bob Dylan’s “Rolling Thunder Review” was one of Roger’s all time favorite tours. Jeff Rosen asked Roger to come to New York and to spend a couple of hours talking on camera about that incredible “band of gypsies” that would slip secretly into a town and announce from a radio station, “there is a show in town tonight.”

The mirrored armoire in the hotel suite, the touching concert with John Sebastian, the jaw dropping events at Billboard, the memories of the visionary tour from our modern day Shakespeare were all beautiful wrappings for Roger’s birthday. But there was still one more ribbon.

We woke up early, planning to retrace our path back south. I didn’t make reservations for the Cape May-Lewes Ferry because I wasn’t sure when we would get to the terminal. Often during the 140 mile drive, Roger offered to drive, but I felt compelled to keep going and not to stop. I drove up to the ticket gate, handed the man my credit card and was told there might be room on the noon ferry, if not the next one was at 1pm.

There were a lot of cars towing big trailers. The traffic director approached our van with his walkie-talkie in hand, shaking his head, “The size of this van will probably keep you off this ferry.” We waited holding our breath. It was no big deal if we didn’t get on, but we were just one car away and our hope had flowered into childlike eager anticipation. I gnawed on my lower lip, then the walkie talkie crackled, “Send in the van.” 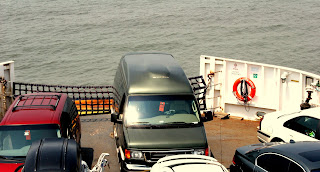 (The last place on the ferry!)

Hi, this is Roger McGuinn.

I first heard Tommy Makem sing with the Clancy Brothers at the Gate of Horn in Chicago in 1958. He played the 5-string banjo like Pete Seeger and sang like nobody I'd ever heard. His enthusiasm was overwhelming! The punch he got on lyrics amazed me! It didn't matter what the song was about, Tommy devoured it and made it his own.

In 2001 I had the pleasure of recording with Tommy and his sons The Makem Brothers for my CD "Treasures From The Folk Den." We decided to sing "Finnegan's Wake" because it was one of the songs I'd heard him perform with the Clancy Brothers at the Gate of Horn.

Tommy passed away on August 1, 2007. We will all miss him and be grateful for his wonderful legacy of music.

Here's a video from the "Treasures From The Folk Den" recording sessions. Tommy's voice was so loud that he had to stand three feet from the microphone to blend with my vocal. I was just inches away from the mic.