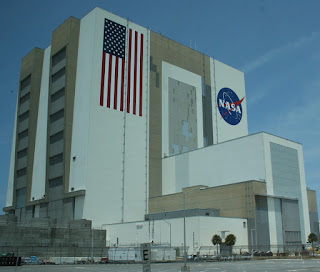 In 2004 Roger was invited to perform for the Astronauts Hall of Fame induction ceremony at the Kennedy Space Center in Florida. The space program captured both Roger's and my attention from the first television broadcast of Alan Shepard’s flight as commander of Freedom 7 on May 5, 1961. His 15 minute, 28 seconds flight successfully put the first American in space and sent our young imaginations soaring.

When John Glenn orbited the earth in 1962 in the Friendship 7 spacecraft, Roger was working in Las Vegas. I was in Mrs. Ritter’s fourth grade class, sitting on the floor watching the black and white television that she had hauled into the classroom for her students to see history in the making. History was not only in the making, heroes were.

In 2004 we were both awestruck and nervous when faced with the reality of Roger performing for our heroes. We were invited for the whole weekend’s events and to join the astronauts at all the various functions. I have never found myself so speechless.

One of the songs Roger performed was “Draggin.” He thought that because so many of the astronauts were pilots that they might chuckle at the premise of two pilots racing across the USA in their jets. At the informal dinner the next night, we were sitting at the table with astronaut, Bob Crippen. Bob laughingly told us: "We used to do that! We really did race each other across the USA in our jets."

Linn LeBlanc, the executive director of the Astronauts Scholarship Program, has invited us to the all the ceremonies since 2004, but unfortunately we'd usually had concerts scheduled for the first weekend in May. This year was different! Our schedule was clear and we readily accepted the invitation. 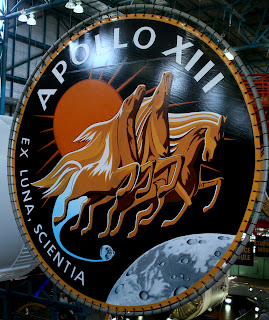 (Photo by Camilla) May 4th was the gala dinner for the Astronaut inductees and the major fund raiser for the Astronauts Scholarship Program. We were invited to ride on the astronaut’s family bus from the hotel to the Apollo/Saturn Visitor Center. The tables were assigned and we were thrilled to find ourselves at Table 13, sitting next to Apollo 13, Astronaut Jim Lovell. It didn’t take long for my tongue to become untied, because Jim is one the sweetest men who ever circled the Earth. Through out the evening, Roger and I would give each other those, “I can’t believe this" looks every so often. 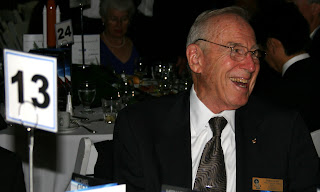 
Jim was inquisitive about our work and when I told him that Roger is active in archiving Folk Music, he lit up. Folk music became our common bond and fortunately I had slipped two copies of “The Folk Den Project” into my suitcase. I knew from our last visit that this was the weekend of Scott Carpenter’s birthday and I had purposely brought a copy for him. Now I knew why I brought two copies. Roger gave Jim a copy the next night.

After the gala, we boarded the buses for the ride to the hotel. We decided to be “flies on the wall” and just soak in the wonderment of being around our heroes, so we went to the back of the bus. That night, at the back of the bus, we met one of the inductees into the Hall of Fame, Jeffrey Hoffman and his wife Barbara. I'm embarrassed to admit, that I didn’t recognize him but maybe that was a good thing. Barbara and I began talking like old friends and throughout the rest of the weekend we often sought each other out in the crowds. Jeffrey is now a professor at MIT and we’re looking forward to seeing them when Roger performs in Natick, Masschusetts in September. 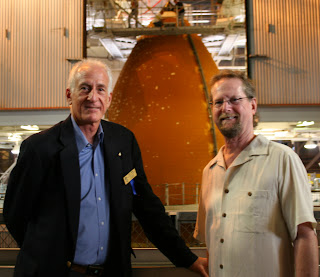 (Photo by Camilla) Jeffrey is an astronomer who worked on the Hubble Space Telescope. They invited us to sit at their table for the last dinner of the weekend and I found myself asking deep questions - “Do you dream about space?” Roger’s questions were more technical and a bit deeper.


At the hotel the fun continued. Astronauts know how to have a good time. Maybe it's working in life and death situations that spur a desire to live every minute to the fullest. There was a hospitality suite for the group and we all gathered there each night after the official festivities. Roger brought his 7-string guitar. 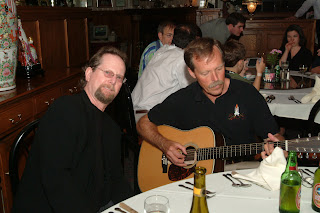 Years ago, the working astronauts formed a band and named it “Max Q” after the term for the point of maximum dynamic pressure - the point at which aerodynamic stress on a spacecraft in atmospheric flight is maximized. Brewster Shaw and Hoot Gibson were members of the band and they shyly strummed Roger’s guitar for a few chords but quickly gave it back to him. I doubt Roger would give back the controls of a space craft so fast, but then again, they would never give them to him. 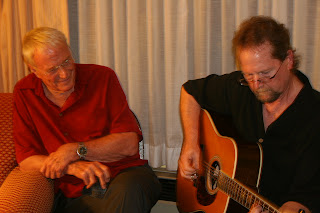 Scott Carpenter and Roger relaxing in the hospitality suite.(photo by Camilla) 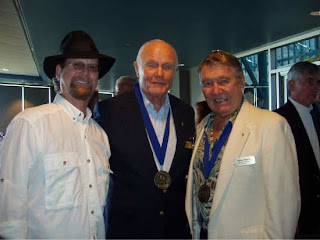 Roger, John Glenn and Wally Shirra in 2004. (Photo by Camilla)

There was one person missing from the hospitality room – Wally Shirra, one of the original Mercury Seven Astronauts. We were looking forward to hearing his humorous stories again, but he died suddenly just a few days before this year’s induction ceremonies. 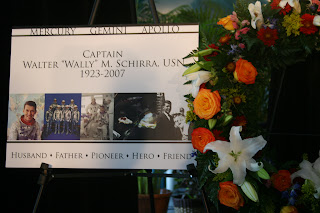 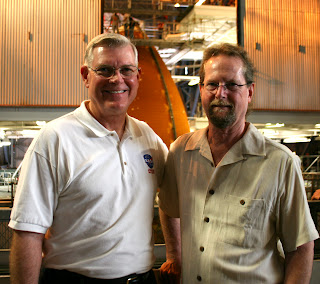 A tour of Kennedy Space Center was arranged for the Astronauts and their families on Saturday morning. Roger and I took familiar seats in the back of the bus and found ourselves next to another inductee, Michael Coats. Michael is currently the Director of Johnson Space Center in Houston, TX. He suggested we tour the VAB, Vehicle Assembly Building, where the space shuttle was being repaired after a recent hail storm caused major damage.

The experience of standing next to the space shuttle with astronauts that had flown in space, in the VAB has been added to our list of “some of the most memorable times in our lives.” 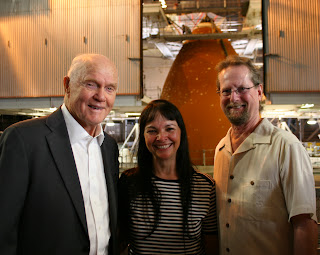 John Glenn and the McGuinns. One of the few times I wanted my picture taken!(Photo by the willing hands that I thrust my camera into.)

After the tour, we went to the Visitor Center for lunch and the induction ceremony. Before we were taken to our seats, Roger and I looked from the balcony of the VIP lounge were the luncheon had been served, at the people milling around the exhibits below. How blessed they were to explore these marvels of technology and to be next to people who were history makers.

The Astronauts Hall of Fame was the fruit of the Mercury Seven Foundation. Six original astronauts from Mercury Seven and Betty Grissom, the widow of Virgil (Gus) Grissom established the Astronaut Scholarship Program in 1984. They each contributed to seven scholarships of $1000 each for college students who exhibit motivation, imagination, and exceptional performance in the science or engineering field. The foundation now awards annually 19 scholarships each worth $10,000. To date, the foundation has awarded more than $2.3 million in scholarships to 211 deserving students. The Astronauts Hall of Fame not only recognizes the brave contributions of the astronauts who have changed our world, but also supports this foundation. Brave souls went to uncharted space. Many returned and those who returned have continued to help mankind with small steps to help others make large leaps.

Tickets to The Astronauts Hall of Fame induction are available to the public. Hope to see you there in the future!