Roadie Report 78 by Camilla McGuinn- "A Hurricane, A Flood, A Friend, A Fire and A Victory!...Part 2

We finished the three remaining Southern California dates with a different sense of purpose. Roger will always sing Tom Petty songs and tell the stories of meeting and touring with Tom. He hopes people will laugh, smile and quietly remember a truly gifted artist we were all blessed with for far too short a time.
The audiences at the Shannon Center at Whittier College, the Smother’s Theater at Pepperdine University and the Poway Center in Poway were very responsive to the Tom Petty’s songs and stories. Then it was time to head north to the Carriage House Theater at Montalvo Arts Center.
We arrived in Los Gatos the same time the smoke from the Napa fires reached the quaint town. Everyone was in a state of disbelief. Watching the fires on TV, we saw the entrance to the Napa neighborhood where we had once stayed at a friend’s house. The houses were gone. A frantic call to Adriene brought some relief. She had sold the house a few months before and was living in San Francisco. She was so sad for the present owners.
Then we emailed Chris and Connie Hillman to see how their son Nick was faring. He worked at a Napa vineyard. He told Connie that the harvest was finished before the fires began, so all was not lost.
One more frantic email needed to be sent. This email was   to our friend Linda whose sister lives in Napa. She told us that her sister and husband got out of their house in time with just the clothes on their backs.
A few months later, the Hillmans managed to get out of their house in Ventura before The Thomas fire burned through their kitchen. Their house was the only one left standing on their street.
We’re praying a lot of prayers of thankfulness for the lives which were not lost and for “Beauty for Ashes” for those who have to rebuild and refurbish their memories.
Disasters seemed to be following us but it was only the rain and smoke that affected us… to this point. But I won’t leave you hanging now, I’ll give you a clue. The next strange thing brought us smiles. Remember the title ends in a “Victory”. That’s at the end of this story.
Three days after Montvalo, Roger was performing at the Taylor-Meade Performing Arts Center in Forest Grove, Oregon. 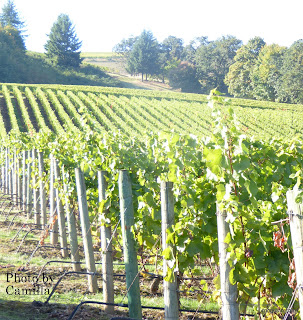 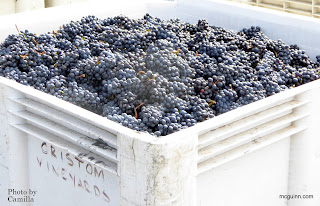 The day after, we were invited for the Harvest Lunch at the Cristom Vineyard near Salem in the Willamette Valley wine region. I even got to be part of the grape harvest process – I pulled a leaf out of the grape bin. Roger even caught the moment on video.  I was so thrilled. 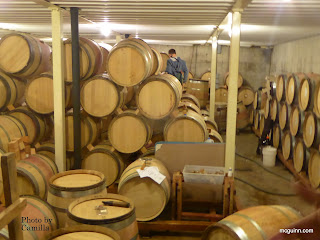 The owner was busy filling the oak barrels with wine while we had lunch with the winemaker, Steve and his family, the CEO, our old friend Steve Thomson and his wife Karen and the grape harvesters.

I had a dream of joining in a grape harvest in France but to experience that day in Oregon was even better. I love that the Cristom grapes are allowed to ferment naturally without any designer yeast. I found out a few years ago that I am very allergic to designer yeast that many vineyards use to make sure they have a barrel that tastes the same every time. 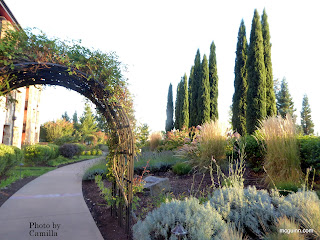 A few unscheduled days before the next Kirkland, Washington concert, sent me on a quest to find a special place to relax. Just a few miles from the Cristom Vineyard was the Allison Inn and Spa in Newberg. Strolling and relaxing in the beautiful room and gardens of the Allison Inn added length to our lives. A relaxed attitude lengthens a man’s life. I read that in the Good Book. 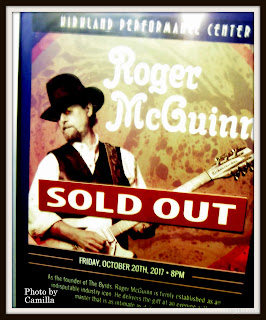 The Kirkland Performing Arts Center sold out quickly to an enthusiastic audience. Heading south to San Francisco to celebrate my birthday after all the good shows made the drive even more enjoyable.

San Francisco has always been a favorite city of ours and I couldn’t think of a better place to spend my birthday. The Ritz Carlton even had a special, 4 nights for the price of three. Now that was a great gift.


I told Roger that there were places we haven’t explored in the city and since it was my birthday, we put on our walking shoes. The first adventure was Alcatraz. I tweeted that I was taking Roger to prison. We walked from the hotel to the harbor through crowded China town and caught the ferry to the island. There was a very steep pathway up to the prison and I wasn’t sure our knees would take it, but Roger insisted we persevere. The self guided audio tour took about an hour and it was a very good history lesson.


Back in San Francisco we began the walk back up the steep hills to our hotel when I gave up and called Uber. I was exhausted and couldn’t wait to get back into the cool of the hotel lounge. 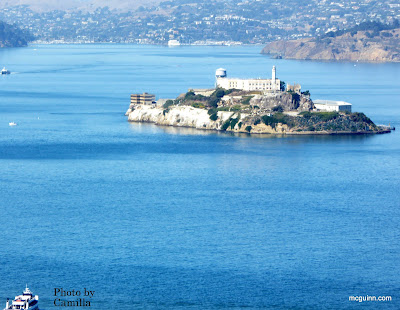 Coit Tower was the next place I insisted we visit. Yep, we walked the two miles up the steep San Francisco hills to the tower. Fortunately when we finally made it to the entrance, there was an elevator to take us to the top. 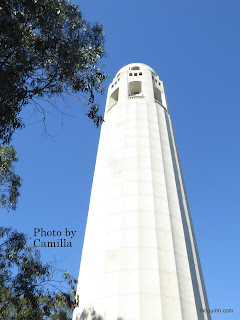 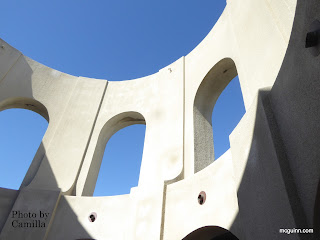 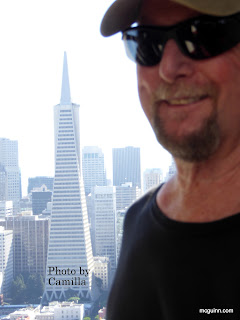 At the top of the tower, Roger asked teasingly, “Now Camilla, are there any other walks you want to go on for your birthday?

I quickly laughed, “Yes, I want to walk back to the hotel.” I did try to order an Uber, but Roger was having fun encouraging me to fulfill all my birthday fantasies.


The last hill was looming in front of us, when I saw the loading dock for the hotel halfway up the hill. A man was taking a break at the entrance and I approached him, “Is there an elevator that can take us to our room?” He smiled, “Follow me.” As he was taking us to the service elevator, he gave us a tour of the backstage area of the Ritz Carlton. We met the security officer, passed the Human Resources office and walked through a maze of halls. We got on the elevator and it stopped at the next floor. The concierge we had been talking to earlier got on. She was shocked when she recognized us. “What are you doing here?” “Oh, I was just applying for a job at the Human Resource office.” When we got to the lounge she told me to sit and she would bring me some cold ice tea. I think I probably looked like I had just climbed every hill in San Francisco. Wow, my husband is 9 years older and he looked great! He had champagne.

There was one more California date on the Central California coast where we used to live, The Clark Center for The Performing Arts in Arroyo Grande. The audience was filled with dear friends.

California Highway 58 was the road we chose to head east to Texas. The route took us on the back roads of California. It was a beautiful, stress free drive. We had five days to get to Houston for the concert we had re-scheduled. SO… it was still my birthday tour and there was one place I have always wanted to visit – Roswell, New Mexico, the home of the International UFO Museum. I took Roger to prison; I might as well take him to meet Mr. Spaceman. 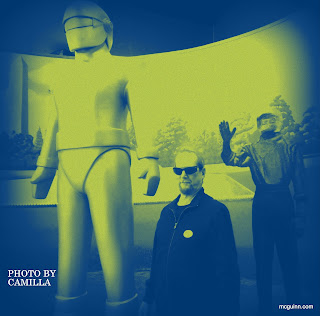 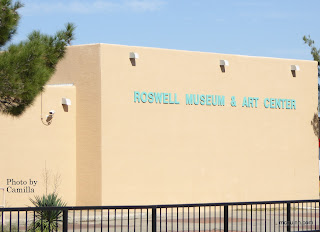 Roswell was a lot larger than I had imagined. It is the fifth-largest city in New Mexico, population 49,000- about the size of a Los Angeles suburb. A Hampton Inn and Red Lobster made it a perfect stopping place.

The UFO museum was funny and enjoyable to walk around but the real museum in Roswell is the Roswell Museum and Art Center because it has the workshop of the father of rocket travel, Robert Goddard. This museum is the real reason to go to Roswell. When the German scientists were being interrogated after World War II, one scientist asked the interrogators “Why are you asking me? Why didn’t you listen to Goddard? That’s where we learned everything about rockets.” Roger has always been scientifically minded but I jumped over that subject in school. This museum made me want to know more. We learned so much. Now it was time to head to the victory I talked about earlier. The Houston Astros had made it to the World Series. The Los Angeles Dodgers were standing in the way of their victory. I used to go to Dodger games, so I was a bit torn as to whom to root for, but Houston needed something to celebrate after the floods. We were jumping on the beds after Houston won.
We got to the outskirts of Houston the day before Roger’s concert. I talked to a lady in the hotel who had been living there since the floods had destroyed her house. She wasn’t sad, she was exuberant! Her team had won the World Series and she was going to the victory parade! What we didn’t realize was that there was going to be a victory parade in downtown Houston on the day of Roger’s concert in downtown Houston.


I checked the schedule of the parade and tried to time our drive to the downtown venue to avoid the crowds. I got that right, but after unloading our equipment, the parade stopped and one million people were walking the streets. The roads to our hotel were blocked off. After circling the streets, Roger got out of the van and explained to the police officer, who was directing the flood of traffic, that our hotel was right behind her, but the way was blocked. She opened the path. At last we were at the hotel and needed to eat before the sound check. Well thousands of folks wanted to celebrate and eat. This was another problem, but I found a way to get us food and as we ate in our room, we felt like celebrating too. We were a part of celebrating Houston’s victory! 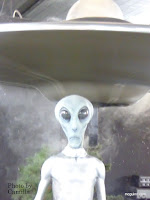 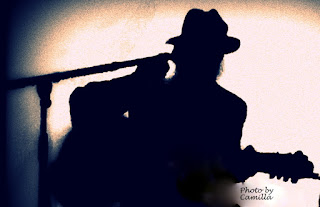