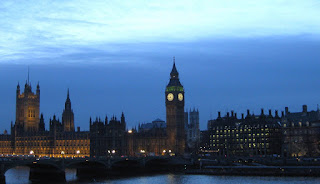 The BBC invited Roger to perform for their series called “Folk
America” being filmed at the Barbican Theatre in London, on
January 22, 2009. Nick Peel, Roger’s International agent, ironed
out all the details. Martin Guitar arranged for a Roger McGuinn HD-7, 7-string guitar. The promoter arranged for a pretty red 360 model 12-string Rickenbacker guitar and I booked the tickets.

Promoters usually balk when I tell them Roger's travel requirements, but then I find a deal they can’t refuse. I found one with Virgin Atlantic. On January 19, a Virgin Atlantic chauffeur arrived at our home to drive us to Miami. There is a direct flight from Orlando to London, but we call that the “kiddies’ flight.” A Virgin flight soaring to the "land of the mouse” is usually packed with excited little mouths, loudly proclaiming their presence.

Roger tells friends, "Camilla likes to be at the airport an hour before the airplane leaves the city it is coming from." I really don’t like running to catch a plane especially this time, since I was still in a "boot" with a broken foot. The car arrived at Miami International four hours before our evening departure to London. We happily passed the time enjoying a late lunch at the airport hotel.

The plane was only delayed half an hour before boarding. By 10pm, satisfied passengers were fed and dreaming in their Virgin Air pods.

When an airplane lands early in the morning, your hotel room is not likely to be ready. A wonderful perk of Virgin Atlantic, is the arrivals lounge. We had a leisurely breakfast before a driver navigated the streets of London to our hotel. On the way, traffic was stopped at Buckingham Palace for a small parade of the guards. We were the first car behind the march, so it felt like we were in the parade.

It was a day for parades. There was a big one happening in Washington D.C. Barack Obama was making history in America. This was one inauguration we didn’t want to miss viewing. 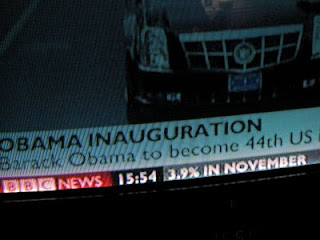 Years ago when we traveled in Europe, we always carried a short-wave radio to hear English news. Now with satellites broadcasting over many channels, television coverage of the inauguration was on every channel. We chose to watch the BBC coverage, because after all, we were in London. Jet lag hit before the inauguration parade, so we missed the Dave Barry moment of him being embedded. 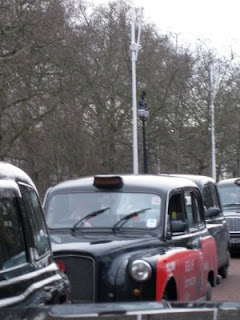 London is a great walking town, but with a “foot boot” on my right foot, we were relegated to the London taxis. Getting into one of those big black spacious cabs always makes me feel like I’m in a movie.

The BBC show featured four artists who walked the streets of Greenwich Village in the early 1960’s. Billy Brag was the master of ceremonies and Judy Collins closed the show. In between, Roger, Carolyn Hester and Eric Andersen echoed the sounds of the Village. Roger did add his acoustic version of “Eight Miles High.” He didn’t write it in the village with Gene and David,but it is a song about a trip to England.

1965
Jim McGuinn, Gene Clark and David Crosby were sitting in a mid-west hotel room strumming guitars while experimenting with an illicit drug of the time. Think of an automotive product.

Gene began playing a tune he had been exploring. He invited Jim and David to join him in writing the lyrics. After bantering a few ideas between them, Jim suggested, "Let’s write it about our trip to England."

The Byrds had just returned from their first concert tour of England. The promoter touted the tour to the press as "America's Answer to the Beatles." That one sentence cocked the guns of the British press. The group was the victim of target practice before the airplane even touched down.

Riding in limousines on the streets of London was exhilarating, overwhelming and wet. Culture shock bombarded the novice travelers immediately. The eccentricity of the press, the hectic pace of the schedule, along with a flu bug for Jim and Michael Clark, made the days and evenings seem like they were spinning out of control.

Derek Taylor, the Byrds newly hired publicist, had also worked with the Beatles. He arranged the first meeting with the Byrds and Beatles. The Rolling Stones came to their shows. Even though the press was slamming everything the Byrds did, the camaraderie of this small world of musicians was not affected by the petty rivalry being instigated by burning typewriter keys.

Back in the mid-west hotel room, Gene liked the idea of writing the song about the trip. His first question was how high the airplane was flying. Jim's love of aviation had the answer tucked in the recesses of his mind. "Let's do the math. around 33,000 ft divided by 5280 is around ... 6 miles high."

Gene pondered a moment. "No. I like the sound of 8 better than 6 because the Beatles wrote ‘8 days a week’."

Roger doesn't usually tell people about how images evolve into song lyrics, but this song was censored by radio because one person decided he 'knew' the theme of the song. The Gavin Report declared it was a song about drugs and encouraged it to be banned from airplay. It was banned by radio stations across the continent. Censorship was alive and flourishing in America. Even the Columbia Records mighty machine couldn’t stop that false accusation. The song was written while drugs were being experienced, but the lyrics were inspired by an historical trip to England. Here is Roger's explanation of the song words located in parenthesis below the lyric:

Eight miles high and when you touch down
You’ll find that it’s stranger than known
(The cultural shock they experienced)
Signs in the street that say where you’re going
Are somewhere just being their own
(The street names in London are posted high on the sides of the corner buildings, not on a post.)

Nowhere is there warmth to be found
Among those afraid of losing their ground
(The British press didn't like the promoters touting the Byrds as America's answer to the Beatles)
Rain gray town known for its sound
(Foggy, rainy London. The town Americans associated with the sound of the Beatles and the Rolling Stones)
In places small faces unbound
(The screaming little girl fans everywhere the group stepped)

We had one day off before our flight home. After an interview with Mandy Moore from BBC radio and a business meeting with Nick to discuss the summer tour in the UK and Europe, we set our course for a late lunch at a London landmark.

The food court at Harrods has high quality kitchens surrounded by seated bars. We have always been drawn to the seafood grill. As we walked toward our favorite corner, two seats opened up at the new Caviar bar. With one quick look at each other, we jumped on those empty stools. Watching the creative cooks, the United Nations of people strolling by and tasting the food in the bustling food court creates a memory easily refreshed by all the senses. 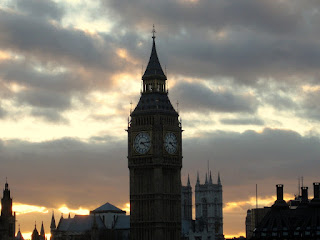 
Within a week’s time, we flew to London; joined a parade; watched an American historical inauguration on BBC television; filmed a show for BBC television; enjoyed an evening with old friends and watched the clouds float around the Tower of Big Ben.

Old memories and new memories; London is one of our favorite cities. We're looking forward to going back in June! 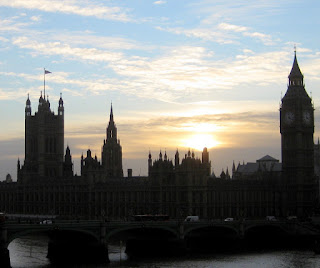