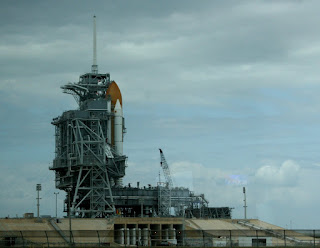 The Discovery on the launch pad. (Photo by Camilla)

Our attachment to Discovery began on March 13. I received an email from Linn LeBlanc, Executive Director of the Astronauts Scholarship Foundation, asking if we were going to attend the Astronauts Hall of Fame (AHOF) induction Gala on May 2, being held at the Kennedy Space Center. Her next question, “Would Roger like to play a set of three songs to conclude the gala?”

After a flurry of emails and telephone calls, Roger's performance was confirmed, but with an added bonus. Two former astronauts who were two of the founders of the astronauts’ band, Max Q, were going to join him. Robert “Hoot” Gibson and Brewster Shaw were going to bring their guitars and soaring harmonies to entertain the spacemen.

The rehearsal for the three songs, “Mr. Tambourine Man,” Mr. Spaceman" and "Turn, Turn, Turn" was scheduled for Thursday, May 1. Unfortunately, Brewster had a business commitment and couldn’t make it for the Gala, so it was just Hoot, who joined us in our hotel room to fine tune the music. He had been practicing at home and we were wonderfully surprised at how well his talent blended with Roger’s. 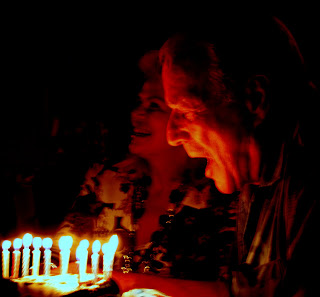 In the evening, dinner was served for all the astronauts, scholarship winners and their families in a very casual setting in the hotel. It was the beginning of a reunion of friends who had a very unique bond. It was also Mercury Astronaut Scott Carpenter’s birthday. 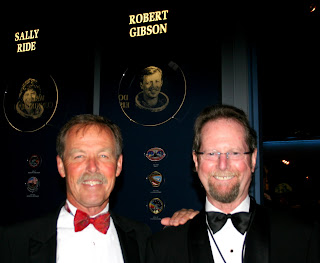 Friday was a busy day. More astronauts were arriving and meeting with the press. A VIP reception was held at the AHOF before the gala dinner at the ASVC (Apollo/Saturn V Center.) We donned our fanciest clothes and boarded the bus with the astronauts. Half way through the reception, Hoot, Roger and I were driven to the ASVC for sound check. This unique hall had been transformed into an elegant dinner venue. It wasn’t the first time we have had dinner under the Saturn V rocket, but we still looked up in awe at the massive machine.

At 7 pm, the attending astronauts and their wives were individually introduced as they walked the red carpet to their tables. Each astronaut joined a different circular table to have dinner with the people who had bought tickets. I enjoyed watching the look of excitement on the dinner guest's faces as their own astronaut approached their table.

William Parsons , Director of NASA’s Kennedy Space Center in Florida, was sitting to my left. His stories were fascinating but one theme became prominent in our conversation. This ex-marine was quick to inform me which astronauts were former Marines as they walked the red carpet. I realized that being the daughter of a career Navy man; it was my responsibility to point out to him that the marines were a branch of the Navy! This humorous banter with Bill continued all evening.

I have written in a previous BLOG about the AHOF and the reasons for this event. Yes, it is to honor these amazingly brave pioneers, but it is also to encourage students to excel in the fields of math and science. Each year, the AHOF awards scholarships to students based only on scholastic achievement in the sciences. That evening, the scholars who were able to attend - one even skipped his college graduation - were presented to the audience. Then the four astronauts who were being inducted into the AHOF were introduced: Loren J. Shriver, Bryan D.O’Connor, Robert D. Cabana, and John E. Blaha . 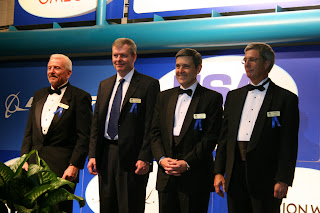 After an Omega watch raffle, to add to the scholarship fund coffers, McGuinn and Gibson took the stage. Roger told me it was such a hoot to be playing with an astronaut, for a room full of astronauts under a Saturn V rocket. He could see their faces and they were all smiling and singing along. 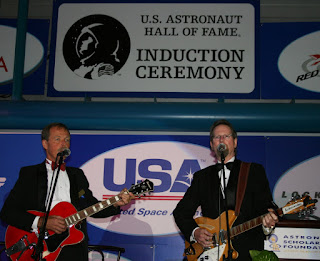 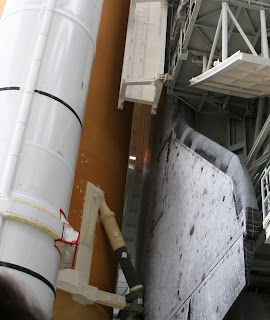 The next day held one of the biggest adventures of our lives. At noon we boarded the bus again with the astronauts and found ourselves transported to launch pad 39A where the Discovery Space Shuttle was docked and being prepared for the May 31 launch. No one had told us where we were going and once the destination announcement was made, the atmosphere on the bus became electric. Everyone, including the astronauts, was jumping with excitment. For the astronauts it was going home again, for us it was an unbelievable opportunity to be very close to a piece of history where only a few have traveled. 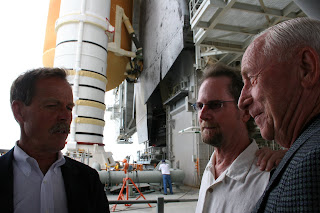 Hoot Gibson, Roger and Al Worden in the shadow of Discovery's wing.


The smiles on the faces of this group of astronauts, their wives and one star-gazing musician, as they scurried up and down the stairs of the launch pad, were as big as the 347-foot structure. I kept saying, “We’re like a bunch of monkeys climbing all over this thing!” When we stood in front of the shuttle door, a workman asked," Who are these people?" I laughingly replied, "Astronauts. Don't you recognize me?" The men who had flown into space surrounded us and they were all full of information. Walking encyclopedias, walking history. 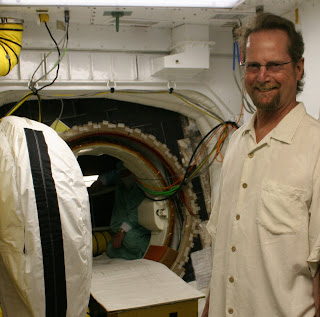 To top it all off, we got to stand next to the door that the Discovery Astronauts would enter for the STS-124 mission scheduled for May 31, 2008. I'm listening to that mission countdown on NASA TV as I'm writing this.

After being so close to the Discovery Shuttle to almost touch it - but it was too awesome to even put my hand in that direction - a bus took us to the ASVC for the Hall of Fame induction ceremony. It is a casual affair. An astronaut member of the AHOF reverently introduces an inductee and then proceeds to tell funny stories about the inductee's space antics. They honor and roast the new members at the same time, much to the delight of the audience.

If you ever plan a trip to the Kennedy Space Center, schedule it for the first weekend in May for this historical ceremony.

A final reception to toast the inductees was scheduled after the ceremony. But before this guild of space travelers dispersed, there was one last gathering - a private dinner for this family of astronauts and then the last moments in the private hospitality suite. This is where the jackets came off and the guitars came out.

Roger not only brought his guitar to the suite, but his “one laptop per child” computer. This little computer was designed to provide children around the world with new vistas. When the program first began, we were given an opportunity to buy one for a child and to buy one for ourselves.

Roger laid the computer on a table, picked up his guitar and watched as the astronaut who repaired the Hubble Space Telescope tried to open the computer. He carefully studied it, then opened the battery compartment. Roger began laughing and I jumped in to offer assistance. Even though I had used the computer, I realized I didn’t know how to open it either. Roger came to our rescue. I incredulously asked, “How do they expect children in third world countries to open it?” Roger smiled like an all knowing professor and assured me they had teachers schooled in instruction.

It was a good thing we had the OLPC computer. Everyone was in a singing mood. A familiar song was requested but we realized we didn't know all of the lyrics. The melody is so sweet we wanted to keep singing it, so Roger opened the computer and googled the words. We ended the night with the spacemen huddled around a laptop built to enlighten the world’s children, singing, “Amazing Grace.” 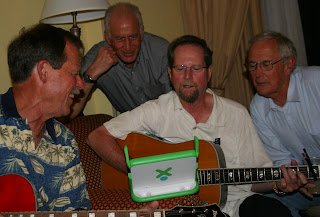 
The next morning, Astronaut Al Worden, chairman of The Astronaut Scholarship Foundation, shook Roger’s hand goodbye and said, “See you next year.”