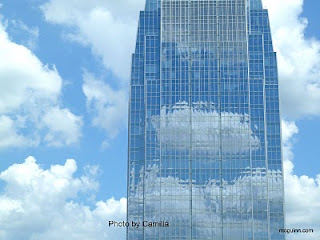 The month of May held three more adventures before summer vacation could commence. The first one was in Pittsburg to tape a concert for a PBS fund raiser. This was a gathering of friends; it definitely didn’t feel like work. Laughing with Barry McGuire and John York was delightful. 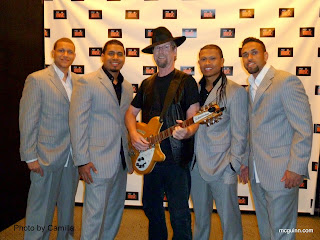 The producer of the show, T.J. Lubinsky, arranged for the group Ju-Taun to sing harmonies with Roger. These good looking men had all the female staff buzzing. I felt privileged that the young ladies confided in me which singer they picked as their favorite from the group. The guys were young enough to be my sons, so I picked all of them as my favorite.

From Pittsburg, we crossed the mountains for Nashville. 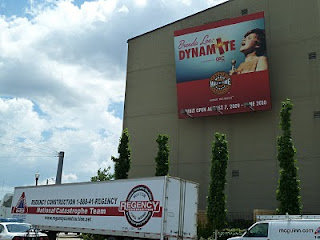 As we drove to our downtown hotel, we noticed big disaster relief trucks. The flood didn’t get as much media coverage as the damage warranted. Lives were lost, countless homes and businesses were significantly affected by the early May flooding. National landmarks including Opryland, The Country Music Hall of Fame and the beautiful Schermerhorn Symphony Center all had disaster relief trucks parked in front of them.

When we are in Nashville we try to connect with the amazing guitar player, John Jorgenson. John recorded on “Back From Rio” and “Limited Edition.” This time, John was in California for a “Desert Rose” reunion with Chris Hillman. While John was riding down Interstate 5, he texted Roger the story of coming home from touring Europe and finding his guitars covered in mud, diesel oil and sewage.
Many musicians lost not only their treasured instruments that were stored at Soundcheck Instrument Storage, but also their cars that were parked there while they were away on tour.

But with all the horrific happenings, Nashville was not whining. Nashville was rebuilding and the people were all pitching in to help their neighbors.
Roger had a concert scheduled at the Belcourt Theater and even though we offered to postpone the evening, the audience was happy the show went on.


The day before the concert our schedule was jammed packed with radio interviews at WSM, Sirius Radio and the live radio show “Live at the Loveless Café." 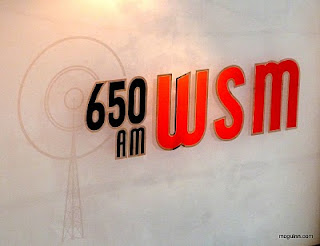 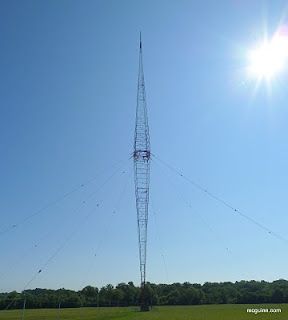 Radio station WSM is temporarily being broadcast from an original building by the radio tower because it was flooded out of its Opryland studio. Roger was hoping he would recognize it as the same studio he walked into in 1968, but it wasn’t the same building.

1968:
The Byrds always appreciated a country beat. Their albums ,“Turn,Turn,Turn,” “5th Dimension,” ‘Younger Than Yesterday,” and “Notorious Byrd Brothers” included a country influence with the tracks “Satisfied Mind,” “Mr. Spaceman,” “Time Between,” and “Girl With No Name,” and “Old John Robertson.” It wasn’t until, Chris Hillman met a young rich kid in a Hollywood bank that the Byrds knocked rock’n’roll out of the studio for a moment and headed to the home of country music, Nashville, Tennessee.

Roger and Chris were looking to hire a few more musicians. Roger wanted to take the BYRDS into the world of John Coltrane as he did in “Eight Miles High.”
When Gram showed up at the rehearsal studio, Roger asked him to play piano. He played a rhythm similar to Floyd Cramer. The performance didn’t blow Roger away but he felt they could work with Gram. Then they all got stoned.

After a musical change of direction was orchestrated, Gram’s dream was closer to reality when Nashville became the recording target for the next album. Cowboy hats were purchased, along with a black Eldorado.

It was a common practice for the Byrds to record a Bob Dylan song. The twang of Mr. Dylan could pass for a mountain kid or at least a hobo and sure enough he had a song to sing for this country inspired album dubbed, “Sweetheart of the Rodeo.”

The studio was filled with some of the best pickers in town. Earl P. Ball on piano, Lloyd Green and Jay Dee Maness on steel guitar, John Hartford on fiddle, banjo and guitar and Roy M. “Junior” Huskey on bass. There was also the six-string virtuoso, Clearance White, who later became one of Roger’s closest friends.

When the single was released, Roger made a journey to the famed WSM studios in hopes that the biggest country DJ in the country would play the chosen single from the album, “You Ain’t Going Nowhere.”

By then Roger had cut his hair and was trying to look respectable for the country gentleman. Mr. Emery played the single on a preview turntable, listened to the first verse, then turned to Roger and adamantly said, ‘I’m not going to play that on my show.”
“Ah..why not?”
“What’s it about?” Ralph flatly demanded.
Spellbound, Roger shrugged his shoulders and answered, “I don’t know. It’s a Bob Dylan song.”

Ralph grunted, and then proceeded to change his voice with a twang that would encourage the truckers driving down the highway to buy themselves a Clark truck seat.

A few months later while sitting in a London hotel room, Roger and Gram were reminiscing about that DJ who wouldn’t play their record in Nashville. They were roaring as they were mimicking his “trucker’s voice.” Ralph wasn’t a trucker… he was more like a drugstore truck driver, in the same vein of drugstore cowboys. That night a song was born, “Drugstore Truck Driving Man.” 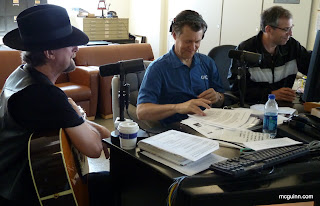 The “Sweetheart of the Rodeo” was a recording disaster in 1968. It was shunned by the rock and country stations. Time has healed the blow; it was listed as #117 in Rolling Stone's 500 Greatest Albums of all Time. The humor of the time is now welcome. The DJs at WSM, Bill Cody and Charlie Mattos, encouraged Roger to tell the “Sweetheart” stores for their country music audience. No one is offended anymore about a bunch of Los Angeles hippies who wanted to play in the country music mecca. The sounds have all blended.

At noon, Roger recorded an interview for the Sirius radio show Deep Tracks. 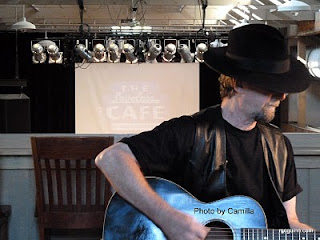 That evening, we went to the rolling countryside outside of Nashville to the Loveless Café. There Roger sang three songs as a guest artist for the radio show recorded live to an enthusiastic audience. One of the songs he sang was "Drugstore Truck Driving Man." During the performance, he began to feel remorse about a line in the song and didn't want to sing it. The line “he has him a medal he won in the war. It weighs five hundred pounds and sleeps on his floor.” slipped out even as he was trying to skip over it. The internal editing didn't happen soon enough.

Roger didn’t mention the problem until later at the hotel when I told him that all of a sudden during the show; I was hoping he wouldn’t sing that line in the song. I was thinking about my father’s medal from the Viet Nam war which was given to him because he came home on a stretcher, The Purple Heart. It certainly doesn’t sleep on our floor. That’s when Roger confirmed he didn’t want to sing the verse either. He now felt that he and Gram were too flippant and stoned when they wrote that line. What seemed funny for years, no longer did. He declared he wasn’t going to sing that verse again. 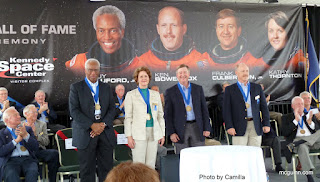 The Astronauts Hall of Fame ceremony was held on June 5th. A few hours before Guy Bluford, Jr, Ken Bowersox, Frank Culbertson, Jr and Kathy Thornton were inducted; we were invited to join a group of astronauts to tour the hangar where the space shuttles, Atlantis and Endeavour were being worked on.

Whenever we are blessed to be in the presence of Astronauts, we always try to be flies on the wall and that means that we are always at the back of the bus. We were the last ones off the bus for the tour of the hangar. The group was separated into five smaller groups. Since we were the last group, our guide asked which shuttle we wanted to see. I heard a voice behind me quietly say, “Endeavour.” I knew the voice of Hoot Gibson. He was the pilot of the 1992 Endeavour mission. The opportunity to closely view the space shuttle with him prompted me to say loudly, “Endeavour!” And so it was with great excitement that we walked around, under and over a space shuttle with an astronaut who had piloted it acting as our family photographer. 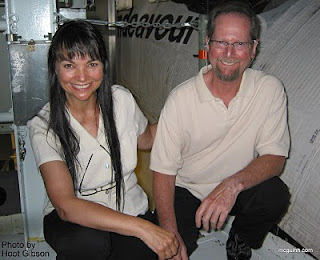 The month of June was gone before I had even unpacked or planted a lot of summer flowers. Today, I’m packing again. Tomorrow we are headed to Denver for the July 24th concert at the L2 Arts and Cultural Center. From Denver, we go to Tucson to celebrate the Special Lady’s 100th birthday! After that special celebration, Roger will have a re-union with Joan Baez as he opens the show at The Queen Mary Park in Long Beach California on August 13.

Come say hi to me at my “lemonade stand.” I love hearing your stories. 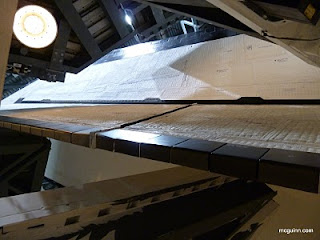 All photos by Camilla except the one by that Space Explorer as noted and the album cover of "Sweetheart of the Rodeo."