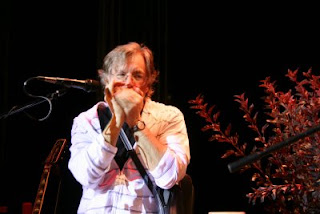 On Aug 4th we made a fun jaunt to Michigan and Ohio. John Sebastian and Roger were co-billing for two concerts. It's always a delight to hear John playing his wonderful Blues harmonica with Roger for a few songs. We have future shows scheduled with John - click the icon for ‘Tour Dates” on mcguinn.com for updates. An evening with these two storyteller musicians leaves a smile on everyone’s face.

Hurricane Fay began creeping northward from Naples, FL on August 18. The very day we had scheduled to initiate on our new PV solar panels to power most of our house’s electrical needs with the sun’s energy. The rain began ... it didn’t stop for five long days, but the panels worked! Even on rainy cloudy days, our system charged the storage batteries. Our two refrigerators were never in the slightest jeopardy of losing power. Almost everything in the house is now solar powered.

On August 30th, we conducted another experiment with the system. We totally disconnected our house from Progress Energy "grid." The air conditioners, the clothes dryer and the electric range and oven ceased working. We'd planned to see if a portable air conditioner could keep us comfortable throughout the night but guess what ... it rained all day. Hurricane Gustave’s outer bands showered our house. I did manage to wash four loads of laundry on solar power and hung the clothes up to dry on racks, but we didn’t want to take the chance of testing the portable air conditioner. The lights, fans and computers worked all evening. When the sun rose the next day, the batteries totally recharged. A new day dawned and a fresh source of power was available. It was so exciting!

In 1959 I experienced my first hurricane. We were living in Beaufort, South Carolina. My father was a Navy hospital corpsman assigned to the Marine Air Corps Air Station. He had to be on call at the medical dispensary during the storm. His wife kept the home lights burning alone with their two children, a 9 year old son and a 7 year old daughter.

My mother was the type of person who saw the adventure in everything. We never had time to entertain fear; we were having too much fun camping in the hall and playing games. Every so often, mummy would go peek out a small window to view the biggest oak tree in the Whole-Wide-World. Hurricane Gracie’s winds were blowing over 100 miles an hour. She had her eye destined for that big beautiful tree. 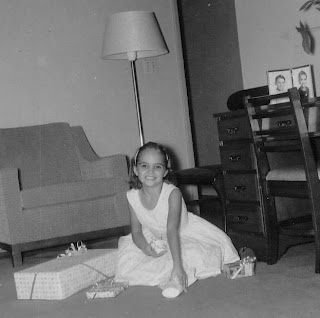 7 years old - my birthday in the Living Room before the big hurricane.

My brother and I were almost asleep, when mom gently shook us and whispered, “It's time to go next door.” She calmly handed us our clothes bags and told us to stand with her near the door. All of a sudden the wind stopped, she flung the door open, then firmly said, “Run to Pat’s house!” Wil and I looked at each with a quizzical look because it seemed the storm was over. Mom grabbed my hand and hollered, “It’s just the eye. It’s dangerous! Run fast!”

Pat saw us running and held her door open for us. Her four children were as excited as Wil and I; we now had playmates for the duration of the storm.

Mom and Pat played canasta while they watched that enormous, beautiful tree crash into our living room. The house was inundated with water.

The days following were the kind of days kids dream about. School had just commenced a new year but because the electrical lines were down, we had a two-week holiday. The neighborhood became a block party with community grills fired up every evening. The charcoal-fired pits were overflowing with a lot of good eating before all the food in the freezers defrosted.

That childhood event ignited in me a deep fascination with hurricanes. We experienced our first Florida hurricane during Labor Day weekend 1985. Hurricane Elena parked in the Gulf of Mexico for three days battering our coastline. Living in Florida provides many close encounters with the vast destruction caused by these cyclonic storms. I now balance my childhood excitement with an adult reality of potential disaster. 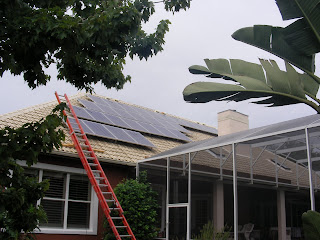 Solar panels have changed some of the rules for hurricane preparation. We still fill our gasoline tanks and water bottles, but I no longer have to buy enough ice to last for seven days. I mentioned to a neighbor how I felt a little guilty when I saw her lifting ice out of her trunk. She laughingly assured me we would have lots of company the next time a hurricane robs the community of power. Just like when I was 7 years old, we’ll have lots of playmates!

We are being asked if the solar panels will save us money. At this time the return on our investment will take a while, but we are convinced it is the right thing to do. This planet is a beautiful place to live. It's a good idea to become better stewards of its resources. Little things will add up. Roz Savage recently rowed from San Francisco to Hawaii in a small boat, one oar at a time. She's on her way to Australia.

Roz set out to raise awareness of the pollution mankind is causing. I never knew about the Great Pacific Garbage Patch before following her adventure. Now when I go to the grocery store, if I have forgotten my “green bags”, I buy one. Declining the plastic bags offered in the stores is a small step toward caring for the future.

There are other areas in our life where we try to move in a “greener” direction, but there are areas where we haven’t yet. It isn’t a matter of comparing ourselves to what others are doing; it's a matter of trying to do what we think is right when it is in our pathway to do it.

Photos- one by Roger, one by Camilla, one from Roz's site and one taken by mummy.