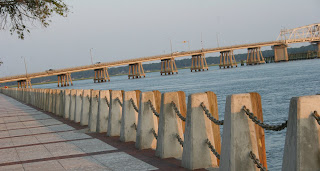 Beaufort, SC (photos by Camilla)
It’s time for our “creative Saturday” moments and I had planned to write about the concerts and the trip to Tarrytown, NY and Natick, MA. I'm always wont to use the photographs I take on the road to inspire the memories to spring forth. 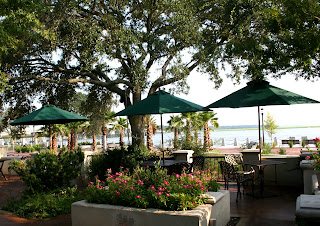 As I perused the pictures, I saw a photo with the view from our early evening dinner in Beaufort, SC. There was one of the bridges I’d crossed as a child. I was born in the Beaufort area, so was John Phillips of The Mamas and Papas. 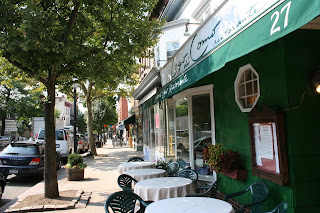 Then there was a charming shot of a street in Tarrytown. Roger went to elementary school in that hamlet.

There were lots of things to write about, but as I browsed the library of photographs, the sound of music coming from Roger’s studio kept me smiling. That music became my inspiration. All of a sudden, I knew that I was going to write a little bit about history and a little bit about the future. The harmonies coming from the studio were the voices of Roger and an old friend who had come for a weekend visit. They were singing this months Folk Den song, “The Boll Weevil.”

Barry McGuire was driving east on Sunset Boulevard in Hollywood when he saw Jim McGuinn heading west with his radio blaring the sounds of the times. Catching a glimpse of each other, McGuire immediately pulled over to the curb and McGuinn made a wild u-turn and pulled up right behind him. They both jumped out of their cars and sat on the fender of Jim’s black caddie. Jim left his radio on. 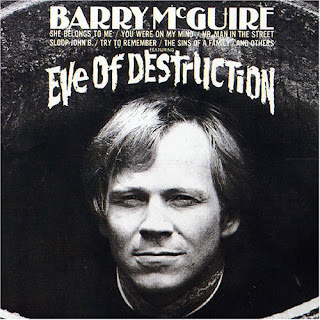 He had a good reason to leave his radio blasting because many of his friends were in the top ten playlist.
Barry's song “Eve of Destruction” was a number one hit in 1965 and Jim’s group, the Byrds, was soaring, with “Mr.Tambourine Man ” and “Turn, Turn, Turn.” These two friends had made it to the top of the charts within months of each other and their spirits were flying as high as their songs. 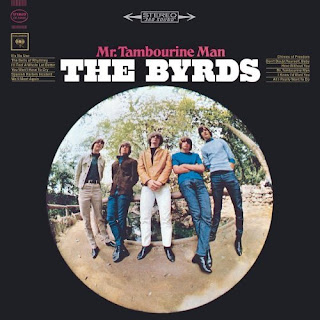 Their laughter quieted for a moment when they recognized a tune coming over the radio. It was The Mamas and The Papas’, “Creeque Alley.” John Phillips had immortalized his two friends in the lyrics of the song: “McGuinn and McGuire still a-getting higher in L.A., you know where that’s at.”

When the song finished, Barry’s loud joyous belly laugh could be heard all the way to the beach. Jim suddenly stopped laughing, turned to Barry and asked, “Hey man, where is it at?” Barry shook his head and said, “I don’t know, man... I thought you did!”
Jim replied, "Well don't tell anybody we don't know! They all think we know where it's at!"

More than 4o years later that friendship is still intact and even more amazing, they are both alive and they've finally discovered where it’s at!

The paths of McGuinn and McGuire took different turns in the road and now those turns have brought them back together. They are finally fulfilling a dream they once had – to make music with each other.

Barry came to Florida to have Roger sing and play on his "2.1" version of “Eve of Destruction.” It only took one evening for these two musicians to decide to take it on the road. Barry has been working with Terry Talbot (founder of the band Mason Proffit) for years, so it is a trio that is going to sing some old songs, sing some new songs and tell the stories of a generation on the stages of America.

Andrea Sabata, Roger’s booking agent, called and we excitedly told her to book a tour. We told her to call it McGuinn and McGuire with guest artist Terry Talbot.

Everyone has commitments until next October, but as my grandma used to say, “The Good Lord willing and the creek don’t rise,” McGuinn and McGuire will be singing together- and you know where that’s at! 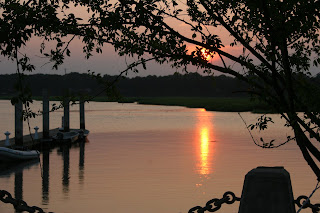