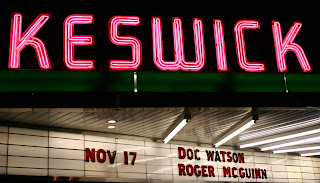 We had a week to unpack and answer a month's worth of mail before we hit the road again. On November 17, Roger was scheduled to perform at the Keswick Theater in Glenside, PA on the same bill with the legendary Doc Watson. Nothing like playing on the same stage graced by a legend, to get your adrenaline pumping. We were both excited all evening. I was delighted to hear people tell me after Roger’s show how surprised they were at his guitar technique. The audience was packed with Watson fans who came to see the fingers fly.

Saturday night we spent a quiet evening with our friends, John and Mary Ann, then arose early Sunday morning for a trip to New York City. Roger had an interview with Dave Marsh on Sirius radio. It was so close to Thanksgiving and because of the heavy seasonal traffic, we decided to stay and enjoy the holiday atmosphere of the City. 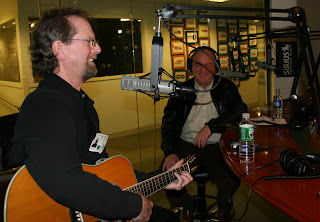 Dave Marsh and Roger at Sirius Radio. Photo by Camilla


One of our favorite hotels is the Sheraton On The Hudson in Weehawken, NJ. The view of Manhattan from this all suite hotel is incredible and when you want to go to the City, the ferry is easy to catch - right out the front door. The ferry docks after an enjoyable 10 minute cruise across the Hudson River at the West 39th St. terminal where there are free buses to transport you all around town. It is a real Epcot Center adventure - in the old days, I would have said it was an “E” ticket. Thanksgiving spent in New York is so much fun that we invited our friends to join us there for the celebration. Michael, the hotel concierge, arranged for us all to have rooms close together. 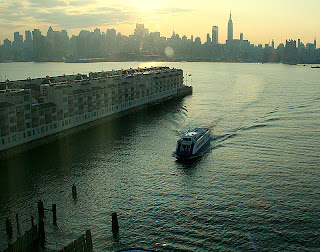 The view of the Ferry and City from our hotel room. Photo by Camilla

Two of our friends, Pat and Theresa, arrived earlier than the others because we promised them a “Roger McGuinn's 60’s Flash Back Tour of Greenwich Village.” On Tuesday morning, we all boarded the ferry and Roger began telling the story of how he ended up living in Greenwich Village.

After The Chad Mitchell Trio finished their opening show for Lenny Bruce at the Crescendo, Jim ( Roger) stood backstage smoking a cigarette leaning against the wall in the hall. Two men approached him and the shorter one began the conversation. “I’m Bobby Darin. This is Steve Blauder my manager. I liked your act up there tonight kid. Can you sing harmony? 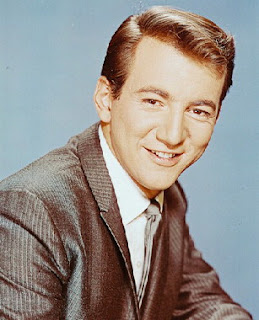 “Well, I’ve been thinking about joining the New Christie Minstrels.” Jim replied as he slowly stood a little straighter and lowered his cigarette behind his back.

Bobby shook his head, “You don’t want to do that. You’ll get buried in a group that size. How much are these guys paying you?”

Jim felt like a kid talking to the principal so he reluctantly told him, “Two fifty a week.”

It didn’t take long for Jim to realize that he was standing in front of “The Bobby Darin” who had just offered him a job for a lot of money. He dropped his cigarette on the floor, extinguished it with his foot, looked Bobby in the eye and asked, “When do I start?”

“Be at my house tomorrow morning at seven. Steve will give you directions.” Then Mr. Darin turned and walked away.

Jim walked in the front door of the house he was sharing with Art Podell and was handed a joint by Bob Hippard. Jim got a beer from the sparsely stocked refrigerator then joined them in the haze of smoke. Later they remembered Jim had been working that night so they asked about his gig. He told them about the Bobby Darin conversation. As he talked it all seemed unreal to him, especially the 7am directive to be at Bobby’s house. It was already past midnight and he usually watched the sun rise in the eastern sky before he closed his eyes for dreamland.

Art didn’t like the idea and kept reminding Jim that he’d joined the Christie Minstrels for the cover photo of TV guide. Bob took a different approached and encouraged Jim to go bed and to get up early. This opportunity was too good for a nineteen year old musician to sleep through.

Jim knocked on the door of Darin’s Sunset Plaza Drive house promptly at seven in the morning. Bobby opened the door, dressed like a business man, and directed Jim to the dining room. His authoritative manner made Jim feel very young even though Bobby was only a few years older.

Bobby told Jim to help himself to coffee and sweet rolls, then disappeared. The coffee was what Jim craved but it added to his apprehension. He didn’t dare move from the dining room, but he kept his eyes glued through the door to the rest of the house. Sandra Dee, Bobby’s pretty young wife, walked through the living room wearing a red sweatshirt and white shorts, obviously oblivious to the guest staring at her. Finally Bobby returned.

“Okay, Jim, this is what I want you to do. I’m going to add a folk segment to my show. I’ll do fifteen minutes with the band then I’ll bring you out. Then just the two of us will do a couple of folk songs. You’ll sing harmony and play your 12-string. You even get your own spotlight. We start rehearsals at the Flamingo Hotel in Las Vegas next week. Charlie Mafia will take care of all the arrangements. Write your phone number on that pad over there.”

Jim was stunned. He had brought his guitar to the house for what he thought would be an audition and walked out feeling like he had just been adopted by a rich godfather.

A week later, Jim boarded a plane with Bobby’s rhythm section bound for Las Vegas. He was still the youngest musician in the band but he had worked Vegas before with the Chad Mitchell Trio, so he had a little confidence. Rehearsals with Bobby were on time and intense. Darin was a perfectionist who didn’t tolerate sloppy habits. Jim was always on time with his black mohair suit pressed, his shoes shined and his guitar tuned.

On opening night, just before he was about to walk on stage and join Bobby, stage fright tapped Jim on the shoulder. He checked his guitar tuning and was horrified at the out of pitch strings. His nerves were distorting his sense of pitch and he frantically tried to get the 12-strings in tune before his entrance. Bobby began taking off his jacket, which was the cue to walk onto the dark stage. Jim tentatively moved to the center stage microphone and began playing “It Makes A long Time Man Feel Bad.” Miraculously the guitar was in tune. The song’s opening lick was fast and intricate. It required so much total concentration that the “stage fright monster” was forced out the back door.

Bobby walked over to his microphone. Two spotlights illuminated the two lone figures on stage as they sang the song together. Jim’s dream of singing and playing as a professional entertainer came to fruition that night. The audience exploded into applause.

In the audience that night, Sandra Dee was sitting with Peter Fonda, her co-star in “Tammy and the Doctor.” I wrote about that meeting in Roadie Report 8.

Jim became Bobby’s apprentice and followed him everywhere. Bobby was very generous with his mentoring and Jim wanted to know everything Bobby knew - from performing to everyday living. Bobby was always on the search for talent and Jim tagged along the night Darin saw the Newton brothers in a hotel lounge. Bobby told Jim that he was impressed with Wayne, but not the combination with the brothers.

Darin told Jim that the most important thing about performing was to get in front of an audience every chance you could. He said it didn’t matter how good you were in front of your mirror at home, you had to test it under fire. He also told him that the future was in rock ‘n’ roll.

Returning to Las Vegas as part of Bobby Darin’s show elevated Jim from accompanist to performer. One night after the Flamingo show, Jim went over to the Sahara to see Don Rickles’ show. Don recognized him and decided Jim would be a good recipient of one of his famous insults. “There’s a kid back there who works for Bobby Darin. He’s been in the business about two weeks and he goes around saying ‘I’m a star, I’m a star!’” Darin’s spotlight on Jim had brought him into the big arena.

Bobbie was very disappointed in Jim when he turned down the role of the banjo playing character in Jackie Cooper’s “Petticoat Junction.” Jim couldn’t see himself playing a Hollywood hillbilly. Bobby also gave Jim a lecture about showmanship. One night, after Jim’s part in the show, he joined his friends at a table to watch the rest of Bobby’s act. They had a riotous good time and Bobby noticed. After the show, Charlie Mafia, tapped Jim on the shoulder and told him to report to Bobby’s dressing room. Before he got in the door, Bobbie was yelling, “While I was on stage you were laughing and talking. You were showing me no respect!” It was a lesson Jim never forgot and to this day he is very careful when he is a member of an audience. He always listens and says very few words while someone is performing.

Jim toured with Bobby until the doctors told Darin he needed to slow down because of his heart condition. Trying to slow Bobby Darin down was like trying to stop a train. He needed to be working so he decided to move to New York City to concentrate on his publishing company, TM Music. He invited “skinny mcguinny”, his moniker for Jim, to join him in the famed Brill Building for the guaranteed fee of $35 week.

Bobby pointed out that even though it was a big cut in pay, he could do session work and play the folk clubs in the Village. “ You can buy a lot of cheeseburgers.” Those words were the only encouragement Bobby gave him to take the job. Once again, Jim took the job offered to him and Bobby Darin payed for his airplane ticket to New York City.

2006
Just as Roger finished telling the story of how he ended up living in the Village, the Ferry Bus stopped at Minetta Lane and the memories continued as we walked the tree line streets. 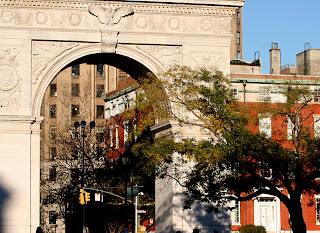