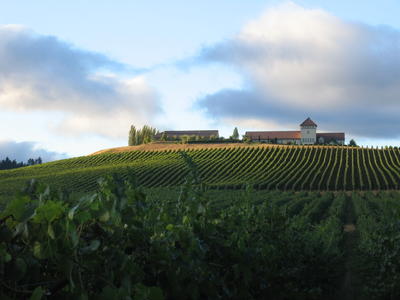 (The view of the vineyard from the cottage. Photo by Camilla McGuinn)

We drove through the gates of the King Estates Vineyard just as the sun was casting its evening shadows on the grapevines. The guest cottage is located between a pond, rows of vines and just down the hill from the winery which was built in the style of a traditional French Chateau. This was the third time that the King family had invited us to seek sanctuary at their lovely vineyard southwest of Eugene, Oregon.

Roger wrote about Ed King, Jr. in a previous blog. Mr. King built and planted this vineyard with his son Ed King III.

We had met Steve, the Director of Sales of the King Estates, at a wine tasting in Orlando a few years ago. The King Estates table was the first one we stopped at to sample the wines. The King Estates Pinot Gris and the genuine friendliness of Steve Thomson caused us to circle quickly back to King Estates' table. In the course of the evening, we mentioned that Roger was a musician and we exchanged email addresses. That night, when Steve got back to his hotel room, he called his wife Karen and mentioned to her about meeting a musician named Roger McGuinn. Karen knows more about music than Jann Wenner of Rolling Stone and was horrified that Steve didn’t recognize the name McGuinn. He emailed us the next day with sincere apologies.

I told Steve that I identified with his innocence of rock and roll history and told him my story.

In 1978, I began studying at an actor’s workshop in Beverly Hills, California on the same night that a quiet man with shoulder length hair joined the class. The teacher, Tracy Roberts, paired me with this man. I had just finished a 7-UP commercial and decided to quit my job and concentrate exclusively on acting. I wanted to work with someone who was serious about this class, so I asked the quiet man if he had ever worked professionally. He told me that he had been in Bob Dylan’s movie “Renaldo and Clara.’ I inwardly groaned, “ Oh no…he’s a musician.”

The scene we were assigned to study was from the movie “Blume in Love.” We coordinated our schedules to meet in two days to discuss the scene, then said good night and walked out to our cars. I noticed his California license plate was “BYRDS2.”

My friend, Gregg, who was doing his medical internship on the East Coast, called me the next morning. I told him about my new acting workshop and about this guy I'd met. I'd figured that the guy was a BYRDS manager or attorney because if he had been in the BYRDS wouldn’t he have had just BYRDS on his license plates? I didn’t have a clue as to how people applied for special name license plates. Gregg asked me his name and when I said Roger McGuinn, Gregg said, “Camilla, he was the BYRDS!”

Roger and I studied the scene together and then, love did bloom.We were married two months later on April 1, 1978.

We laughed with Steve about our mutual lack of rock history and a friendship developed. He began to keep track of our schedule through mcguinn.com on the internet. When he saw that we were coming to Oregon, an invitation was offered to stay at the cottage on the vineyard that was available to the distributors of the King Estate wines. 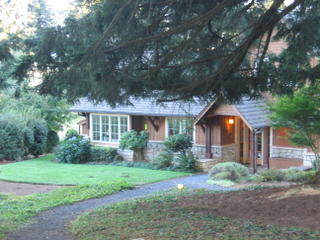 (The cottage. Photo by Camilla)

The cottage reminds me of one from storybook land and walking into it for the third time was like coming home.

The morning after we arrived, Steve took us on a tour of the vineyard. So much had developed since our last visit to the vineyard. The Chateau is being extended to include a restaurant and conference center. We have enjoyed the Chef’s fare of the vineyard and realizing that there will be a wonderful place for visitors to feast on gourmet delights, sip wine and gaze on the view from the chateau patio brought a laugh of delight to our conversation. 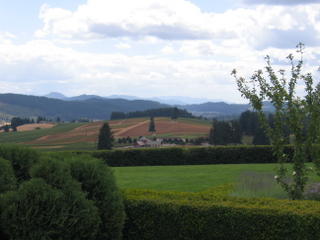 (One of the views from the Winery.Photo by Camilla)

There is going to be a farmer’s market on premise with only organic produce sold and a brewery is in the works. The King Estates Vineyard is now a certified organic dry vineyard. A dry vineyard is one that is not irrigated because careful planting of the vines make it possible for the fruit to flourish with the natural rainfall.

We had lunch with Ed King III, Steve, Karen, Justin King and his lady, Kari. The King family is fascinating. Ed King III guided the vineyard into organic farming. Justin King, Ed’s son, is an amazing guitar player who has just signed with EPIC records and Justin’s lady is the pastry chef for the vineyard. It is not only entertaining but also humbling to enjoy a meal with so much talent.After an incredible meal prepared by the chef who will be overseeing the new restaurant, we all said our good-byes. Ed gave us a DVD to watch in the cottage called “My Father’s Garden.”

Roger and I asked if it would be okay to walk through the vineyard back to the cottage because I wanted to take some pictures. Walking through an organic vineyard is a delight. There is no trepidation about inhaling or touching chemicals. 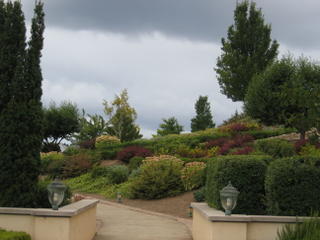 (A garden at the King Estates. Photo by Camilla)

That afternoon, we watched ‘My Father’s Garden.” It is a true story narrated by the filmmaker about her father’s orange orchard. In between the story of her father, she interjects stories about other farmers. Some of them were losing their farms but one of them made a bold move and turned his family farm to organic farming. The story was hopeful and heartbreaking.

The heartbreak: one dear elderly farmer broke into tears as his farm was being auctioned. All he ever wanted to do was to be a farmer but the cost and degradation of chemical farming had broken his dream. The filmmaker’s father, the focus of her story, died at a young age. His body just shut down. She has a poignant ending to her film with a picture of her father standing next to the spray of a chemical pest sprayer.

The hope: the organic farmer had not only turned his farm into a profitable endeavor but he had saved his soil from chemical ruin.

I quietly strolled out of the cottage after watching the movie and walked around the vineyard. I cried for a while thinking about the movie. I cried for the old farmer and I cried for the soil on which he toiled. At the edge of the vineyard was a fence covered with wild berries. They were the same variety of berries that my brother and I picked when I was 7 years old. He used to yell at me to stop eating them because we wouldn't have enough to sell to the neighbors for a quarter a quart. I looked at the wild vine filled with berries and then back at the organic vineyard. I picked a berry and ate it, and then I picked some more and ate them. They were growing in a healthy place and I could eat them off the vine. 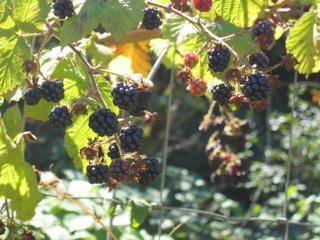 (The Wild Berries before I ate them.)


I captured the berries in the lens of my camera as I enjoyed their sweetness. There is a Psalm that tells us that God gave us wine to make the heart glad and I think Oregon has been blessed with the King Estates to make the earth glad.