It is the middle of July 2016 and I'm just now thinking about the sweet memories of the second half 2015. In fact I have to go back to my calendar to see what we did.
In the early part of the year, we were touring on the highways of the USA.  I had the opportunity to visit with the family of one of my dearest friends who died suddenly just after Roger and I were married. Her mother and brothers came to a concert and I spent all the time I could with them telling them stories about the escapades that Annie I took in the early 70s.
In August we escaped the heat of Florida for the unusual heat of Hawaii for a tour of four of the islands. Our first stop was in Kauai and it was the beginning of visiting with friends from the past.
The first day in Kauai, we got a call from Richard, Tom Petty’s road manager, inviting us to dinner at Al’s house, Bob Dylan’s production manager. Roger had enjoyed touring with both of them on the “Temples in Flames Tour” in 1987. He often tells the story of how he was invited on that Dylan/Petty tour in his concerts.
It was a delightful reunion but what I found even more fun was meeting their families. When touring with an artist, the road crew is always focused on the artist. I didn’t even know Richard and Al were married, but married they are - to beautiful women. Al’s teenage daughter reflected the beauty of her mother. The evening in the cool breeze of the island mountain was like visiting favorite relatives.
I was sitting next to Richard and confessed to him that before each tour I always ask myself if I remember how to be a road manager. He confessed he does too, but I think his answer was a sweet way to make me feel comfortable. They all came to Roger’s concert the next night. I was really more anxious about forgetting something important because these pros were going to be in the audience. When I finally finished my duties and went to the dressing room they were all there continuing with the good feelings we’d had the night before.
As I mentioned earlier it was unusually hot in Hawaii!  The time in Oahu wasn’t so uncomfortable because the hotel had air conditioning and so did the restaurants, but when we got to the house I found on the Big Island, air conditioning wasn’t to be found anywhere. 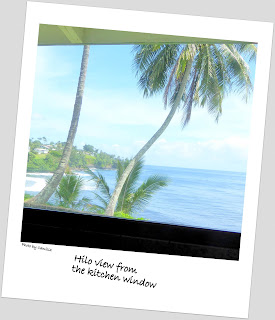 The house was beautifully situated on a cliff overlooking the ocean. It had a wonderful kitchen and a washer and dryer. Three days of cooking and eating romantic meals while looking at the view seemed like heaven. We were told that air conditioning wouldn’t be necessary because of the ocean breezes. We lived for years on the beach in Florida with just ocean breezes, so I didn’t think it would be a problem. Well, it was very hot and even the two theaters Roger performed in were hot! No air conditioning. Roger was the consummate pro sitting under the stage lights in the heat but he was a bit wet after each show. I was so completely soaked after one sound check that I had to change to a venue t-shirt. Now I had a nice souvenir to take home.
Roger had been to Maui before, but it was my first time. They have a great radio station where they can play anything the DJ wants to play. That was a fun interview. The theatre was air conditioned but the treat for the night was a visit from Roger’s old friend Peter Fonda. After the show Parky, Peter’s wife, and I were just amazed at how excited the two of them were remembering the stories of the past. They hadn’t seen each other since the late sixties.
Speaking of the sixties, in September we drove to California for a west coast tour and were greeted by another old friend, Barry McGuire. We have kept in touch with Barry over the years, but this was the first time he and his wife, Mari, had seen “An Evening with Roger McGuinn.”  The sound of Barry’s joyous laugh coming from the backstage after the show could be heard all over the venue.
Time never separates old friends, distance does. I’m so glad we travel.
Another old friend popped up on this tour. In California, we were staying at a hotel which is across the street from our new publishing administrator, Wixen Music. Randall invited Roger to use his conference room for the video interviews I had arranged. After one interview, Roger went back to the hotel and I decided to go shopping at a favorite store in the nearby enclave of California fun.
As I was walking, I heard a man’s voice behind me talking on the cell phone. I felt he was a little too close, but was sure he would keep going when I entered the small boutique store. He followed me into the store! I quickly turned around and he said, “Camilla, you know me.” I stuttered, “Of course I do. Who are you?”
“Randy Gerston.”
Wow. Randy was the A&R man who took Roger to Arista records. He looked a lot different from the young, long haired man in 1990. It was good to see him and we both were talking a mile a minute. Then he showed a photo of himself during his search for the meaning of life. He was wearing the orange of a Buddhist Monk. It was very interesting to hear his path. He was no longer a monk but the disciplines were still part of his life.
Randy’s office was in the same enclave, so Roger and I went over the next day and had another delightful reunion. I was particularly happy for the chance to talk with him, since the parting from a record company can be difficult for all parties and I wanted him to know that we really did like him.
Our November experiences included Detroit, Tokyo and Osaka. In Detroit, we joined Mitch Albom for his release of “the magic strings of Frankie Presto.” Roger was one of the real life characters of the book.
For Thanksgiving we had sushi. The concert in Tokyo was attended by the reps from Martin guitar. They brought a 7-string for Roger to play during the Japan concerts. We really don’t like carrying guitars on airplanes. 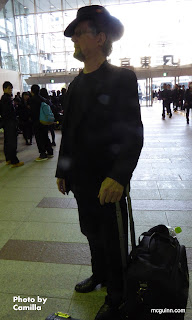 From Tokyo we took the Bullet Train to Osaka. The hotel was connected to an amazing mall that had an “adult food court.” That is what the concierge at the hotel called it. We realized the adult part was the cocktails that were available. There were so many places to eat, but there was one restaurant that had a long line of patrons waiting to get in. That was our clue to get in line. It was the best sushi we have ever had!

We have always appreciated the sweetness, politeness and the trusting attitude of the Japanese. We were amazed to see bicycles in both cities sitting on the sidewalks unlocked.


We thought we were going to spend Christmas at home, but a last minute call from Tim telling us that the lecture department of the Queen Mary 2 was asking if Roger would be interested in coming on board for two lectures during the Christmas voyage to the Caribbean. How could we say no? We love the neighborhood of the Queen Mary 2 and had been on the Christmas voyage before. In fact it is a voyage that many people repeat, so there were old friends everywhere.

2016 began on the ocean and we never have any idea where it will end. We like the adventure of not knowing. We do know one thing about 2016; it is the Twentieth Anniversary of the Folk Den. We spent most of the year re-recording another 100 songs for the 4 CD set of the Twentieth Anniversary Edition. It will be released on Roger’s 74th birthday, July 13. Go to mcguinn.com for a link to CDBABY for a copy. Just click on the blue CD cover. It is a nice compliment to the first Folk Den Project with the red cover.
I would like to thank  my 13 readers for being so patient waiting for this BLOG to get written.