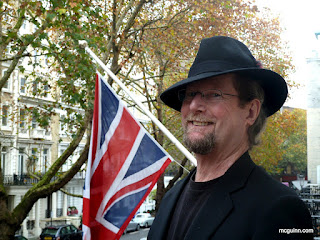 To all 13 of my dear and faithful readers...I apologize for being absent for such a long time. The year 2011 was exciting and hectic! We worked from Tahiti, England, the Netherlands, Argentina, the Caribbean and of course on the roads of the USA. I barely had time to do the laundry. Right now we are in Richmond, Virginia and when we get home I will be writing about those adventures. In the meantime, here is a letter we received about a St Patrick's Day celebration. It touched our hearts and gave Roger encouragement that his love of folk music is also appreciated by others.

I thought you might like this story. Saturday on Saint Patty's Day, Linda and I went to a nice pub here in Doylestown, Pa. We arrived around 7pm and things were going pretty good, still not quite at the peak it would hit after 9pm. Anyway, I know the folks who run the bar well, and the bartender (Kevin) was putting cds of Irish music on in the background. I brought a cd with me that I had made up, it features some of your best Celtic and Whaling songs. I got Kevin to pop it in. The 1st track is Molly Malone and it drew some attention from the patrons. The next track is Let The Bullgine Run, well this really got the crowd clapping and stomping. To make a long story short, we went through Welcome Paddy Home, Paddy West, Polly Von, John, John and many more, people were asking who were the musicians, and I was spreading the word about the former founder of The Byrds who records a free song a month for the Folk Den on his website. I'm sure you'll be getting some new visitors this week. The best was when The Great Silkie of Sule Skerry was playing, there's an older gentleman who was born in Inverness sitting at the bar. I've known him for years, a lovely man indeed, who happens to be the top car mechanic at a local Porsche-Audi dealership. Everyone calls him Scotty, well Scotty had tears in his eyes as he listened to The Great Silkie. He and I talked a bit about it afterwards, he explained how he had grown up listening to the song, and that your version was one of the finest he had ever heard. This week I made Scotty a copy of the song along with others and I'll be giving it to him tomorrow night.

So, just an example of how your music affects people and can make a great Saint Patrick's Day even better! 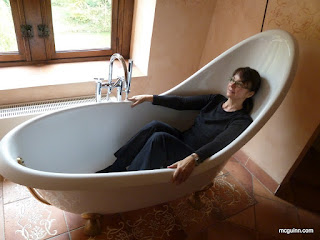 Ah..just give me a moment to rest.