Roadie Report 77 by Camilla McGuinn- "A Hurricane, A Flood, A Friend, A Fire and A Victory!... Part 1 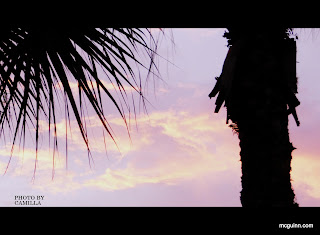 Hurricane Irma was moving up the coast of Florida after leaving destruction in the Caribbean. The time was approaching for us to hit the road for a two month concert tour and it looked like we were about to join hurricane evacuation traffic again. We had experienced hurricane evacuation traffic before because when concerts are booked we can't take the chance of all the lovely trees in our neighborhood blocking our exit for days. The idea of taking nine hours to get to the Georgia state line in bumper to bumper traffic held no peace with us. We waited to leave until the day before the wind was predicted  to touch our homestead. That decision is frowned upon by folks in the know but I noticed that all the coverage of destruction from the recent storms had the highways jammed for days.

On September 9th, we loaded our equipment in the van and began driving around 10:am. As we drove onto the Florida Turnpike there wasn't a car or truck to be seen. It was the fastest drive to  Georgia ever. Several days before, I had reserved a hotel room in Valdosta, Georgia. When I was checking in, the desk attendant would answer the constantly ringing telephone with, " We have no vacancies. Valdosta is booked for the night."  The elevator to our room was filled with people. I asked one man where he was from.
"Orlando."
"When did you get here?"
"Yesterday. It took nine hours."
I said a silent prayer of gratitude.

The next morning, we took the back roads to Montgomery, Alabama. The local radio was reporting school closures. The storm was right behind us.

We made it to Paducah Tuesday afternoon listening to the weather warnings all the way north. We haven't stayed in Paducah for years because we weren't very impressed the first time we stopped there. The Tennessee and Ohio rivers have a tendency to flood at that junction. The city erected a very high wall to keep the flood waters off the streets and out of the houses. 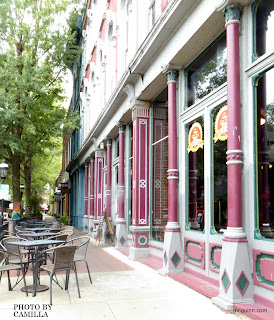 That seemed to take away some of the beauty but during this stop we saw a town that was revitalized, quaint and a delight to walk around. There was a new hotel downtown and lots of restaurants and antique stores. Our early dinner at Shandies was prepared especially for us by the chef who stopped by our table and asked us if there was anything we wanted. I wanted to combine a few menu items and take away a few others. 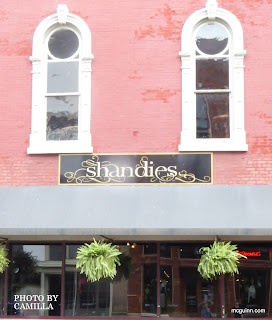 The chef knew exactly what to do. Wow...Paducah had changed a lot in the ten years we had been passing by.

We were taking our time getting to Minneapolis because Hurricane Irma made us leave earlier than necessary. We arrived very relaxed, though a bit concerned about our home. Our neighbors were in touch. Even though the power was out for three days, Mia our 13 year old neighbor next door, figured out that they could talk to us on the battery powered  "Ring Doorbell." The only problem, they rang the bell just when we were at a pit stop. I checked my phone video and saw two young girls saying, "Hello, hello." It turned out the other young girl was Mia's mother. I think that says I'm getting older... well we were celebrating my 66th birthday on this tour. 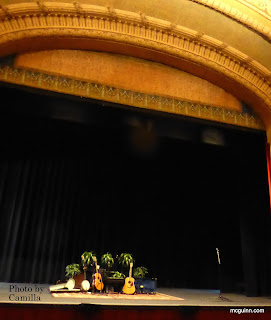 The Pantages Theater in Minneapolis is beautiful. Just the type of theater in which Roger loves to perform his one man play. The next concert was at the beautiful Stefanie H. Weill Center for the Performing Arts in Sheboygan WI. This theater is run by two staff members and a whole town of wonderful volunteers. I loved hearing about their special events.

We stayed at the historical, "The American Club." This hotel was built by Walter J. Kohler in 1918 to house the immigrant laborers who came to work at the Kohler Co. The garden was being prepared for a wedding when we arrived. There is a museum next door but we didn't have time to explore it. I'm definitely going to make time when we get another chance. A museum of Kohler kitchen and powder rooms...of okay...bathrooms. Thrones everywhere!
I love kitchens, cooking and the thought of remodeling our bathroom.

I was real excited about our next special stop. We were staying in Natchitoches and they finally got a hotel downtown. As the GPS was navigating us to our hotel address, Roger commented that he thought Natchitoches was in Louisiana not Texas. My mouth dropped open. It is in Louisiana! Where did I book our hotel?

The Fredonia Hotel is in Nacogdoches, TX. Well with the names spelling so close, anyone could make a mistake like that! We arrived early enough to explore the town. As we were cooling off  from the hot weather, the locals helped clear up the mystery.

Natchitoches and Nacogdoches were indigenous American twin brothers. Their father pointed one east and the other west so they wouldn't fight with each other. Two towns were born. That's their story and they're sticking to it.

The Houston Theater was scheduled for September 21st but the promoter agreed with me that a flooded town probably wasn't in the mood for a concert, so we rescheduled it for November 3rd. It would be on our way home from the two month west coast tour. There is more to tell about that night in part two of this blog.

Austin wasn't affected by the hurricanes, so we headed to the Lady Bird Lake (formerly called Town Lake) hotel where we could see folks gather in the evenings to watch the bats. 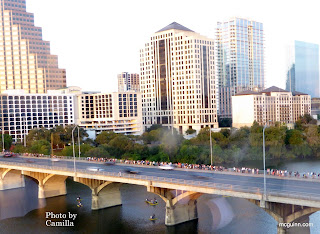 One night of bat watching ... then it was time for the Paramount Theater concert.

There is a lovely drive from Austin to Fredericksburg Texas where we always love to stop at the Hampton Inn & Suites so we can walk to the Navajo Grill for dinner. I've written about this before.

Driving through Texas is fun! It is the wild west and the speed limits go up to 85 miles an hour. Our Ford Transit conversion van handles the curves and speeds like a sports car.

We had a week before the next concert in Aliso Viejo, CA and since this was my birthday tour, I booked a hotel I have always wanted to stay in, The Ritz Carlton in Laguna Niguel. 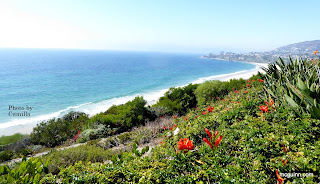 We had two days to enjoy the views and our new friends Terry and Kevin. We met them over hor d'oeuvres and became fast friends. They are even from a town I went to school in, Cary, North Carolina. We had fun reminiscing about Ashworth's Drug store's hotdogs.

We migrated to Aliso Viejo on the day of the concert and were delighted with the enclave where our hotel was located. So much so, we decided to spend another night there. Then we did something we seldom do ... we went to a movie theater. Usually we avoid them because it was invariable that someone behind us would be coughing and a cold for a singer can be devastating. We saw "American Assassin". Very unrealistic but a touch of the James Bond flavor, so a sequel must be coming.

The Ruth B. Shannon Center for the Performing Arts at Whittier College was our next concert venue. We checked into the hotel the day before the concert. As I was checking my email, I gasped. A friend was sending condolences about Tom Petty.

We didn't know what had happened, so we immediately began reaching out to people who might know.

It took awhile. The initial reports were wrong. Tom had not died but he did a while later. We couldn't believe it. My email was inundated with interview request wanting comments about Tom, but that was the last thing Roger wanted to do. He wanted to reflect on the life of his friend quietly.

Roger did want to talk to Chris Hillman. Chris had just finished recording with Tom and was on the road. When we connected with him, he was devastated and wanted to cancel his tour. Roger told him that Tom would not have wanted him to cancel his tour but to go on stage as a tribute to Tom.

I reflected on sitting backstage at a table with Tom during the Songwriters Hall of Fame ceremony. Tom had invited Roger to induct him into the Hall of Fame and sing "American Girl" for the ceremony. Tom and I talked about some of the silly fads going around but when he talked about his granddaughter, Everly, his eyes lit up. I was so sad to think that Everly would never get to fully experience the depth of his love for her. I was also sad thinking about Dana, Adria, Kim and all the people who were very important parts of the vast Petty machine. There is a great empty hole in the universe now and in our hearts. 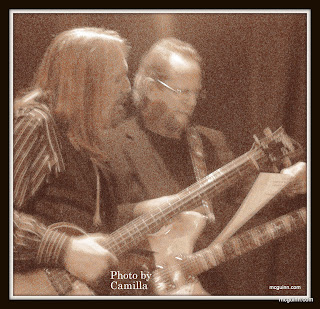 Roger has often had a segment in his concerts with a Tom Petty set. It includes stories and songs of their first meetings and touring together. From now on those songs and stories will always be in Roger's concerts. He will always celebrate the life and music of his dear friend.