Roadie Report 68 by Camilla McGuinn. A Train, A Ship, A Taxi, A Bridge Over Troubled Water and BOOT CAMP!

When we hugged Laraine goodbye, we were confident that she and Phil understood the gadgets that ran our house. The solar panels, the newly installed electric hurricane shutters and the outside kitchen.

We arrived at the new Winter Park Train station with plenty of time to appreciate the quaintness of that small town. 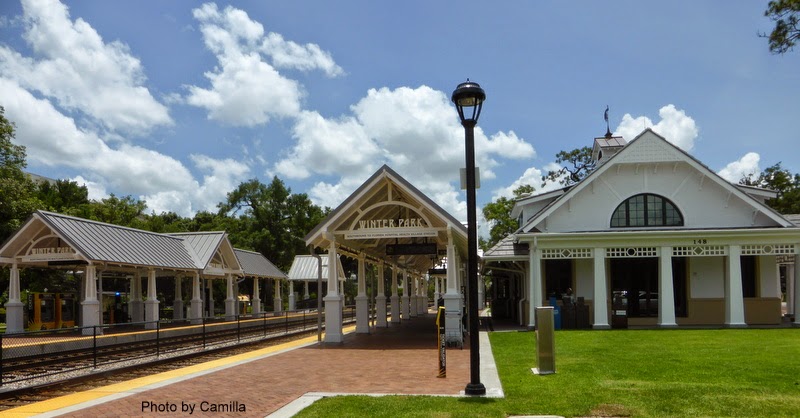 Train 98 to New York's Penn station was a familiar one but this time our ride over the rails was the smoothest ever.

Waking from our overnight trip we stretched with a sigh of contentment from a restful dream time.

The secret to getting a taxi from Penn station is to request a redcap to meet your train. He is able to take you to the front of the taxi queue but sometimes you do have to wait for him to arrive.

Boarding the Queen Mary 2 in Brooklyn was like coming home. Roger was greeted with enthusiasm by the baggage handlers. The fans in New York have always been a boost to our moral. Someday I think I will write an entire BLOG on the delightful encounters we have had with them. 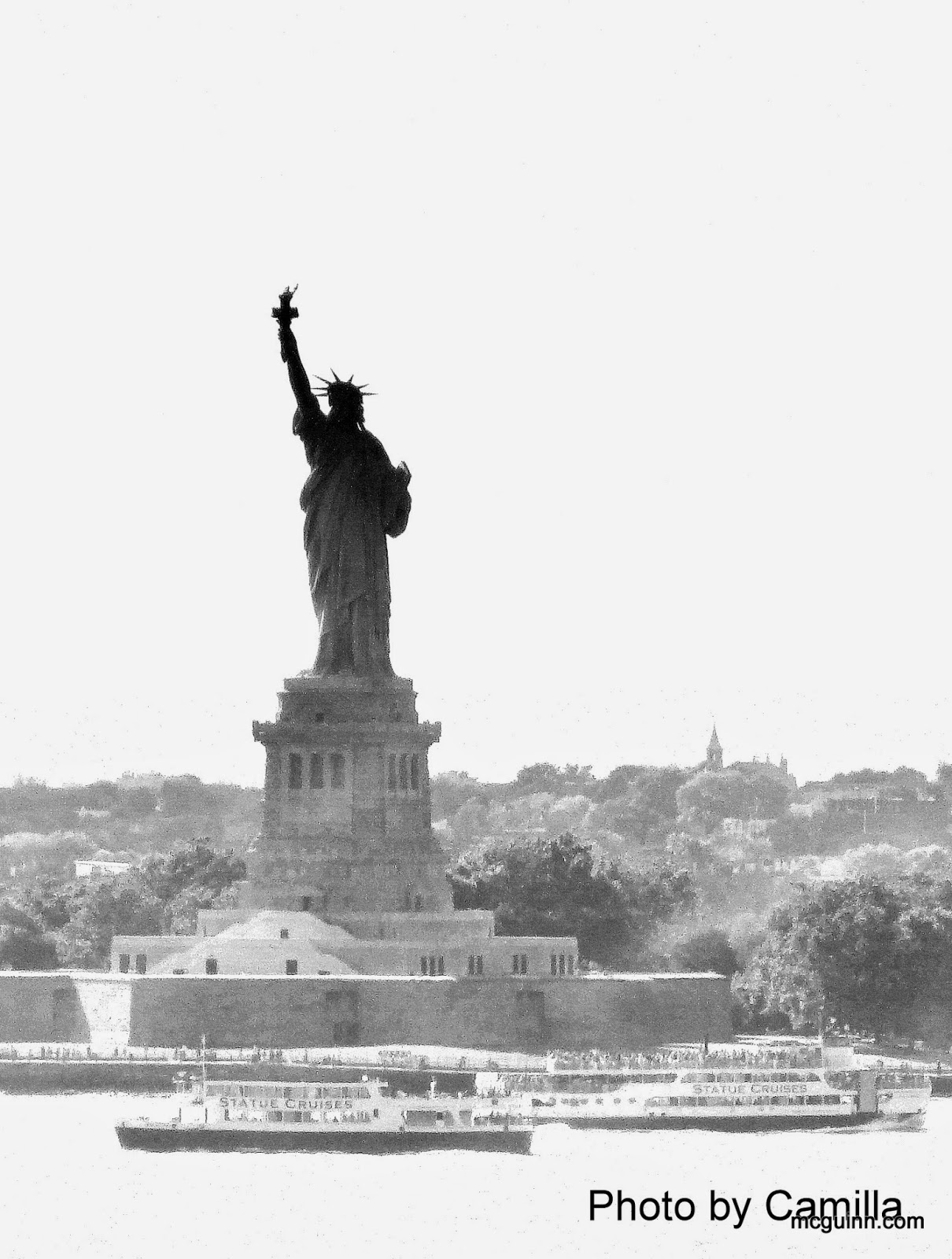 Once onboard, our habit is to drop our bags in our stateroom, head for the dining room to find our table for the voyage and enjoy the first meal of our journey.

The Queen Mary 2 is a small neighborhood filled with interesting people and one of the delights of a voyage is getting to know the people. We always ask for a large table.
Our maitre d' gave us a table for six. After the staff introduced themselves our table mates began arriving. Gerta and Herbert were going to Hamburg to see Herbert's home town. Bill and Marilyn were cruising round trip on the Queen Mary 2 with stops in Norway’s Fjords. Their seven children now joked that they had no idea where mom and dad were these days.

It took about two nanoseconds for all of us to realize that the maitre d' had matched us perfectly. Before the lunch was over, Bill, a retired mathematics teacher and high school coach, had a word puzzle for us to decipher. We all sat there an extra long time trying to figure it out. Initially, I was concerned that Gerta and Herbert might be put off because English was their second language, but they jumped into the challenge faster than we did. 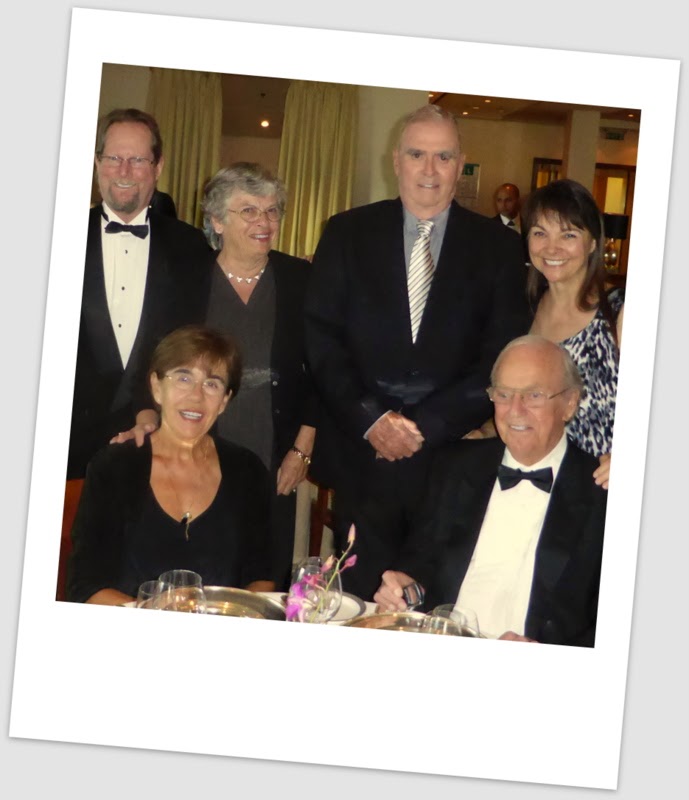 Over the course of 8 days we learned so much from our new friends.

Gerta and Herbert live in Winston Salem, NC which is a short distance from all my relatives. The stories of their lives are fascinating. A friend of Herbert's even wrote a book about his life. They were taking a copy of it to Hamburg for one of his nephews. I begged to read it. I told them that I read real fast and would have it back to them quickly. I even took it to Roger's lectures to read while I waited for the lectures to begin.

Reading Herbert's life story was as eye opener for me. Just as in the sixties when young men were trying to find ways out of the American-Vietnam War, Herbert was trying to find ways out of joining Hitler's war. He and his father figured that if he joined the Navy, he might have a chance of surviving the war. As WWII reached its last days, he walked into an American camp and surrendered. Not all Germans were Nazis! The reality that nations go to war at the cost of the young lives always hits me square in the face.

The July 28th crossing on the Queen Mary 2 had dual purposes. The main one was to get us to Europe for a tour that would finish in November. While onboard Roger would give two lectures. I always tell folks that Roger's concerts are the sound tracks to his lectures. The lectures include photos and video clips from the 50+ years of his career.

Once we reached England, Roger had radio and press interviews to promote the concerts that were scheduled for Belgium, Germany, Austria, England, Wales and the Netherlands.

The twenty days in London presented an interesting challenge.

A few years ago we spent 15 days in San Francisco in a condo I found for us on Nob Hill. I was sure we could recreate a similar experience in London. I scoured the internet until I found what I thought would be the quintessential English experience.

I found a site that had a  flat in Kensington with some of the quirkiest photos I had ever seen. I wasn't sure Roger would be comfortable for 12 days with some of the fixtures, but  when he saw the interior shots, he immediately told me to book it.

The flat wasn't available for all of our London time but we had lots of Marriott and Hilton frequent guest points, so I bookended the stay at the flat with several different hotels.


While moving from one hotel to another, I put a bottle of water in my handbag. I didn't notice, the cap was loose. When we got to our new room, my iPad and camera were now pieces of hardware that didn't work. My only gadgets still working were my iPhone and my computer. Life just got simple.

The day we were to move from one of the hotels to the Kensington flat, a 100 mile bike race was taking place in London. We needed to get to the other side of the Thames. After a long wait, the doorman found a taxi driver who had just begun his day. Unfortunately, he hadn't done his homework. Every bridge he went to cross over the Thames was closed for the bikers. The meter kept ticking higher and higher. Finally we came to another closed bridge and the driver said, "It's a shame you have this luggage. Your flat is just over the bridge."

The meter was reading 40 GBP = $68.00. We took one look at each other and nodded. We could do it. Our bags consisted of two small roll a-boards, two computer bags, two guitars and two small bags for miscellaneous items such as a dead iPad and camera.

As the taxi pulled away, we loaded the roller boards with the clever way we had devised for moving our bags throughout Europe on the trains.

The initial walk over the bridge was up hill. That was the first time Roger commented, "We're in boot camp!"

Going downhill was easier, but the weight of the bags was cutting off the circulation to our fingers. Stopping every block to change hands became a necessity. 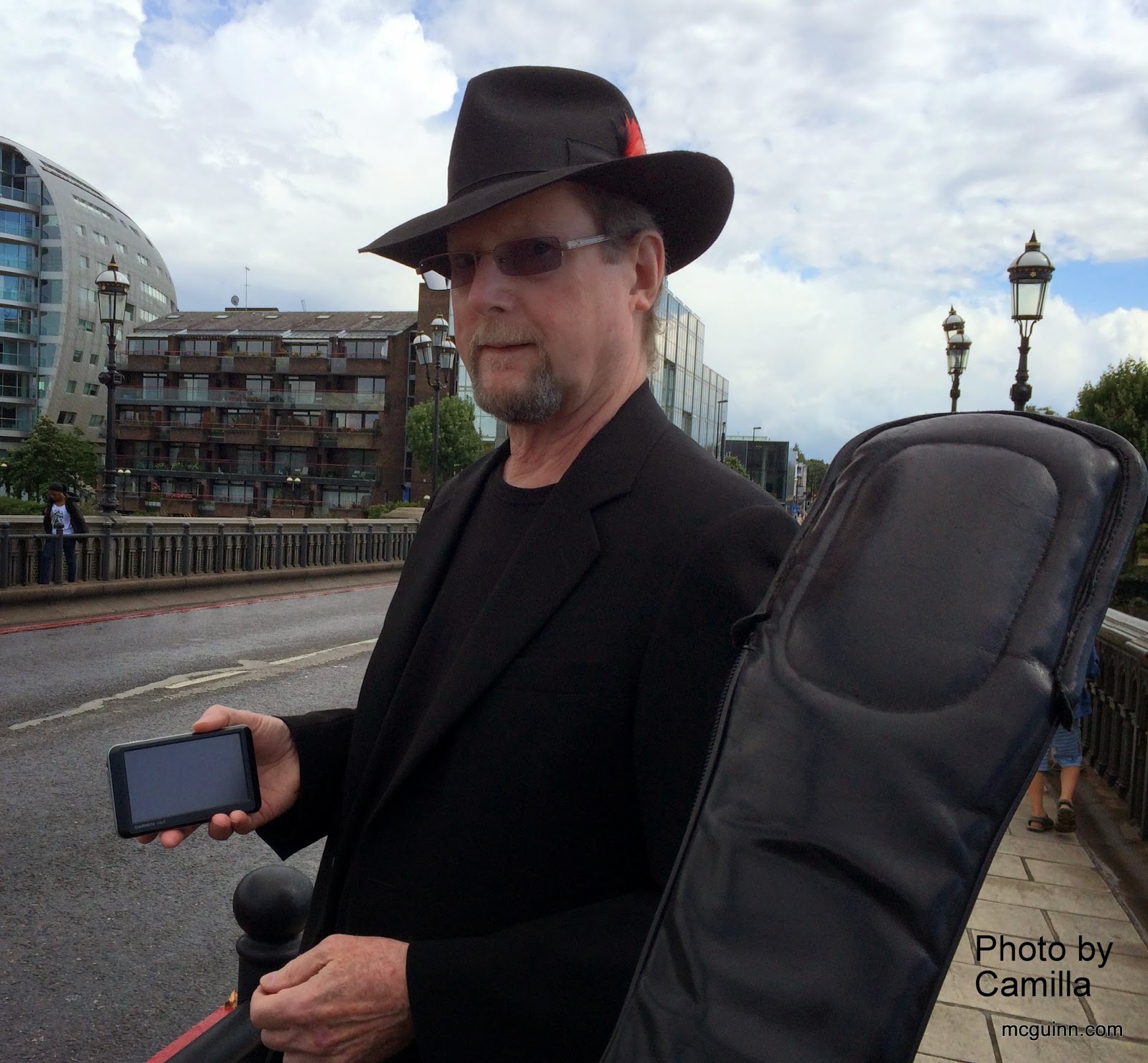 Roger turned on his GPS and realized that our flat was not just over the bridge, it was almost 2 miles away and there wasn't a taxi in sight.

Block by block we made slow progress. Thankfully the morning rain had ceased, but now it was warm. Roger was wearing his hat and suit. And still no taxi in sight. The GPS said we still had 1.2 miles to go.

After another ten minutes of pulling bags over rough streets and sidewalks we reached a residential neighborhood. I spotted a family getting out of a car that looked like a vehicle for hire but didn't have a taxi light. I approached the driver and asked if he was for hire. He initially ignored me. Being desperate, I followed him and began telling him our tale of woe. Finally he turned, slowly looked at me and asked, "Where are you going?" Roger showed him the GPS which now stated we had .8 miles to  go. He sighed, "I will take you."

As we passed block after block, I almost cried. It would have taken us hours to get to where we were going. When we arrived at the flat, I asked the driver, "How much can I pay you?" "Nothing." He helped unload our bags. I didn't have a CD with me because the guests on the Queen Mary 2 had purchased all of them. I offered to put him on the guest list for our London concert at Cadogan Hall. He just smiled  and drove away.

We were home at last! At least our home for the next 12 days, or so I thought.