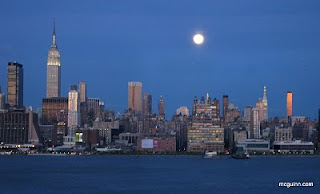 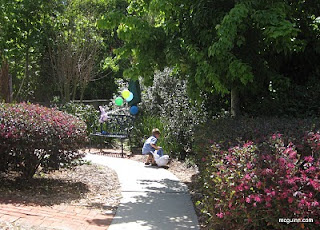 The weather was perfect on Easter morning 2010. While the sun was shining and the birds were chirping I looked out into the garden and noticed that the Easter Bunny had left eggs and balloons scattered under the bushes and flowers. That silly bunny didn’t realize that the only neighborhood kids lived next door. Thankfully, Mia and Bryce came over and picked up all those eggs filled with candy and toys. While they were busy finding baskets full of goodies, the grown-up neighbors were busy munching and catching up on the times we missed with them while we were away. 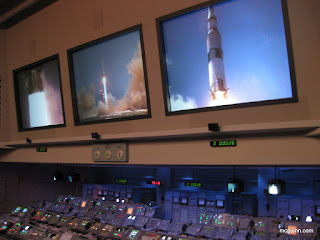 The invitation for The Apollo XIII 40th Anniversary event, scheduled for April 9 arrived to shouts of joy. That mission was NASA’s most “successful failure” and immortalized in the Jim Lovell,Jeffrey Kluger book and the Ron Howard film, Apollo 13. 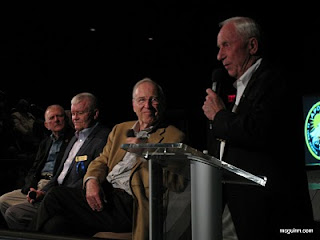 On the night of the anniversary, I laughed and cried as I listened to Jim Lovell, Fred Haise, Gene Kranz (project engineer) and Charlie Duke (the Lunar Module back up pilot who inadvertently exposed the rest of the crew to German measles) re-live the mission. Words cannot convey the sense of awe that we had that evening in the presence of our space heroes.

We had another reason to be on the Space Coast. The Gold Tone Banjo factory had repaired a 'bandolin' for Roger. Gold Tone was founded by Wayne and Robyn Rogers. Our first encounter with their banjo artistry was at the 2009 Folk Alliance conference when Roger was the Keynote Speaker. The banjo was the stringed instrument that landed Roger his first professional job with The Limeliters. When he saw the OT-800 Long Neck Gold Tone, he felt it was time to add another ax to his tool chest. 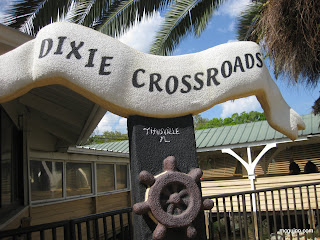 It was lunch time after we toured the craftsman factory, so Wayne and Robyn took us to the famous Dixie Crossroads Seafood Restaurant on Garden Street in Titusville. Wayne had gone to school with the gregarious owner, Laurilee Thompson. The fresh shrimp she served was enhanced by the stories she told us about her days as a shrimp boat captain. As she spun her tales of the sea, I envisioned the movie of her life.

On April 15, we paid our taxes, packed the instruments in the van and set the GPS for the stage of the beautifully restored 1939 Art Deco Theater now called the Don Gibson Theater in Shelby, NC. The theater was named for the local boy who penned the Ray Charles hit,”I Can’t Stop Loving You.”

Washington DC was the second stop of the tour. Roger was invited to join The Rock Bottom Remainders for the first concert of their 2010 “Wordstock Tour.”

The energy these authors exude always amazes us. They are up early doing all they can to promote these charity concerts. They don’t slow down until security knocks on the hospitality suite door in the wee hours of the morning telling them to lower the music and go to bed. They even steal time for sightseeing trips. This tour was no different. The two days in DC were hit with a barrage of radio and television interviews, an evening conversation panel directed by Sam Donaldson, receptions, a rehearsal at XM studios, dinners whenever time permitted but most of all fun!

We woke up one morning for one of those early TV interviews. Listening to Scott Turow and Roger tell stories during the morning DC rush hour was worth the blurry eyes. We arrived in the green room of the FOX-WTTG TV show just as the tag for the interview was playing on the monitor. David Tauler, another guest on the show with the band “House of Echo ,” ran to the TV screen, pointed at the picture of Roger and declared, “Hey! He’s going to be here!” The look on his face was priceless, when Roger walked up to him, smiled and said,”And here he is now.”

We escaped for a quiet lunch to fortify ourselves, and then we met everyone at the NPR studios for a Tiny Desk concert in their offices. It was a good thing Roger remembered to bring his acoustic guitar; he was the only one with an instrument. There had been no rehearsal or even conversation about what was happening, so when Roger walked into the room, there was a quick huddle to come up with a song that was in the public domain or one that had no copyright issues. Fortunately, Roger had recorded “The John B's Sails” aka “Sloop John B” with Dave Barry, Ridley Pearson and Gregg Iles on the Folk Den Project a few year earlier. Everyone remembered the words and the live performance was recorded. Dave Barry gave a wonderful introduction. Let’s hope this link stays up on the NPR site for a long time. 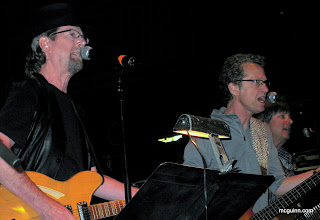 The Rock Bottom Remainders left Washington DC on the rails for Philadelphia; we left on the highways for Rockwell Hall at Buffalo State University in Buffalo, NY where Maria Sebastian opened the concert for Roger.

Two days later, we met up with John Sebastian (no relation to Maria) in Tarrytown, NY at the Tarrytown Music Hall. Roger loves going back to his childhood town but this time was even more special with not only a re-union with John but one with his “Thunderbyrd” producer, Don DeVito.

A week before the next concert, we checked into the Sheraton Lincoln Harbor hotel in Weehawken, NJ. The hotel was the base for radio interviews and meetings. It is so easy to catch the ferry right out of the front door of the hotel to New York City. After several days of business meetings, we enjoyed an engaging dinner with Patrick, Roger’s oldest son. 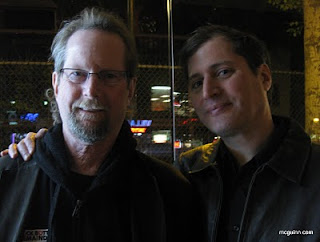 1958 was the year Steve McQueen made his debut performance on the big screen. It was that performance I saw while sitting in the back seat of a 1956 Ford sharing popcorn with my brother at the drive-in theater in Beaufort, SC. It was the first horror movie this 7 year old had ever seen. Steve McQueen’s performance in the “THE BLOB” could not mar the fear I felt for years when I had to sleep in a room with a heater vent on the wall. 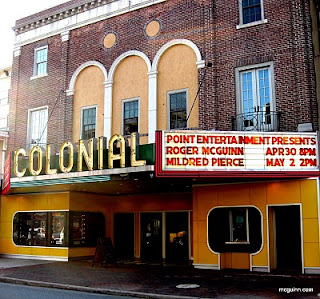 I think the only reason I don’t close the vent now is because it is on the ceiling.


Well, our next concert in Phoenixville, Pa at The Colonial Theater was the very same theater that “The Blob” oozed out of in 1958. I moved my “lemonade stand" close to the door just in case I heard screams coming from the auditorium. Roger thought my disturbed thoughts were so funny, that he told my story to the audience during his show.

Roger and Pete Fornatale, a New York City DJ, became friends many years ago. Every year Roger would go to WNEW for the annual Roger McGuinn update on Pete’s show ‘Mixed Bag.” Pete probably knows more of Roger’s history than I do. His latest book, “Back To The Garden: The Story of Woodstock” is filled with stories of the musicians who were at the 1969 gathering on Yasgur’s farm. Pete also presents a video lecture about those times and that is how he delighted the audience prior to Roger’s concert in Morristown, NJ.

This tour developed a theme of its own...Wordstock, Woodstock and old friends.

On the way to Valparaiso, IN, we stopped to see more friends in Dublin, OH. They always fill us with meals meant for kings and lots of loving memories.

In February 1898, John Phillip Sousa conducted his band through the doors of The Memorial Opera House in Valparaiso, IN. The stage has seen Vaudeville greats, including the Marx Brothers. On May 8, 2010, the stage was gracefully set for Maria Sebastian to open the evening for Roger McGuinn. 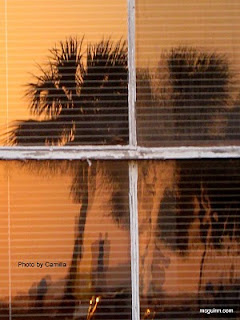 Next Blog: A visit to WSM Radio station, Nashville TN- The past -1968 and the present- 2010:-) I'm on summer vacation, so the next BLOG will be up sooner than normal.I'm not rushing around trying to pack for the next tour. It is great to have time in the summertime!
All photos by Camilla 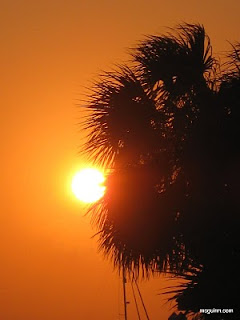