The sun was shining and the cars were speeding as we traveled south on interstate 5 to join The Rock Bottom Remainders in Los Angeles for a fund raiser concert to benefit 826LA, a non-profit organization dedicated to helping students explore their creative writing skills. 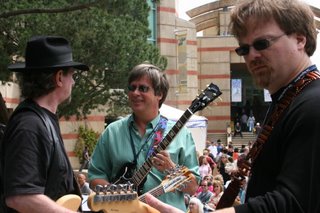 
The members of "The Rock Bottom Remainders” are probably some of the most affluent band members in the world; of course that’s not too hard to do since the majority of musicians live hand to mouth. Their prosperity isn’t because of the group’s guitar techniques, platinum discs, or wonderful voices; it’s their talent for making the public hunger for words that transport their readers to a different dimension, intrigue them with a mystery, give insights into a cultural life style or make a person laugh out loud. These folks are writers. Dave Barry, Ridley Pearson, Mitch Albom, Amy Tan, Greg Iles, Scott Turow and Kathy Goldmark make up the core of the band with Stephen King joining in whenever his schedule allows. Every city stage where the band performs is graced with guest authors who, like all the others, had always wanted to be a rock ‘n’ roll star.

The odyssey of the group began when Kathi Goldmark worked with various authors during their promotional book tours. She began to notice an interesting common thread; there were a lot of writers who played in bands before their careers as authors took hold of their destinies. Kathy played in a band herself and thought that putting these talented people together to live out their musical fantasies would be a lot of fun. 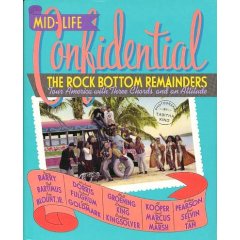 They wrote a book about the early days, so I won’t go into their whole story. The book is called, “Mid-life Confidential: The Rock Bottom Remainders Tour America with Three Chords and an Attitude”


I will tell the story of how Roger became a guest musician with the “Rock Bottom Remainders.”

Early in March 2001, within a week, we received two copies of the same book from different friends. The book was “Sick Puppy” by Carl Hiaasen. We weren’t exactly sure why our friends thought it was important that we have a copy of this book with a strange title, but we trusted them and settled down to explore the pages for a clue as to why we'd received these gifts.

The story takes place in Florida. That was a clue. We have lived in Florida since 1984, so maybe that was why our friends sent the books. But on page 50, I was victorious! I quickly ran into Roger’s office and excitedly demanded, ”Listen to this!”

“The dog settled in at his feet. Twilly patted its glossy rump and said, 'Everything’s going to be all right buddy.' He couldn’t bring himself to address the animal by the name on its tag---Boodle. It was a quaint synonym for bribe, Palmer Stoat at his wittiest.
'From now on,' Twilly said to the dog, 'you’re McGuinn.'
The Lab raised its head, which seemed as wide as an anvil. 'After a great guitar player,' Twilly explained.”

We were both pleasantly bewildered. We still weren’t sure if the author actually meant Roger, so we kept reading. On page 54, we had confirmation, “After a musician I’m fond of, Roger McGuinn.”

We had never met Carl Hiaasen and I’m embarrassed to admit had never read any of his books. It didn’t take long for us to finish this novel about an eccentric environmentalist’s personal capers against the greedy developers who were plundering Florida’s environment.

A few days later, as I was perusing the Orlando Sentinel, I noticed an advertisement for the book “Sick Puppy” which had a notice that the author, Carl Hiassen, would be signing autographs of the book that evening in Winter Park. That’s when I hatched what I thought would be a fun caper of our own.

I suggested to Roger that we go to the bookstore with a copy of the book and ask him to autograph it to “Roger.” Then we would see if Carl would recognize who was asking for the autograph. My enthusiasm was infectious so Roger went along with the plot.

We arrived at the bookstore by 7pm and as we walked into the store my brilliant idea started to look a little less clever. There were about 100 people standing in line for an autograph. The drive to Winter Park had taken over 45 minutes, so we were committed. We took our place in line and waited.

I tried to avoid looking up at Roger because every time I did he had the same look that Ricky Ricardo (Desi Arnez) used to give Lucy (Lucille Ball) whenever she got him involved in a feathered-brained scheme. I could imagined hearing Roger imitating Ricky’s Cuban accent saying, “LU..CY” but with “CA..MILL..A” being the name called to give an explanation.

Well, we were in a bookstore, so I smiled bravely and said I needed to find a book and left Roger stoically standing in line.

As I studied the books on the shelves, I would occasionally look in his direction. All of a sudden, he was talking to a lady and I could tell he was looking around for me. I immediately went to his side.

The lady was from the Orlando Sentinel and she had recognized Roger. Evidently she had actually read the book and wanted to get a picture of Roger and Carl together, but her photographer had to leave for another assignment. She asked if Roger would mind going to the front of the line. I was saved!

She introduced Roger to Carl, so my plot didn’t come off exactly as I had envisioned it, but the signs of a Cuban accent were disappearing from Roger’s countenance. Carl seemed a little embarrassed when he shook Roger’s hand. They talked for a few minutes, but the line was long, so Carl suggested that we get together the next night at a dinner where he was a guest speaker. He did sign our copy of the book before we left,
“For Roger and Camilla - With admiration from a real sick puppy! Carl Hiassen.”

The next evening, we drove to the Disney hotel where Carl was speaking. He had arranged for us to join his publisher’s table for the dinner and after Carl gave his humorous speech, the three of us were able to get away by ourselves. We were like old friends at a reunion. During the conversation Carl told us about “The Rock Bottom Remainders.” Roger loved the concept of the band. Carl said he would call Dave Barry and ask him if Roger could play with the group during one of their concerts.

Well the rest is history. Roger has played with the “Remainders" for over five years now, whenever their schedules connect.

Dave and the members of the group often make disparaging remarks about their musicianship, but actually they're not bad. In fact Roger asked them to record “The John B’s Sails” with him on the Folk Den. They recorded it at the beginning of a 2004 “Remainders” tour.

We were all gathering in St. Louis and the day before the rehearsals were to start, Ridley Pearson invited all who had gotten into town early to have dinner at his home. Roger immediately drafted the dinner guests, Dave, Ridley and Greg Iles, to sing into his laptop computer. They rehearsed the songs a few times, and then Roger turned on his computer. After the song, Dave started talking and Roger informed him, that he was being recorded. Roger left Dave's remarks on the final mix of the recording. 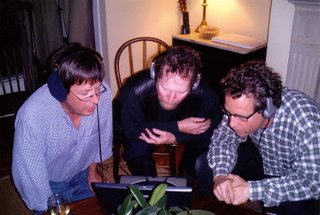 You can hear this recording and Dave’s surprise reaction on THE FOLK DEN. This recording is also on The Folk Den Project. 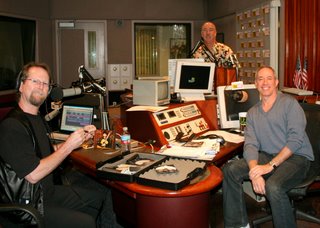 We arrived in Los Angeles, a few days before the Remainders in time for Roger to be a guest on two radio shows. Marc Cohen, KABC Computers and Technology Show, was excited that Roger was recording on computers and asked him to join him and Mark Olleesky for the full Saturday show from 9am-11am. Technology and music – two joys of Roger’s work.

Roger also joined guest “Remainder,” Frank McCourt at the radio station KPCC. Frank had not planned to sing during the interview, but when Roger started playing “Finnegan’s Wake” Frank’s weariness from his airplane ride disappeared and the sounds of a joyous leprechaun sprang from his lips.

A dear friend invited us to stay at his house while we were in Los Angeles. Roger and I had spent many nights there and referred to it as “Camp Beverly Hills,” since we used to camp in our VW Vanagan parked on his driveway. Two other friends were visiting at the same time. The lady, Sonnet, is a singer, and since it was time for the monthly Folk Den song, Roger drafted Sonnet. They talked for awhile about which song to do and she mentioned that her mother used to sing her the old Irish song, “Molly Malone.” Another friend had emailed Roger a month earlier and suggested the same song. All the signs suggested that "Molly Malone" would be the song of the month.


Roger used gaffer’s tape to mount his Samson CL-8 Condenser microphone to an upright lamp stand. He then turned on his computer, plugged in his Rickenbacker and began the recording. After recording the electric and acoustic guitars, he sang the song. Then Sonnet became the voice of Molly Malone singing “Cockles and Muscles, alive alive O!”

It doesn’t matter where a tour ends, the day the last concert is over; we become like horses running back to the stall. And so it was after The Rock Bottom Remainders concert, we arose early in the morning and began the 2523-mile trip from Benedict Canyon, CA to Orlando, FL with a stop in Tucson to hug the “Special Lady." 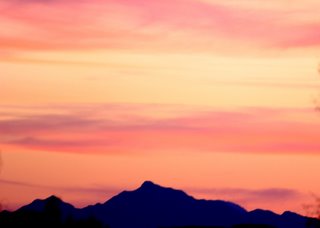 
Next month, I will continue the story of McGuinn and The Chad Mitchell Trio.

email the roadie at roadiereport@folkden.com