Roadie Report 84 by Camilla McGuinn - Oh, What a Leap Year! 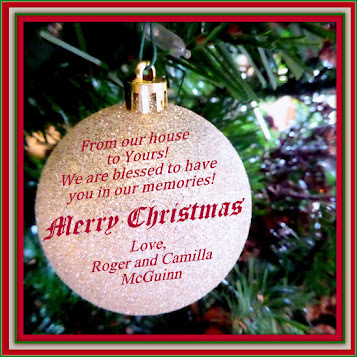 I always said that Roger and I could live on a deserted island. The word is “deserted,” not “desert.” Our deserted island would have food, water and wine. Well we have been on a deserted island since March. That was the last month Roger left the property. Every week or so, I forage for food and pick up the mail. I volunteered to venture out because I’m the youngster in the house.
Our neighbors are having distancing driveway gatherings. I sometimes go and explain, “Roger is old.” I smiled at the reaction I heard the first time I said those words. They all replied, “NO!” and then “How old is he?” I giggled because I knew Roger doesn’t even realize how many years are on his driver’s license. I’m aware of the years on mine because I take advantage of senior days.
When we got married in 1978 on April First, we wondered about the choice of the date. By Divine inspiration, April 1st was the day of our vows. We pondered the date and decided to see which day of the year it was. That day was the 91st day of the year – if it wasn’t a Leap Year. We opened our Bible to Psalm 91 and declared it our wedding present from God, since HE inspired the date. Now the story of our betrothal is a whole separate story someday to be told but for now let’s talk about this year.
This is a Leap Year! And oh what a year! Our economy shut down, so did our concert work. Theaters are shuttered, musicians are just strumming and agents are pulling out their hair trying to reschedule concert dates.

Doing nothing is not in our psyches. We thrive on working. Now, Roger goes to the studio and records a project that has been waiting to do for over 60 years – the songs from “Gene Tryp.” It was a play that Jacques Levy asked Roger to write the music for in 1968. The play never got on Broadway but Roger got some wonderful songs to sing. “Chestnut Mare” being his favorite.

Once recording begins, his studio door is shut from 1- 4pm, Monday-Thursday. Closets and cabinets beckon me to purge them and so does the kitchen. I have finally used the dusty KitchenAid mixer and all of its attachments. Fresh bread and fresh pasta roll out of the machine like it was made for the task. When the song tracks are ready, Roger invites me in to work on the mixing and mastering.

There is truth to the statement “give a busy person the job that needs to be done.” Not being real busy anymore, my office has stacks of mail and papers sitting all around. I just tell myself, “I’m not going anywhere. I’ll think about that tomorrow. Time to make pasta.”

Two weeks ago, Roger took a break to think about the song for the December “Folk Den,” the online project he has recorded monthly on mcguinn.com for over 25 years. December is the month for a Christmas song. The two 4 CD sets of “The Folk Den Project” were on his desk. He picked them up and listened to all the December songs. It was the Christmas recording he always wanted to do. We tried it years ago, but didn’t feel right about it, but this time we were both amazed at the joy we felt as we were listening.

Technology has come a long way in 25 years. Some of the songs were just two tracks recorded on DAT. Realizing that if we digitally re-mastered the recordings the quality of the mixes would improve. It took two days to master the 13 songs we picked. Then it was easy to put the art work together from photos I had been taking for years to feature on a Christmas CD.

Our intent was to make it for our neighbors and send it to our friends as a Christmas card. I called Oasis Manufacturing to get a quote and realized if we wanted it to be professionally pressed we needed 300 copies. We were happy with the songs, maybe someone else will be also. The process of a simple Christmas card became a little more complicated. CDBABY was contacted, the final product was approved and we are waiting with Christmas anticipation for the gift we have to give.

“Merry Christmas” has an official release date of December 1st. It will be available for download and streaming. The physical CD will be primarily listed on Amazon. CDBABY takes care of distribution to all outlets.

We wanted our family and friends to be surprised when they opened their mail. Roger was a little concerned that I was telling the story too soon. I laughed, “No one reads my blog except 13 dear ones. Especially since I haven’t written in a year!”

This is a very unusual year and a year that we will all be happy to leap over! In the meantime, the Christmas lights are up, the music is playing and we are grateful for the inexpressible Gift of this Joyous Season.

MERRY CHRISTMAS TO ALL

AND MAY WE ALL LEAP

JOYFULLY INTO THE NEW YEAR! 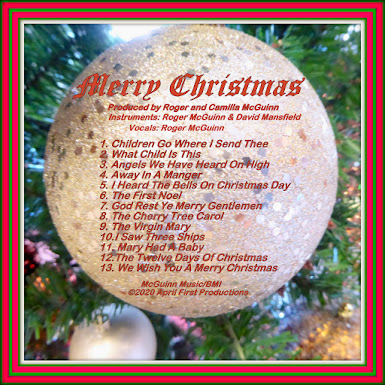