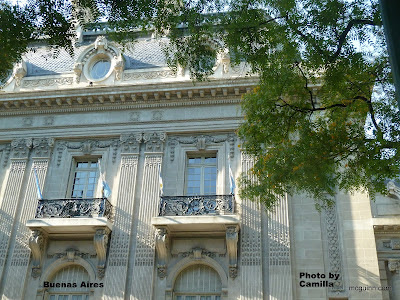 December 7th is a memorial day in our country’s history. In 2011, that date stamped in our passports will remind us of a wonderful trip to Argentina. 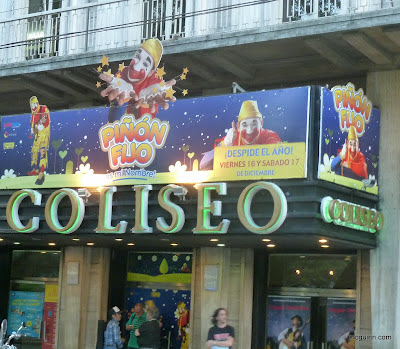 The song, “Don’t Cry for Me Argentina,” whistled through my mind during the airplane boarding process for the nine hour flight to Buenos Aires. A scheduled concert at the Coliseo Theater in “The Paris of South America” was bringing us to our next adventure. 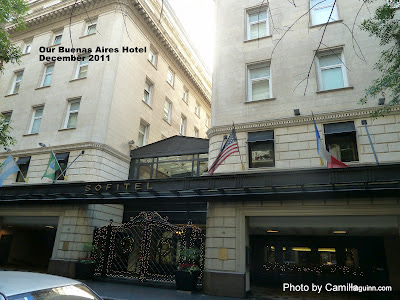 Fernando and Jorge guided us from the airport terminal to the cars waiting for us in the bright South American summer morning. My sleepy eyes were drinking in the scenery during the drive into Buenos Aires to The Sofitel hotel. The palatial architecture gracing the wide boulevards reflects a strong European influence. The city streets are like so many we navigate throughout various continents. The amazing similarity of our world’s cities is very evident in city traffic.

Our early arrival, a week before the concert, provided the opportunity for Roger to talk to reporters, visit radio studios and perform on local TV shows. It was exciting to be living in this vibrant city for a week.

Fernando and Jorge wanted us to experience the excitement of their city. We ate at gourmet restaurants, visited the amazing Opera House and listened to a famous Tango singer. We always thought “Tango” was just a dance, but the lyrics are as passionate as the dance.

Saturday, December 10th, Christina Fernandez, the first female elected president for two terms, was being inaugurated. Friday night, I told Fernando and Jorge that I have never been in Washington DC for an inauguration. I didn’t want to miss this opportunity to take part in their inaugural festivities with the people on the streets. They looked alarmed. I noticed their dismay. I quickly told them, “Oh its okay. You don’t have to take us. We’ll just catch a bus.” They quickly told us what time they would pick us up for the inauguration 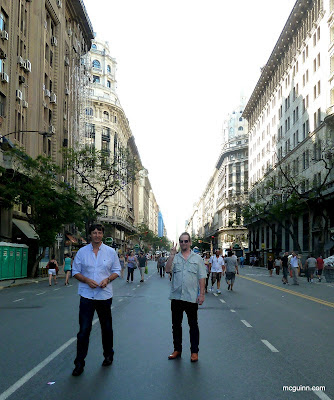 Inauguration morning, they didn’t want to drive to the “pink palace” because they were sure the streets would be packed with celebrating folks, but a common occurrence kept the streets almost empty…the bus drivers went on strike. Traffic in Buenos Aires can be backed up for hours when the many “worker strikes” take place. That was the biggest complaint we heard about this beautiful city.

We walked the near empty streets, listened to the bands playing but never saw Christina come out to the porch where the beautiful Eva Peron stood wooing the masses.. 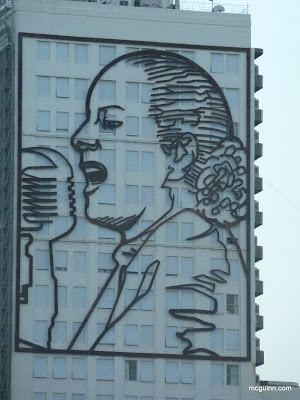 The heat of the day moved us to the famous Café Tortoni for a refreshing respite with a very entertaining waiter. 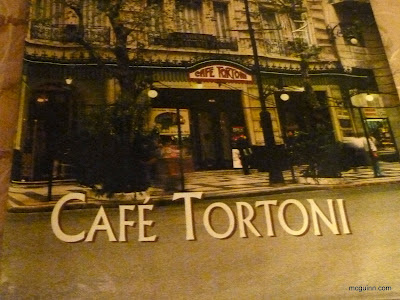 On Sunday, we enjoyed a family cook out at Fernando’s house. Charlie Garcia, an Argentine rock pioneer, joined Roger serenading the guests in an impromptu sing along. Roger asked Charlie to join him on the Colisieo stage to perform songs from “The Sweetheart of the Rodeo.” 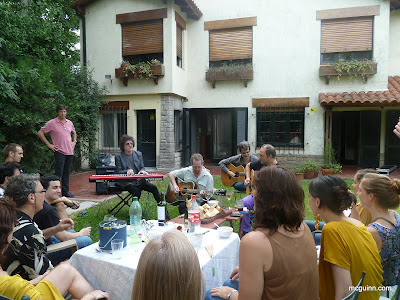 The Colisieo theater is beautiful. The audience was overwhelming and joyful. “The Paris of South America” is vibrant with art, music, dance and wonderful food. Parting a lovely city and new friends is always a sweet sorrow. While waiting to board the plane to take us home, a lady approached Roger and thanked him for the wonderful concert. She and her husband detoured to Buenos Aires when they heard Roger was performing. Music does make the world smaller. 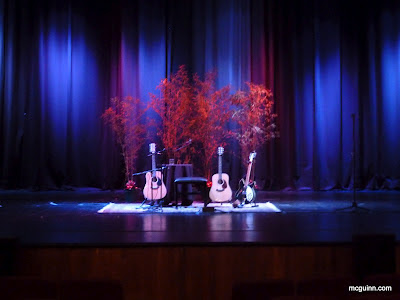 The airplane touched down in Miami on December 15th. Driving back to Orlando, we reminisced about the fullness of our South American experience and made plans for our next adventure. Friday was the only day for unpacking and packing before boarding Amtrak’s Silver Meteor bound for New York City. 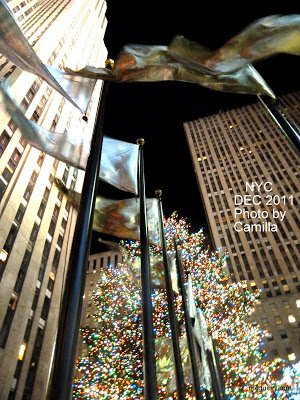 Winter suddenly blanketed New York by the time the train pulled into Penn Station. Patrick, Roger’s son, arrived at our hotel for an early dinner. I wanted to join the festive Christmas shopping crowds, but the next destination, a Caribbean voyage, didn’t prepare Roger for winter weather. Patrick became my “Knight in Shining Armor.” He maneuvered me through the brightly lit crowded sidewalks. We saw a couple become engaged on the cold ice rink of Lincoln Center, smelled the roasting chestnuts, stared into all the store windows filled with Christmas decorations and froze our noses off. I couldn’t wait to feel the warm breezes swirling around the islands. 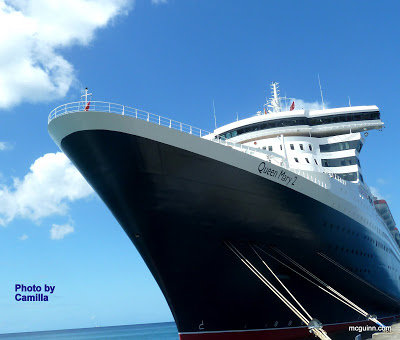 Celebrating Christmas and New Year’s Eve on the aqua Caribbean waters was too good an offer to refuse. Tim booked Roger for two lectures and one Q&A for the 2011 Holiday Voyage on board Cunard’s regal Queen Mary. 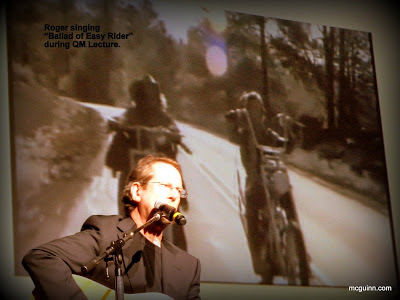 The itinerary included St. Thomas, the home of "Creeque Alley." In 1963, John and Michele Phillips were fellow residents with Jim (Roger) McGuinn in the musician’s hotel in Greenwich Village, The Earl Hotel. Jim had met the duo years earlier in San Francisco. John was singing with the “Journeymen” while Jim was working with the “Chad Mitchell Trio.”

Jim would often go down to their suite to share songs, food and other forms of entertainment prevalent in the sixties. John and Michele were not impressed with Jim’s renditions of “folk music with a Beatle beat.” They were “folk purists.” History proves they changed their minds.

While penning the song “Creeque Alley,” John mentions two friends who had number one songs on the music charts. “McGuinn and McGuire just a-getting’ higher in LA, You know where that’s at.” Jim McGuinn was soaring with the BYRDS and Barry McGuire was singing “Eve of Destruction.” 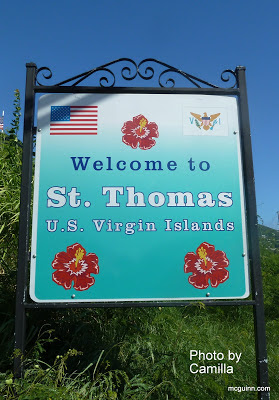 The Queen Mary docked in St Thomas. We walked the few miles into town to search for the infamous alley where the Mamas and Papas formed their sound. It wasn’t an easy find. The town had changed. We walked in circles, asked local folks and no one knew the answer to our questions. All of a sudden, we found ourselves in a small alley. We felt we were close to our destination. Suddenly, our eyes spotted a historical plaque on the wall. 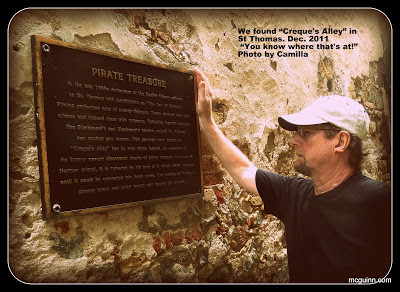 It confirmed our suspicion! The alley had changed names, but we were in the right place. We found Creque’s Alley! 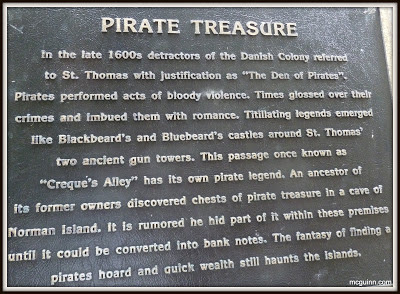 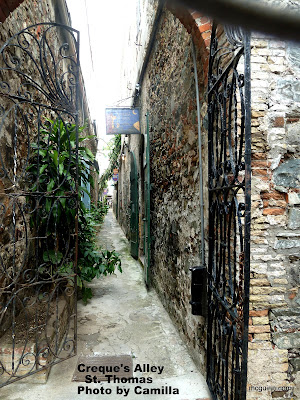 The spelling of "Creeque Alley" is different on the historical plaque than the way John spelled the name. Maybe someone had fuzzy vision or a short memory? No telling who spelled it correctly. Anyone out there in St. Thomas in the 60s who might remember how the alley was spelled then?