South of Norfolk, VA, we had to leave the peacefulness of Highway 17 and join the hustle on I-64 to the Chesapeake Bay Bridge-Tunnel. The almost twenty mile Bridge-Tunnel provides a direct link between Southeastern Virginia and the Delmarva Peninsula. It was opened in 1964. My family vacationed in Virginia Beach in 1967 and one of our adventures was to drive across the bridge since it was named one of the “Seven Engineering Wonders of the Modern World.” I don’t remember the price of the toll then, but now it is $12. That does include a coupon for a free soft drink at Sea Gull Island, which is located on the southernmost of the Bridge-Tunnel's four manmade islands. All that view and a soda too!

After crossing the bridge, we drove on Highway 13 past the Chincoteague exit. There was a bit of struggle not to turn toward there because Chincoteague Island is one of our favorite stops. The town reminds us of why we moved to Morro Bay, CA on July 28, 1980 - one main road, fishing boats and an old fashion movie theatre. But we were on a quest to catch the last ferry to Cape May and had to keep going. 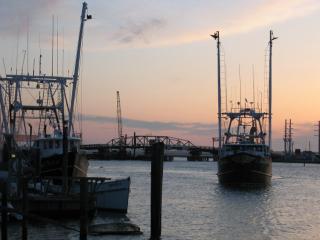 About 90 minutes before the last Cape May- Lewes ferry was to depart, we entered the ferry tollgate, paid the $33 toll and parked our van in line six. It was 6pm and we decided to have a “fun meal” in the terminal before the ferry loaded its passengers. What we call a “fun meal” is one that we would never eat unless we had no choice - hotdogs were the fun food for the evening. We carried our tray to the upper level away for the joyous screams of the children and found a quiet bench on which to munch our mustard-laden treats.

It was almost twilight when we drove onto the ferry. There was a lot of activity on the car deck - the barking sound of the crew directing the positions of vehicles, car doors slamming and people walking rapidly to the upper decks. We decided to ride the 80-minute mini-cruise across the mouth of Delaware Bay on the same deck where the van was secured. The wind was blowing with the ferry and as we stood on the bow watching the dolphins on the port side, my hair didn’t even whip across my face. The sky was overcast, the sunset was a muted gray. Roger started singing a song quietly as he looked at the distant shore of Cape May. The last time we had been on this ferry was in December, 2001. The song was a Christmas folk song and when he finished, he smiled at me and told me that he had forgotten about the song. The quiet beauty of the voyage on board this ferry longer than a football field, inspired the return of a tune learned at the Old Town School of Folk Music in the late 1950s. Roger now knows the December song he will sing for the FOLK DEN.

We drove off the ferry into the dark night. We had spent time in the town of Cape May during the December 2001 trip on our way to New York City where Roger was invited to be a guest on the David Letterman Show. It was on that tour that Roger found his hat in a small shop in Cape May and wore it for the first time ever on Letterman’s show. Since we had already enjoyed the town, we felt a need to get as close to Maine as possible before the holiday weekend started. We opted to get on the Garden State Parkway and let Nancy, the GPS, find a hotel room for us. We stayed in Absecom, NJ.

On Wednesday, June 29th, Roger had a telephone interview with a radio station in Portland, ME. As soon as he finished, we returned to the Garden State Parkway and took it to I-87 in NY. We crossed the Tappan Zee Bridge just in time for lunch in Tarrytown. Roger had lived in Tarrytown for a few of his elementary school years. His younger brother, Brian, was born there on May 16, 1950.

Tarrytown hasn’t changed much since then, except for the amount of traffic. It does have wonderful restaurants and even a castle where we spent the Christmas of 2001.

The rain started pouring down just as we finished our delicious meal at the small Italian restaurant, Lago di Como, 27 Main Street. It was around 2pm, the restaurant was empty except for us and an elderly Italian couple who spoke softly to each other in their native language. Our window table was such a romantic setting, that we didn’t want to leave, plus we didn’t relish getting soaked, so we ordered a cappuccino and made romantic plans to travel around the world again. I haven’t been to Rome. Roger has. He’s going to take me there someday.

We reluctantly left our cozy, dreamy table and ran to our van. The weather made us decide to seek a local hotel room for the night. It was a very good idea. The heavens opened and the area received 2 inches of rain before 5pm. The lightening was so intense, that just as we were moving our equipment to the hotel elevator, all the fire alarms started clanging and the elevator stopped. The fire department came, reset the alarms and we found our room 45 minutes after checking in.

The next morning the sky was clear and we headed north on Highway 9. Our plan was to go up to Albany and catch I-90 east, but I enjoyed the scenery so much, that I missed a turn and ended up on the Bear Mountain State Parkway. It was time to plug in Nancy, the GPS. We were directed to the quickest route to Maine. At Haverhill, MA, we pulled in for the night just to avoid the rush hour traffic on the raining I-495. It was time for a hotel room picnic.

On Friday, July 1st, we arrived at the historical Beachmere Inn, Ogunquit, Maine. A photo I took from our room is on the first installment of the Roadie Report.