We checked into the hotel and met Frank, a retired secret service agent who had volunteered to be our security guard for the concert. He was a friend of the promoter and also worked for the hotel. I found his answer to my question about his favorite presidents, very interesting.

The hotel owner suggested we have lunch at one of the restaurants in Perkins Cove. Her directions to the cove took us on a pathway that skirts the Maine coastline. The restaurants were just opening when we finished our short hike and we were ready for some Maine lobster.

Roger was scheduled to be the guest on the evening WCSH TV show 207. Reg, the concert promoter, drove us through the drizzly rain to the TV station in downtown Portland. The hosts that night, Rob Caldwell and Pat Callaghan were big fans, so the thirty minute show was a lot of fun for Roger. In between the questions about his musical history, Roger played three songs on his Martin HD-7-RM- “My Backpages” (YOUNGER THAN YESTERDAY), “The Trees Are All Gone” (BACK FROM RIO) and “ St. James Infirmary Blues” (LIMITED EDITION).

We woke up Saturday morning and opened the windows to the first rays of sunshine that we had seen in days. The crowds were gathering on the beaches and in the coves. The July 4th weekend was off to a good start.

Our permanent schedule on the day of a show is very structured. We eat lunch around 2pm while we discuss the songs for the concert. This meal will be the last one we eat until we return to the hotel after the performance, hopefully before midnight.

Since the sun was shining, we decided to walk through the town of Ogunquit back to Perkin’s Cove and to Barnacle Billy’s restaurant. We later heard a story that this particular restaurant was known to be a place where a former president docks his boat and grabs a bite to eat. It wasn’t a day for a presidential visit, in fact at 2pm; we were the only people in our section of the restaurant. I couldn’t resist ordering just one more lobster dish while we planned the evenings concert.

Reg picked us up early for the sound check because of the holiday traffic.

Once the sound system and the lighting cues are checked and rehearsed, Roger goes to his dressing room to think about the show and to sign a box of CDs which I sell at what he calls my “lemonade stand.” I was never interested in selling merchandise, I was already wearing enough hats, but when we produced “Limited Edition,” Roger figured out a way to get me out of the dressing room. I’m the one who usually gets stage fright and sometimes my nervousness can be contagious.

I do enjoy selling the CDs because it gives me an opportunity to talk to the people who come to the concerts. They tell me about the last time they saw Roger in concert and I hear some wonderful stories. This night in Wells, Maine the “lemonade stand’ opened the door to a very touching moment. A couple introduced themselves to me after they realized I was “the wife.” He told me the tragic story of the death of his wife about five years earlier. During that time he was devastated. One day he played BACK FROM RIO and was intrigued by the song “Without Your Love.” The words were so close to the pain he was feeling and he wanted to know what we meant by the phrase “This mercy so severe.” So he emailed us. 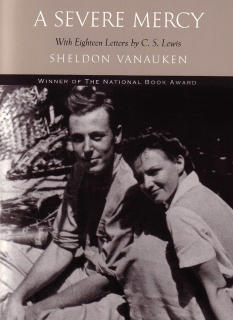 We told him, the book “SEVERE MERCY” by Sheldon Vanuken was the inspiration for the song. He obtained a copy and was also touched by the story. Reading the book not only helped him through his grief, it also introduced him to C.S. Lewis, who was a friend of Sheldon Vanuken.

That night, I felt like an old friend had stopped by to talk and when I asked if the lady who was with him was someone special, he gave me a big smile and said, “ yes…everything is better now.”

I love my lemonade stand!