Forgetting the bag in the hotel made it necessary for us to do some shopping for essentials. In Columbia, Missouri we found a Holiday Inn that was located at one of those American institutions - the shopping mall. The hotel and mall were just the ticket for our nightly needs. We quickly found replacements for most of the left behind items, returned to our room and happily ordered room service. The meal was surprisingly good.

We had crossed a time change border so we were awake early and decided to enjoy breakfast. The dining room was quiet with just a few early morning travelers and we were sure that we wouldn’t be there long. After a considerable amount of time, I started glancing hopefully at the kitchen door. Yep, it was one of those days where they had to go find the chickens. Starting the day on an impatient note is never a good idea, so I suggested to Roger that we share some good road memories about Holiday Inns since we were sitting in one.

I recalled when I took my first cross-country trip by car in 1970 in my 1968 yellow Mustang. My mother insisted we stay at Holiday Inns, just like the mother in the movie “Blast from The Past.”

Roger remembered the early days of touring with the BYRDS in a Clark Cortez motor home. After a long day of driving, the Holiday Inn sign would come over the horizon and the band would start singing, “Cheeseburger, wider than a mile”…to the tune of “Moon River.” That group of traveling musicians called Holiday Inns “plastic mommy.”

By the time the food arrived our memories had calmed us down and we enjoyed another surprisingly good meal at the Holiday Inn.

Interstate 90 is an interesting stretch of highway. We connected with it in Sioux Falls. There are long stretches with nothing but fields of sunflowers and billboards. Reading the billboards became a source of entertainment. We started noticing two enticements. One for the “Corn Palace’ in Mitchell, South Dakota and the other for “Wall Drug” somewhere up the road. The “Wall Drug” signs didn’t tell us where it was, but the signs had some interesting claims. According to one billboard, the store had had been featured on “Good Morning America” 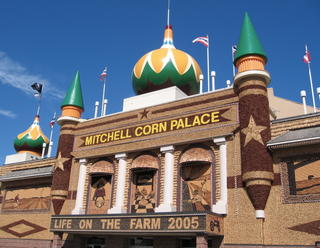 We arrived at the exit for Mitchell, South Dakota at 4:30pm. It was time to stop and besides it was the home of the “Corn Palace.” Before checking into a hotel, we made the pilgrimage to the palace. I didn’t know what to expect, having not done a history search on google, but I found myself staring at the craftsmanship of the façade with a sense of wonder. Every year, the outside of the Corn Palace is decorated with thousands of bushels of corn, oats, grain, and wheat in the form of murals depicting various aspects of South Dakota life. The detail is amazing and I thought it would be really interesting to actually see the people gluing the bushels of harvest to the wall. The palace is the focal point of Mitchell but there is also a very good restaurant called “Chef Louie's Steak House.” 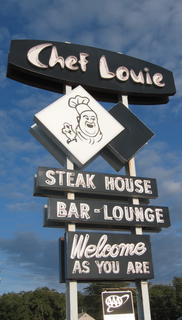 We left Mitchell after a good meal, a good night’s sleep and some local enrichment. I know that sounds ‘corny’ but I couldn’t resist. Now the glory of the South Dakota sunflower fields and the “Wall Drug” signs filled our morning view. We started getting suspicious about “Wall Drug.” When we first saw the signs, they looked tasteful. We imagined an old fashion drug store like Ashworth Drugs in Cary, NC where I used to stop for a cherry coke on my way home after school when I was eight years old. Ashworth Drug Store is still in Cary and we always stop there when we pass through to eat at their lunch counter so I can reminisce about the early 60s in a small town in America. Cary is no longer a small town, but the drugstore still has same wonderful chilidogs with coleslaw.

The “Wall Drug” billboards finally told us where it was located - Wall, South Dakota. It didn’t occur to me that Wall Drug was named for a town. The signs even started telling us how many miles we had to go before the trumpeted exit. We figured “Wall Drug” on Interstate 90 is the equivalent of “South of The Border’ on Interstate 95. Even though we have never stopped at “South of the Border,” by the time we reached Wall, we had to stop. One of the billboards announced that “Wall Drug” had western wear and boots. That was the incentive we needed to brave the Disneyland of I-90. 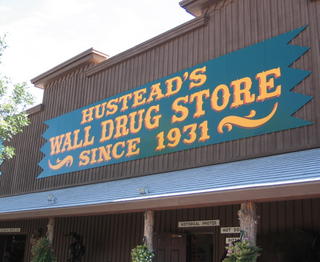 Wall Drug is the industry in Wall. It began its fame and fortune by offering free ice water to weary travelers in 1935. During our brief stop there, we bought Roger the prettiest boots I’ve ever seen but we didn’t drink the free water.