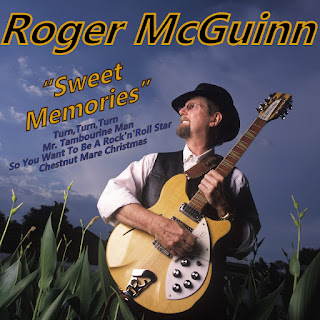 After 40 years, thinking of a special birthday gift for the man I have so much fun living with is not easy, but I do know him. One of his favorite things to do is to pack the van and drive the back roads of the USA. So, for his 76th birthday, I arranged for us to hit the road and even better, release  his newest CD, "Sweet Memories." Here are the stories behind the songs:

“Sweet Memories” is the first rock-studio CD that Roger McGuinn has recorded since 2004. It is the album fans have been asking for at Roger’s concerts. They are continually asking for studio versions of the BYRDS songs.  So Roger re-recorded three BYRDS' hits from scratch and they were so authentically performed that everyone asks, “Did he use samples?” The answer is no! He played every instrument and sang every vocal including harmonies on “Turn, Turn, Turn,” “Mr. Tambourine Man” and “ So You Want To Be a Rock ‘n’ Roll Star.” There are also nine other songs never recorded before.­­

“Sweet Memories” is a trip down memory lane for Roger McGuinn. It all begins when you open the package and see a letter he wrote to his family in 1965 on the back of a publicity photo of his new group, the BYRDS. He explained to his parents that their first song was written by Bob Dylan of Peter, Paul and Mary fame. The publicity photo Roger wrote on the back of is included in the collage of photos from Roger’s past on the opposite panel of the CD package. Get out your magnifying glass and see if you can identify the friends from a span of 60 years.

There are 8 other songs that Roger and Camilla have written over the years. This CD seemed the perfect time to record them.

"Chestnut Mare Christmas" - A continuation of the "Chestnut Mare" story. They were reluctant to write a sequel to that classic but the story continues with a tender message and Marty Stuart playing a galloping guitar!

“Grapes of Wrath”- The inspiration for this song is the black and white 1940 Henry Fonda movie which the McGuinn’s enjoy watching on a rainy day.

Sweet Memories”- Was written in the early 1980s in Morro Bay, California. The late New York DJ, Pete Fornatale, always encouraged Roger record it. The song was a favorite of Pete’s. To the McGuinns it wasn’t finished yet. There were still the European trips to write about and the wonderful train rides. Unfortunately, Pete passed on before it was recorded. When thinking about the title for this CD, that song seemed so appropriate because of all the memories on this disc.

“Catching Rainbows” took years to write and just as long to record. It didn’t fall into place until the beginning of this CD. It too is a song about the McGuinn's adventures. The rainbow photo on the back cover of the CD with the song list was taken by Camilla on an ocean voyage.

It was “5:18” in the afternoon when the McGuinns were sitting on their garden porch in Morro Bay, watching a storm rolling onto the California coast. At that time, they never dreamed of leaving California, but they did move a few years later.
“The Tears” was written by Camilla on an airplane returning home to California after a long tour. She was thinking about Edgar Allen Poe’s poem, “The Bells.” With a hotel scratch pad and pen, words were scribbled about all the tears many have shed in the privacy of a closet.

Roger loves being on the ocean. “At The Edge of The Water” was written by him during the morning dawn while sitting on a ship’s balcony with his guitar.

“Light Up The Darkness” was written in the McGuinn’s small rented condo in Century City within a year of their marriage. It was the beginning of a long beautiful relationship in life and work.

“Friday” - Roger recorded the song “Friday” because he and Camilla laughed so hard watching the spoof  video on youtube they couldn’t stay in their chairs. https://www.youtube.com/watch?v=q4KwBklNuSE   They even had to research the song to make sure it wasn’t written by Bob Dylan. Roger emailed the creator of the video, Nate Herman, and told him how much enjoyed his work and was thinking of recording the song himself. Nate replied, “Life imitating art imitating life.”

Roger's CDs can be purchased from https://store.cdbaby.com/Artist/RogerMcGuinn
or if you're more comfortable with Amazon:
https://www.amazon.com/s/ref=nb_sb_noss?url=search-alias%3Daps&field-keywords=Roger+mcGuinn+%22Sweet+Memories%22

We're relaxing in Flagstaff, AZ as I write this BLOG. The van tires are rolling on the way to California to join Chris Hillman, Marty Stuart and The Fabulous Superlatives for the Celebration of the 50th Anniversary of the "Sweetheart of the Rodeo."

Our day was spent exploring the "Petrified Forest." Oh what a day! 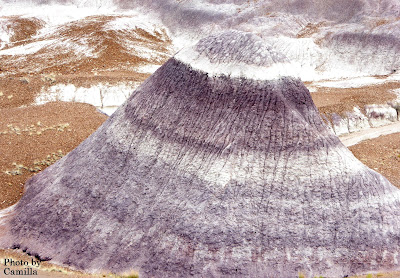 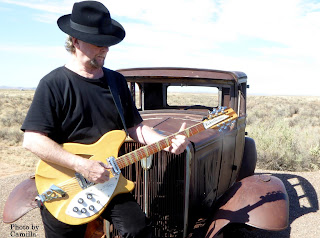 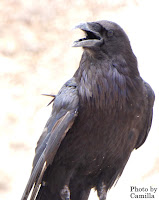