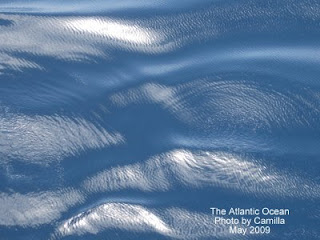 Photo shot from our balcony on the Crystal Serenity

When God drops a dream in your heart and it comes to fruition, mere words sometimes can’t describe the experience. But it is this attempt at writing these words that will enable us to someday look back and smile at the sweet memories.

Our walk was rapid to catch the train to Edinburgh. The lounge had free Wi-Fi and I found myself totally involved in business emails without keeping an eye on the clock. There weren’t many people in the First Class Coach because the cost of the train ticket is expensive unless you have a BritRail Pass. The pass is used to promote tourism in the United Kingdom, so the price is very reasonable when bought in the United States before landing in England. It is wise to pay the extra for First Class because the Coach compartments are usually filled with commuters going to work who probably would appreciate not being inconvenienced by tourist and their luggage. Check the BritRail website for the prices.

I listened to Roger’s voice while he did a telephone interview before we left the hotel in Birmingham. He told the interviewer that we have been touring the UK for years with a BritRail pass. Those years of experience have fine tuned our choices of trains and hotels. This tour was quickly becoming one of our favorites. The dream didn’t begin on this train; it began last year when we entertained a dream of touring across the ocean without using wings.

The rental car from Orlando to Miami was comfortable, but not as comfortable as our van. Our understanding was enlightened as to why people are often amazed when we tell them enjoy driving. Riding in a regular car for hours is a confined way to travel.

The streets of South Beach were filled with people attending a “Rap” convention. The traffic inched its way to our hotel. One night there, then Crystal Cruise Line sent a car to drive us to the Crystal Serenity.

Embarkation for us was around 3pm. A previous experience on a different cruise line made us dread the “move the cattle attitude.” Boarding the Crystal Serenity was like boarding a private yacht. There were no lines and the staff made us feel like royalty. 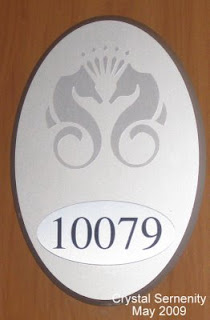 The butler for our stateroom, Engin from Turkey, finished the royal treatment for the next ten days.

The Serenity inched away from the dock in the late evening. On the top deck, a few couples gathered to watch the Miami lights fade in the moonlight. The voice of Louis Armstrong filled the air singing, “Its A Wonderful World,” a Crystal Cruise line custom when one of their ocean liners departs a shore. Roger smiled, put his arm around me, took my hand and we slow danced our way into our dream adventure.

The crossing from Miami to Lisbon was going to take ten days. I wondered how we were going to spend the time. It didn’t take long to realize that the activities arranged by the Crystal staff could fill every moment of every day.

Since Portugal was our destination, I signed up for a Portuguese class. It was in that class that I met people who were to become our first friends on board.

Roger spent the first couple of days on the balcony of our cabin fishing the satellites for the Leo Leporte show, “The Tech Guy,” on XM Radio CH 158. He was thrilled that he managed to receive the show a little beyond Bermuda. After we were out of the connection line with the magic stars, Roger recorded two songs for the Folk Den on the Pro Tools equipment that he insisted on bringing. The cabin was as quiet as a recording studio.

Bermuda was the only stop before Lisbon. On my 40th birthday we had used our frequent flyer points to explore the island, so we decided to stay on board while everyone else went ashore. While sitting aft of the deserted ship, with a bottle of champagne, a lone couple walked by. We laughingly asked if they were enjoying our private yacht. Linda and Manuel quickly engaged us in a vivacious conversation. They had been to Lisbon before and when we told them that Roger is a musician, they insisted we join then for an excursion to a Fado club in Lisbon to hear the beauty of Portuguese folk music. 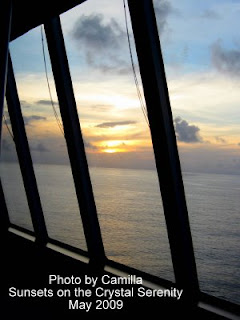 The theme of the cruise was “The Big Band.” One of our favorite movies is “The Glenn Miller Story” starring Jimmy Stewart. The band hired for this cruise was “The Glenn Miller Orchestra.” It was exciting to hear a big band play the songs of the sound track to our much loved movie. Every evening we would go to the Sunset Lounge, watch the sunset and listen to the music.

A few years ago, Roger and I made a deal with each other. I didn’t have to ride a bicycle anymore and he didn’t have to dance. He had already graciously forgotten the deal on our first night at sea. When the distinct sounds of Glenn Miller flowed from our new friends who played in the orchestra, we dressed in our finest attire and waltzed across the Atlantic Ocean. 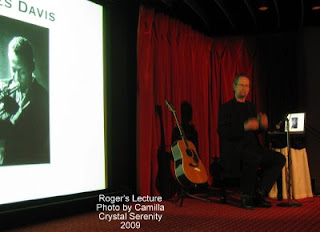 It was easy for Roger to give two lectures because he has been lecturing in Colleges and High Schools. It was an intimate crossing, as re-positioning cruises often are, so the audience was filled with appreciative new found friends. 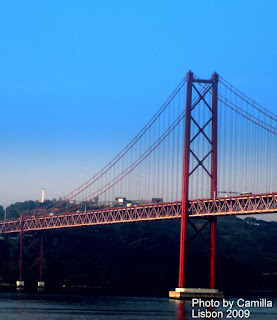 The San Francisco of Portugal.

Disembarking from the Crystal Serenity was as easy as embarking. Engin walked us to the waiting car. It was a sad farewell, but Rick, the cruise director, insisted we would be back. I’m pouring over the Crystal website and dreaming of the next time.

Our hotel room wasn’t ready when we arrived because it was before noon. The free Wi-Fi in the lobby became our first contact point with our email in 10 days. Roger looked up after a few minutes and began laughing, “I feel like I have jet-lag. It is a sense-memory of always arriving on foreign soil after a long airplane ride and wanting to go to bed.”

The room was soon ready, but we didn’t go to bed. The blooming Jacaranda lined streets of Lisbon opened up to us our first adventure in Portugal as we walked the cobbled sidewalks. 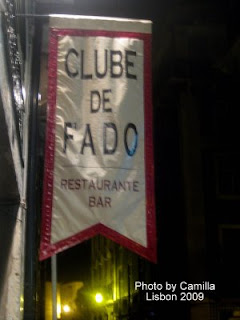 In the evening, Linda and Manuel arrived at our hotel to take us to the Fado Club. After a glass of champagne, we hailed a taxi for the old part of town.

Manuel made reservations at a club that presented the renowned guitar player,Mario Pacheco. Our table was right in front of the performers. The first of the many food courses was finished when the lights went red and all the noise and eating stopped. Out walked 4 performers, 3 male instrumentalists and one female singer. Mario played a 12-string guitar, but it wasn’t like Roger’s. It was a Portuguese 12-string with six sets of two strings resembling a large mandolin. There was no amplification of the instruments, nor of the singer’s voices. The room filled with the soulful sounds of a nation’s heritage. The words were foreign to us but we were moved by the intense emotion.

Our stay in the beautiful city of Lisbon was too short, but Roger had a concert to perform in Madrid. The evening after the amazing Club Fado experience, we boarded an overnight train to the capital of Spain. A late night dinner was served on board then we settled in our compartment for a night of dreaming on the rails. 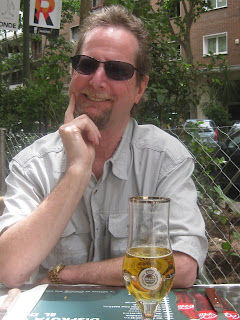 We had worked with the promoter in Spain in 2004 for the Azkena Rock Festival in Vitoria-Gasteiz, so we knew we were in kind, capable hands.

The Hotel Ac Aitana became our home for two nights. It is located in the business district, away from the tourist area. The tapas bar across the street is the munching place for all the locals and it became ours too. We did experience the historical part of town, because the venue was situated right in the middle of it. The warmth of the Spanish audience stayed with us on our beautiful train ride north to Paris. The Spanish countryside looks like Southern California. No wonder the Spanish settled there. 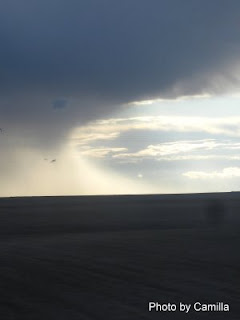 Photo of the rain on the Spanish Plains taken from the train.

It was Sunday morning when our train pulled into the Austerlitz Station in Paris. We joined the taxi line and it soon became apparent that taxis did not make a habit of stopping at this station on Sundays. Thirty minutes later, I decided to walk around the block to see if there was a better vantage point. As soon as I turned the corner, I saw a taxi. My dilemma was how to convey to the driver with my limited French vocabulary that I needed him to take me back to the station, pick up my husband and luggage and then take us to Garde Norde, our next train station for the trip to London.

I peered into the passenger’s side window and with the most pathetic hopeful smile I could muster, pointed back to the train station and said, “Baggage” in my best French. It worked! He smiled and nodded. I jumped in the back of the taxi. The driver made a wild u-turn as I used my walkie-talkie to convey to Roger that I would soon be arriving triumphantly with transportation to our next destination.

The Eurostar is one of our favorite trains. Someday I will write a whole chapter about the adventures we have had on this underground pathway between London and Paris. Sitting in the lounge waiting to board was like being at home.

It is now a day off and we’re sitting on a train bound to London from Newcastle. Cambridge is our goal, but we enjoy the train so much, that we decided to take it to London and change at the King’s Cross Station instead of Peterborough. The romance of the train lends itself to writing. Castles on the hillsides, shorn sheep in the meadows and backyard gardens with babies in the swings add up to combine hundreds of years of history with the ever present daily life of this island nation.

Early this morning, Roger and I read the beautiful love letter in the Song of Solomon. There is a phrase in it of the man describing the beauty of the woman he loves. He compares her teeth to “shorn sheep.” I never really understood the comparison until today when I looked out the window of the train and saw a row of shorn sheep. Yes they did look like a row of teeth, with none missing.
Love, history and adventure…all from the window of a train.

The Monet view from the English train.