Roadie Report 21 - The Trip to London by Camilla McGuinn 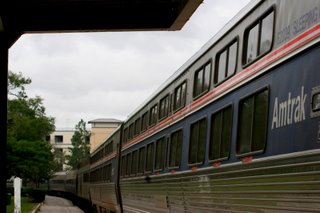 
On September 23, 2006, we boarded Amtrak’s Silver Star train in Winter Park, FL for our overnight ride to New York City. The Silver Star is beginning to get a little shabby, but the compartments are still cozy and the porters always accommodating. Drifting to sleep to the sounds of the train while looking out the window at the moon beams dancing through the trees is the perfect recipe for imaginations and dreams.

The train pulled into Penn Station almost on time. It gave us enough time to check into the Waldorf Astoria, courtesy of the Hilton Honors programs, then catch a taxi to Greenwich Village to have dinner with Melani and Ed Rogers. One of the great benefits of recording on Arista Records was working with Melani who was the head of the publicity department in 1991. We quickly became friends with her and her husband, Ed, and have remained close ever since. Roger has even played guitar on Ed’s recent CD, "You Haven't Been Where I've Been."

Just before I began to work on the itinerary for this tour, the
airports in England experienced an unfortunate threat from terrorists, so Roger asked me to find an alternative to Heathrow and Gatwick, which actually is always a good idea, because those airports are wall to wall with people most of the time. During my research, I found a new airline flying between New York’s JFK and London’s Stansted airport. Stansted is north of London, 70 minutes by train to the city. The airline is called EOS. Not only did it meet our requirement to avoid the major airports, it’s fleet consists of 757 aircraft configured with only 48 seats. The seats recline fully for sleeping and because of a back problem, this is a necessity. There were some wonderful promotional fares available, so the cost of the round trip, including the train compartment from Florida, was less expensive than flights out of Orlando.

As part of the ticket price, EOS had a car pick us up at the hotel at 3:30 on September 25th for our 7:15pm flight to England. When we arrived at Stansted and processed through immigration, an EOS attendant was standing by our luggage. She gave us First Class tickets for the express train to London and even walked us to the train. We felt like we were living in a different era of plane travel. It was a good way to begin this 45-day adventure.

The Marriott County Hall, courtesy of the Marriott Rewards program, was our home for three days. All those one night stays in freeway hotels were beginning to pay off. The first week of the tour was the perfect time to cash in on hotel frequent guest points. We napped for a few hours, then set the hand held GPS for Shepherd Market to meet Roger's agent, Nick Peel, for dinner.

The walk from the hotel took us past Buckingham Palace and through Green Park. It was an unusually warm evening for late September and people everywhere were catching the last rays of sunlight standing outside the pubs with their suit jackets thrown over their shoulders.

As we walked, we talked. England’s history has affected the whole world but in 1963 the sound of four innovative English musicians changed the consciousness of music. I was 13 when I first heard the Beatles but it wasn't until 1987 that I actually met one. Walking the streets of London, we reminisced about that night almost 20 years ago.

1987
Tom Petty had a day off from his touring schedule in St. Petersburg, FL and invited Roger to hang out with him at the Don Cesar Hotel. While they were flying kites, Tom mentioned his upcoming tour of Europe with Bob Dylan called "Temples In Flames." Roger told him how much he enjoyed the Rolling Thunder Tour with Bob and that he would love to experience that camaraderie again. Tom said he would ask Bob if Roger could join them. Within the month, Roger received a call from Dylan’s manager and he was on the tour starting in Israel.

I joined Roger for the last dates of the tour in London for 4 performances at Wembley Arena. While Roger was touring, Rickenbacker Guitar was finishing the prototype of the Roger McGuinn 12-string Rickenbacker and had it sent to Wembley for Roger to play for the first time.

Roger opened the show with the Heartbreakers backing him. It was a honor for Roger when they approached and asked if they could play like a Byrd. A lot of musicians learned their craft from the BYRDS and I love to catch the twinkle in the eye of musicians when they are playing with Roger on “Mr Tambourine Man” and “Eight Miles High”.

On the first night of the Wembley concerts, Roger strapped on his new Rickenbacker. I was at the sound board and was horrified at the sound. The different settings of the knobs on the electronics were still new to Roger and the knob got turned to one of the more shriller settings.

I knew Roger would be joining Tom and Bob for the encore, so I ran to the stage and found Roger sitting and talking to a friendly looking chap. The run and concern over the sound had me breathing hard as I rushed to tell Roger of my description of the guitar sound. Roger smiled and told me to take a breath and that he wanted to introduce me to a friend of his. I smiled at the friend, shook his hand, told him it was nice to meet him - just as my father had always taught me to do - then quickly turned back to Roger with all my sound concerns. He said he would fix it and I went back to the sound board very preoccupied with the guitar sound.

When I returned to the board, I stopped dead in my tracks, grabbed my head with both hands and my lips moved silently screaming, “I just met a Beatle!” Roger had introduced me to George Harrison and I so wanted to call Winkie, my best friend when I was 13 years old. We were both going to grow up and marry George! We never thought about how that could be accomplished, it was just the fantasy of two young teenage girls living on a far away island called Guam in the Pacific Ocean. Now I was in London and I had just shook the Beatle’s hand and told him it was very nice to meet him! I could imagine the sounds of her 13-year old screams as I screamed telling her. Music had transported me back to a moment in time.

The next day, George sent a car to our hotel for us. Joan and Derek Taylor were in the car. Derek had been the Beatles and the Byrds publicity agent and we were all going to Friar Park to have dinner with the Harrisons. 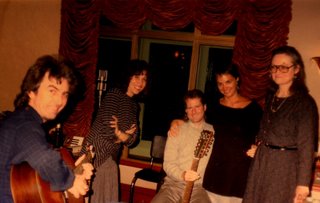 
As we were getting out of the car by the front door of the Victorian neo-Gothic mansion, George leaned out the window above the door and said to come on in. I kept whispering to myself, “Sure wish I could call Winkie.” 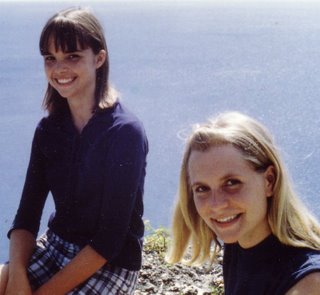 As we walked through Green Park, we laughed about that night of my introduction to a Beatle, then a moment of quiet over took us both - memories of George.

I chose the County Hall hotel because of its proximity to the Waterloo train station. The Eurostar was our next form of travel after three days of radio and press interviews for the tour, the new Martin Roger McGuinn 7-string and the new BYRDS’ box set, “There is A Season.”

On Friday, September 29, we caught the Eurostar to Brussels. When we arrived at the hotel we went straight to the Sixt rental car desk and got the keys and GPS instructions for the BMW that would be our transportation for the next 11 days. Our mode of travel in the States is a Ford Van, but Roger was looking forward to the Autobahn and requested a high powered vehicle to keep up with the other drivers in Germany. I had never driven in Europe, but we had some long drives, so I too was looking forward to seeing how fast I felt comfortable driving.

We opened our eyes early on Saturday morning, loaded the car then set the GPS for Le Meriden Hotel in Hamburg, Germany. Our teeth were clinched as we navigated through the busy streets of Brussels. Once through the congestion of the city, we relaxed, feasted our eyes on the sites of Belguim and Germany as the GPS talked us through the countryside. The complexities of buying gas for a different car in a different language was only one of the challenges facing us on this adventure. Which side was the gas tank on? 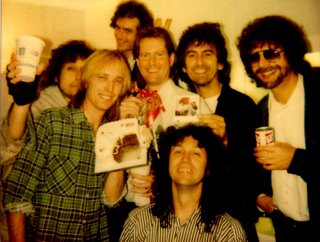 Backstage on the Last Night of the "Temples in Flames" Tour