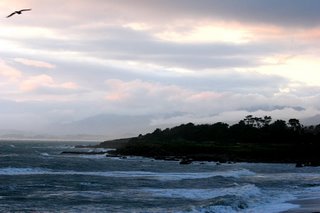 
We left Aspen and headed to San Francisco via Morro Bay, Ca.

Morro Bay had been our home from 1980 to 1984 and we always enjoyed a chance to stop, soak in the sights and sounds of that small fishing town, while saying hi to the people who made our sojourn there a beautiful chapter in our lives.

Our first glimpse of the California coastline was shrouded by the fog rolling in over Moonstone Beach in Cambria. It was nearly sunset, so we found a quaint seaside motel on Moonstone Beach Drive right next to a restaurant that we used to frequent, the Sea Chest. 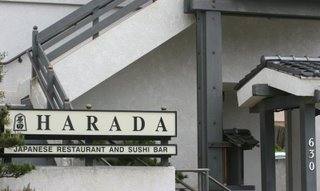 We appreciated the sounds of the beach the next morning, then made our way to Morro Bay just as the lunch hour was winding down. It was wonderful to walk into Harada’s Sushi bar and to see Harada alone, busily preparing for the evening rush.

1984:
Harada had opened his first restaurant in a small building at the end of the embarcadero around 1982. Dinner there was our first priority whenever we came off the road. After one tour, before we even went home, we stopped in for our favorite food. We surprised ourselves by ordering a sushi boat, which was an awesome order for just two people, but we were excited about our recent trip to Florida and wanted to talk about the possibility of moving there.

We were the only people dining at 5pm and as we waited for Harada to prepare the sushi boat, a motorcyle rider walked into the tiny restaurant and sat down at the bar. Roger’s back was toward the door and he quietly asked me why I was looking so intently at the new patron. I felt like I knew the motorcyclist and asked Roger to turn around and see if he did. Yep, he did. It was Kurt Russell. Roger had a curious connection with Kurt - Kurt had married Roger’s ex-fiancee. So Roger walked over to Kurt, introduced himself and invited him to join us. Then we knew why we had ordered that big sushi boat!

After dinner, Kurt came to our home and played banjo with Roger. His enthusiasm was so delightful; I forgot that he was a famous movie star. The night was getting late and we tried to talk him into spending the evening. I was concerned about him driving back to Los Angeles in the dark on his motorcycle, but he wanted to be home in time to pick up his son in the morning. I suggested that maybe his girlfriend that he had mentioned earlier, could pick up Boston, his son. He smiled and asked, “Do you know who my girlfriend is?” We both shook our heads - we very seldom read the magazines that kept people abreast of famous relationships - and when he said, “Goldie Hawn,” I replied, “Well she seems nice, can’t she pick him up?” He laughed, picked up his helmet and rode into the night. We started laughing too. Imagining Goldie Hawn standing at the door of her boyfriend's ex-wife was funny. 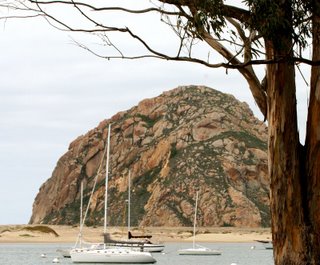 The Rock at Morro Bay (Photo by Camilla)


2006:
The neighbors in Morro Bay who cared for us as surrogate parents were Susie and Stan. Their zest for living was an inspiration and they were the ones who fed the cat that had adopted us, paid our bills, picked up our mail and kept the home fires burning for us while we were on the road, all those Morro Bay years. Stan passed away last year, so there was a moment of sadness as we knocked on Susie’s door, knowing it would just be her. Susie’s sense of humor was beautifully intact and we had a wonderful evening with her.

The next day we headed up Highway 101 to San Francisco. We had thought about taking Highway 1, but it was closed due to washed out roads from the recent storms. On the way to San Francisco, Roger told me about his first trip to the City by the Bay:

1960:
While Jim (Roger) McGuinn was accompanying the Limeliters at the Ash Grove, a 19-year-old hopeful actor introduced himself. His name was David Crosby and he had just finished acting in a play at the Ashgrove the week before the Limeliters’ appearance.

David suggested that he and Jim hang out together and offered to pick him up at the Park Sunset hotel. David had a convertible in which he had installed aircraft seat-belts. Very few cars had seat belts then and David was very proud of the addition he had made to his car. Over the next week, Jim taught David a few guitar chords and David taught Jim how to drive.

Jim was a Chicago city boy where cars weren’t really necessary. Learning to drive David’s chevy with a manual transmission was the first clue Jim had of David’s sense of humor. After a few times around Santa Monica Blvd, David had Jim drive up the steep hill of La Cienaga Blvd. For a novice at the clutch, it was a baptism by fire.

The Limeliters finished their Los Angeles gigs and told Jim to look them up if he was ever in San Francisco. David suggested that Jim go home with him to Santa Barbara. When they arrived at David’s mother’s house, she made them the most exotic sandwiches Jim had ever tasted, lamb and avocado. Southern California was indeed different from Chicago.

Jim stayed at the Crosby’s for a few days, then David found him
a room at a nearby house filled with fraternity boys from Cornell University. Mornings started with the frat boys "breakfast of champions" -Coors beer. After breakfast they would crash the private beach of the Miramar Hotel. Their nights were spent drinking gin and tonics with the Santa Barbara society scene. Jim lost his wallet at the Miramar beach and was shocked to find it at the front desk with all his money still in it. Southern California was indeed different from Chicago.

The beach and the parties were fun, but Jim came to California to work, so he caught a bus to San Francisco. While Jim was seeking his destiny, Chris Hillman was in high school and practicing his mandolin when he wasn't tending to chores on the family ranch in Northern San Diego County. Jim Dickson was working on feature films, working for Benny Shapiro at the Club Renaissance and keeping his hand on the beat of the music of the times.