Maureen and John waved goodbye to us early in the morning of July 7th. We knew the trip to Orlando would take about 11 hours because in May we had made a previous detour to Nashville at the request of Dolly Parton. She was recording a CD of her favorite songs and “Turn, Turn, Turn” was on her list. Dolly wanted Roger to play his Rickenbacker and sing with her on the song. 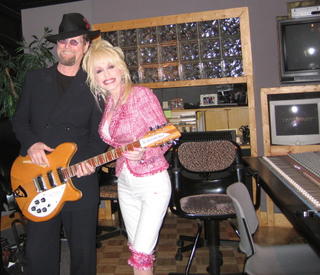 Dolly Parton is an amazing person. I once heard her say in an interview something like this; “I’m just like the girl next door…that is if you live next door to a freak show.” That statement gives a delighful insight into her sense of humor about herself, but in reality as Roger says, she’s a genius. Not even taking in account her incredible voice and talented songwriting, her business acumen, in a business that oppressed women for years, is astounding.

When we walked into the small studio, Dolly got just as excited at seeing Roger’s guitar as his fans do when they see it. While Roger tuned up, Dolly, her assistant Judy, who has been her friend since childhood, and myself talked girl talk. Our conversation went to age. There was a time when women never discussed their age, but I think we baby boomers are just shocked that we’re over 50. Dolly and Judy laughed about their upcoming joint 60th birthday party.

Roger sat down with Dolly at the recording board and played the tune, then he suggested to Dolly that there was a nice harmony part she could sing. She asked Roger to sing the part. The CD, "Those Were The Days," will be released October 11, 2005 and is filled with the people who sang on the original songs. I wish I could have been a fly on the wall for all those sessions.

The Nashville traffic leaving town on this sunny July morning was light so I turned on the satellite radio. We were horrified to hear the news coming from the television feed of CNBC. London had just been racked with bombings to their transportation systems.

My breathing became short gasps for air as we listened to the conflicting news reports. I flashed back to September 11, 2001. We were in Malibu, CA., on tour with Judy Collins. I had just finished my shower when I walked into the room and stared at the television set. The sound was on mute, but the pictures screamed. The World Trade Center was collapsing into rubble and the nation came to a halt. Roger’s appearance on The Craig Kilbourne show was canceled. The concerts were canceled. We started immediately to drive home to Florida. As we crossed the desert, we lost all radio and television reception and we were desperate to know what was happening in our country. During our last telephone conversation with our attorney, Danna, whose husband is in law enforcement in Southern California, she told us that they had been warned to fill their gas tanks. We didn’t know if there would be enough gas to get the frantic population across the nation. The airlines were grounded and everyone wanted to get home. Traffic was going east and west. Interstate 10 became a busy highway even during the wee hours of the morning. It was after that trip that we installed satellite radios in our van. We never wanted to be out of touch in a crisis again.

Now, almost four years later, we were listening to the reports of another senseless tragedy. I kept changing the channels because all the networks had different stories. No one knew exactly what had happened. The number of bombs kept changing. All we knew was that a lot people had been killed and our hearts were grieving for all the people of London and England.

We listened to the world leaders give speeches, but it was the statement delivered by London’s Mayor Ken Livingstone that made an impact on us.

“I want to say one thing specifically to the world today. This was not a terrorist attack against the mighty and the powerful. It was not aimed at Presidents or Prime Ministers. It was aimed at ordinary, working class Londoners, black and white, Muslim and Christian, Hindu and Jew, young and old. It was an indiscriminate attempt to slaughter, irrespective of any considerations for age, for class, for religion, or whatever.

That isn't an ideology, it isn't even a perverted faith - it is just an indiscriminate attempt at mass murder and we know what the objective is. They seek to divide Londoners. They seek to turn Londoners against each other. I said yesterday to the International Olympic Committee, that the city of London is the greatest in the world, because everybody lives side by side in harmony. Londoners will not be divided by this cowardly attack. They will stand together in solidarity alongside those who have been injured and those who have been bereaved and that is why I'm proud to be the mayor of that city.”

His so simply made the point that this was an attack on innocent people.

I finished my 100-mile shift and lay down on the couch in the back of the van. I wanted to escape from the visions in my head of the horror taking place in London. Over time I closed my eyes, but then I saw visions of the trains that Roger and I had enjoyed on every trip to England. 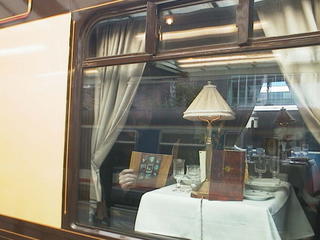 (Roger on a train in England. Photo by Camilla)

Our favorite concert tours have always been flying to England, buying a BritRail pass and taking the trains from city to city in the United Kingdom. Roger’s London agent, Nick Peel, always smiles at us like a parent to clueless children when we extol the wonders of the British rail system. He doesn’t realize that in America, our rail system is so sparse that every train ride is a delight to us. Now with my eyes closed, visions of the British transportation systems being bombed lingered in the shadows my mind. How many families were crying and groaning? How many people were looking frantically for the one they loved so much? There was no sleep on my off shifts, just tossing and prayers.

It was a long day of driving and when we finally arrived in Orlando, the sun was casting its last colors on our garden. Usually after a tour we say a prayer of thanks then enjoy the sunset in the garden, but on this night we wanted to reach out to London. We didn’t want to clog the phone lines, so after prayer, we emailed.

Later, as the stars initiated their nightly twinkle, we did sit quietly in the garden reflecting on the events of the past three weeks, the blessings and the sorrows. The tour was over and we were safely home.