Roadie Report 80 by Camilla McGuinn - The Sweetheart of the Rodeo - 50 Years Later!


We woke up early because we were so excited about celebrating my birthday on our porch during this break from touring since September 5th with Chris Hillman, Marty Stuart and the Fabulous Superlatives, celebrating the 50th Anniversary of the "Sweetheart of the Rodeo" recording.


The idea for our tour came to us while we were sitting in the airport in Buenos Aires, on February 6, 2018. Our conversation centered on Chris and Connie Hillman. They'd had a particularly difficult 2017.

Chris was on the road promoting his new recording "Bidin' My Time" when his producer and our dear friend, Tom Petty, suddenly died. Then on Chris's birthday, they returned to their home after a celebration dinner to find that their house had been caught in the Thomas Fire. All their neighbor's houses were gone but most of theirs was still standing. They had to move out for months. 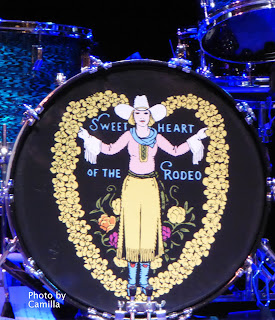 We wanted to do something special for the Hillmans and our conversation  turned to the recording of the "Sweetheart of the Rodeo." It had been 50 years since Roger and Chris released the recording to a very chilly reception, but over the years the music has risen to the top of  the ranks of appreciated Byrds' recordings. 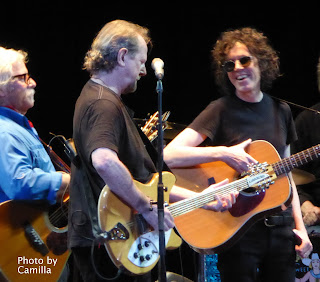 We began tossing out an idea to each other, "What if we did a couple of dates to celebrate the "Sweetheart" album? Maybe we could get Marty Stuart and The Fabulous Superlatives to join us." Marty with the Superlatives had toured with Roger a couple of years ago and Roger loved every minute of playing with those amazing musicians.

Between emails and phone calls, Chris confirmed he was on board. Then it was the matter of seeing if Marty was available. Marty was touring with Chris Stapleton, so his schedule was filled, but he so wanted to do it that he gave the go ahead to start booking a few concert dates.

Roger insisted that his agent, Andrea Sabata from Skyline Music, book the tour because Roger is very particular about  where he plays and how often he will play and travel between concerts. For Andrea, it was a big challenge. She had to work around Marty's schedule and get approval from promoters  in the markets where Marty was playing with Stapelton. 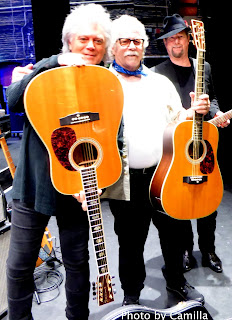 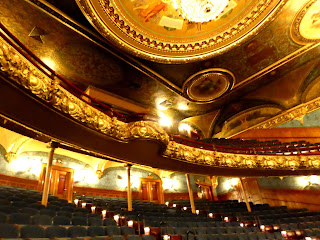 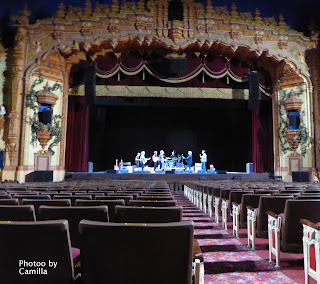 Dates in California came together quickly, so we packed the van and hit the road. The Theater at the Ace Hotel in Los Angeles was the first of many beautiful theaters to follow. We really just wanted to do a few shows, but as the word spread and the schedule allowed, more dates kept streaming in. Some cites sold out so fast that a second night was added. Los Angeles, Albany, New York City and Clearwater were clamoring for a second show. Promoters and fans were inundating Andrea with requests for the show, but the schedule filled quickly and many were disappointed. Fans were buying airplane tickets from as far away as Europe.

The scramble for dates was intensified because this is a 50 year celebration and the year ends with the last date in Fort Lauderdale,  Florida on Dec 19, 2018. That show is almost sold out, but there are two December concerts  in Florida that haven't sold out yet, but there aren't many seats left. Ponte Verde and the second Clearwater date, which was just added, might have some seats available. I think the last show will be a very emotional moment for the players and the crew, I know it will be for the roadies, me and Connie.

Connie Hillman  had a career in music management for years while Chris was always touring. They had never really toured the way Roger and I do, so we became mentors to these two music pros on how to tour like it's a honeymoon.

After the concerts on the west coast, the Hillman's flew from their home in California to Kansas City and rented a car. We were a caravan through the mid-west and the east coast. Every morning, before we shifted into drive, Roger and Chris would sing into the walkie talkies (provided by"Mr. Techie" - Roger ) the theme from the 50's American Western TV series "Rawhide"

On the few days we weren't together I missed seeing Chris and Connie's car in the rear view mirror. 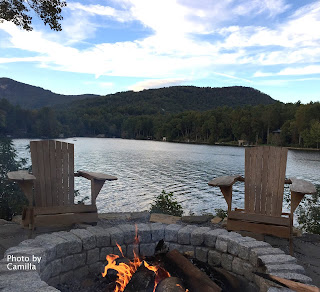 There was one special stop where the Hillman's weren't able to get a room reservation. It was a peaceful place on Lake Toxaway in North Carolina. When we told our destination to the shows monitor engineer, Radar was excited.
He grew up in those mountains in NC. Actually, his name is Cody, but he reminded me of the character Radar from the TV series MASH. He was able to get everything done before anyone asked for the problem to be resolved. I used that moniker for him whenever I talked to him. The other smiling fact is that Radar and I celebrate our birthdays on the same day. He was turning 21 and I was turning 13... well that's if you add the two numbers of my age together, and then I'm the same age as Roger. We were both driving home during the break of the tour to celebrate our birthdays on October 22nd.

Connie and I became the roadies for our favorite guitar players. We even joked about making "The Roadie Work Out Video." Lift that guitar, hold that door, drive that van!" We are even  politicking for a badge to wear for driving through the constant rain remnants of hurricane Michael and sleeping in a hotel without electricity that night.

I had booked hotels that could accommodate the 8ft vertical clearance needed for our van and Connie booked the same hotels. We don't drive after 5pm, so the routing took a little work but it was worth it. We got to hotels, checked in, had cocktails and dinner. Connie and I were treated to two old friends telling funny stories about their Rock'n'Roll days and the mischief they got into.

But there was something more special we all talked about... our faith. We drove together, we ate together, we drank together, we introduced them to our friends across the country but most importantly, we prayed together.

It's 2:18 on October 22 and Roger is driving on the Florida Turnpike as I sit in the back of the van. I had finished my accounting for this leg of the tour and saw a blurb about my BLOG. I read it and was horrified to realize that I have written very little since my last birthday tour in 2017. Today is my birthday, again!  I do apologize to my 13 readers. You have been so patient and you are always encouraging me to write more. I don't know how this year passed so quickly.

I guess my tardiness  verifies  the old saying, "Time flies when you're having a good time!"