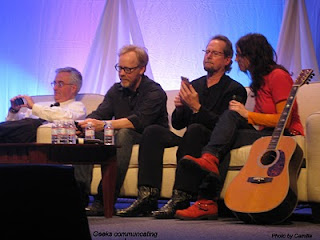 During the early hours of January 27th, we watched from our balcony as the Queen Victoria glided through the fog under the Golden Gate Bridge for its maiden port call in San Francisco at Pier 35. 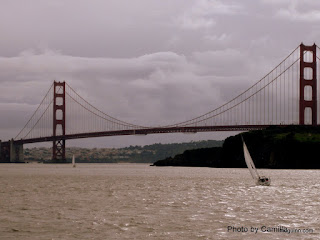 After one last meal a Table 18, goodbyes were said to the staff and to our new friends, then we caught a taxi to the Nob Hill condo we had rented sight unseen. 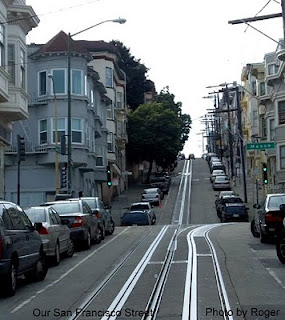 At first glance, the outside of the 3 story structure that had survived the “Great San Francisco Earthquake of 1906” didn’t exactly give me confidence that I had made the right choice. The website did show the outside, but it was the modern remodel on the inside that caught our attention. I was holding my breath as we carried the luggage and guitar through the locked foyer, up a few stairs and unlocked the door to our home for the next two weeks.

Roger was the first to walk into condo. I exhaled when he turned around to look at me with a big smile on his face and said, “Sweet!”

The pictures on the web site of VRBO didn’t lie. I chose this particular place because of the modern kitchen, bathroom and the charming front bedroom that had a view of the street all the way to the bay. 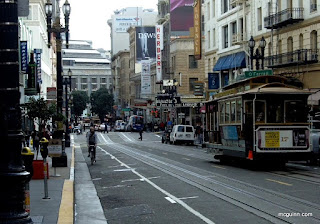 The condo building is situated at a corner stop of two of the cable car lines (sfcablecar.com). Even though we had ridden the cable cars on previous trips to San Francisco, I always felt like a tourist and insecure as to how to get on and off the antique cars. This time I researched the Cable Car Website to learn all about riding the cars like a native.

We wanted to do everything and go everywhere at once, but the Glaucoma Research Foundation was sending a car to pick us up at 3:30pm to sound check for their annual fund raiser. It was a formal affair, so we needed to unpack our clothes and get ready quickly.

The Glaucoma Research Foundation brings together scientists and pharmaceutical companies to do research on finding a cure for the leading cause of uncorrectable blindness in the world. After the sound check, we sat in the back of a room listening to doctors tell of their new discoveries. Roger will probably always have to place stinging eye drops in his blue eyes twice a day in perpetuity, but because of continuing research there is hope this necessity will not be inevitable.

At the gala dinner, we were seated at the table sponsored by the Santen Pharmaceutical Company. The lovely and energetic CEO, Dr. Andrienne Graves quickly became a friend for life. Not only did we have a common interest in ophthalmology, we all loved to entertain while cooking. When she shared that interest with me, I said, ‘We’re here for two weeks. Roger’s schedule isn’t full yet - let’s cook!” Andrienne immediately made plans for us to cook in her home in Napa on February 5.

The morning after the fund raiser, we arrived at KFOG radio station to chat on the morning show and for Roger to play a live version of “Eight Miles High.” A UC Berkeley professor driving to his class on the campus was listening to the radio show. 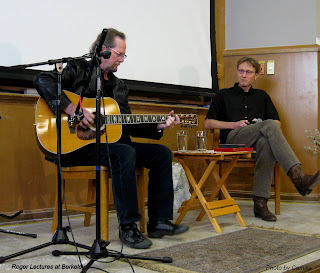 Dr. Amundson had just used a YouTube video of “Turn, Turn, Turn” in one of his lectures. When he heard that Roger was in the Bay area to be a guest at the Macworld convention, he decided to pursue the possibility of Roger coming to his class. Roger’s agent sent us the invitation. Roger loved the opportunity to speak to students in an open forum. The two week schedule was filling in.

The early hour of the KFOG interview was an extra blessing because the streets of San Francisco were beckoning. The weather was beautiful. The DJ told us that sunshine had hidden itself for weeks until that day. Since the sun was shining, and the affect of being on the ocean for 19 days was still swaying our balance, we decided to walk down to Fisherman’s Wharf to buy our Cable Car Passports. 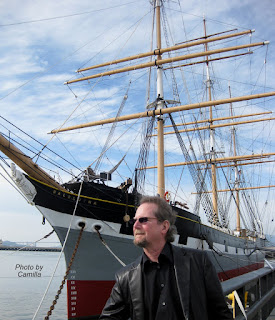 Allioto’s on Fisherman’s Wharf was just opening its doors for lunch when we walked by. Being one of San Francisco’s oldest restaurants with a striking harbor view makes it a dining stop for us every time we visit the city. After a light meal of calamari and salad, we strolled to Beach and Hyde Streets to buy the cable car passports and to hop our main San Francisco form of transportation, the cable car. This was better than Walt Disney World!

The condo kitchen was supplied with everything we needed, except food. Fortunately the condo also had free Wifi. Google maps showed us all the grocery stores close to the cable car lines. We found a natural food store, a cheese shop and a wine store all on Polk Street, just 3 blocks from the cable stop on Hyde and Pacific.

Ted and Jeanmarie, our New York tablemates from the Queen Victoria, made reservations for us to meet at Yank Sing for lunch on Friday, Feb 29. We walked three steps out of the front door, caught the cable car to California St. Then we caught the California Line to Market and jumped off just a block from 101 Spear St. This award winning Dim Sum restaurant is located in the Rincon Center. A big appetite and reservations are recommended. Ted reserved a table close to the kitchen doors so we would have the first opportunity at the continuous delicious bounty. 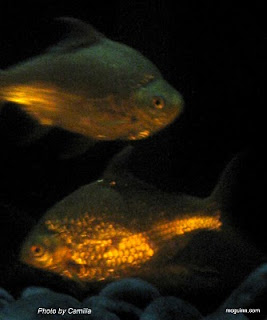 Jeanmarie mentioned that they enjoyed the Moss Room Restaurant at the California Academy of Sciences. Adrienne Graves had also recommended that we go to the museum, so with cable car passes in hand we took the cable car to the Light Rail Line ”N” to Judah. Got off on Irving St and 9th Ave, and then walked to the museum. (The passes are honored on all the public transportation within the borders of SF) 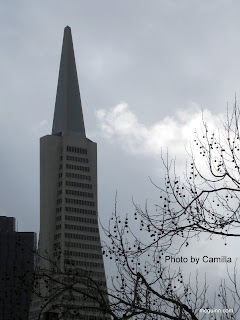 San Francisco is a city of food and we planned on tasting as much as we could but the condo was so delightful, we began entertaining friends immediately.

Janet and Steve Wozinac knocked on the door that Sunday evening. It was our first meeting with Steve’s bright and charming bride. We were also touched that they would take the time to stop by for a visit. I only wished they could have made it for dinner. I couldn’t wait to cook for folks in our San Francisco kitchen.

We began this San Francisco adventure with only the Macworld convention on our calendar. Our plan was to live each day as it came. Dinner was served in our kitchen 4 different evenings for friends from the Rock Bottom Remainders and those “Cranky Geeks". One of my favorite remarks from our flow of guest was, “With the sound of the cable cars, this is like living in old San Francisco.”

The sounds of cable cars from morning until midnight never kept us awake or bothered us. In fact it was the morning cable car that acted as our alarm clock on the mornings we needed to get up at 6:30am. 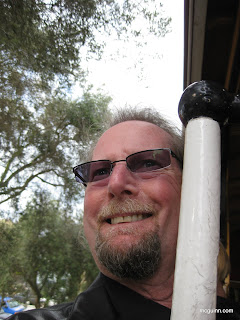 Everyday Roger and I would shop for food and everyday as we got off the cable car with our groceries, we would look at each other with the same big smile that said, “This is great!” 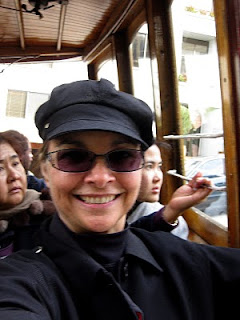 If the time in SF had been longer, the joy of shopping and cooking might have waned a bit and we would have explored more restaurants. We did experience three other restaurants, besides the two already mentioned, that we have put on our permanent list of restaurants to enjoy:
Zarzuela, a Tapas restaurant and Okoze Sushi. Both of these restaurants are at the Union and Hyde St cable car stop. The third restaurant we found while exploring the Farmer’s Market at the Ferry Building: The Slanted Door, Vietnamese cuisine. 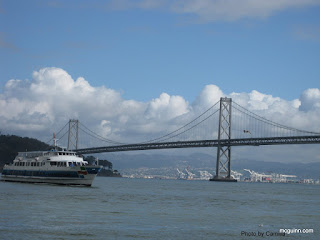 Laurie Hutton, the wife of Three Dog Night member Danny Hutton, and I have been emailing for years. When we realized that our schedules were going to coincide in the Bay area, we arranged to get together. On February 8th, Roger and I caught the ferry to Sausalito and the Hutton’s were waiting for us on the dock. The conversation over lunch included memory lane and plans to make more memories working together in the future. After lunch we caught the 3:00pm ferry back to the city and the cable car to our home on the bay.

Finally, the day came for trip's purpose, the Macworld convention. Of course we went to the convention center on the cable car with Roger carrying his guitar. It was great to see Leo Laporte again. Heather Gold, Warp 11, and Adam Savage were the other show guests. One of my favorite pictures is the one I took of them on stage - eyes glued to their iPhones.

At 8:00am on Feb 13, David and Lou, friends met while playing with the Rock Bottom Remainders, loaded our bags and guitar into their car and drove us to the Amtrak station in Emeryville. 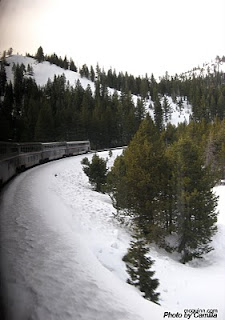 The route home to Orlando was through Chicago and Washington, DC. We had a six hour layover in DC, but the train was slowed by the snow, so I only had two hours to shop in the Washington train station. It is one of my favorite United States train terminals. I was concerned that cabin fever would set in on the 5 day train trip, but both of us were relaxed and busy the entire time. Our Verizon 3G MiFi kept us connected so I could continue working, but there was so much natural beauty passing by the train windows that my concentration was seldom focused on my computer screen - my mind seemed to be in a perpetual dream state. 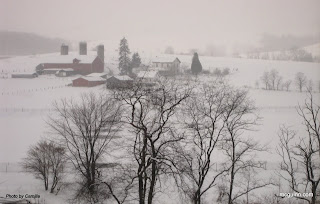 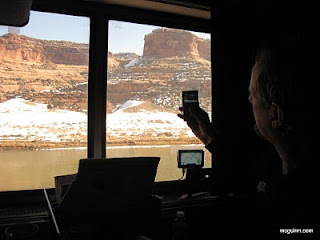 Roger always has some gadgets with him to keep him busy, but our favorite moments were those when he practiced his guitar and sang songs to me. We were going to be home for a few days, then a trip to Pittsfield, Massachusetts for a concert. After that we would celebrate 32 years of married adventure together on April 1st. Our anniversary date always makes me laugh.

Oh, by the way. If you think this sounds like a travel guide, the result was intentional. Three of our friends were so enthralled with our adventures on the streets of San Francisco, that they have rented the larger condo in the building for a week in May. They wanted to know just how we did it!

The independent car company sent by Carmen of the Glaucoma Research Foundation is named Compass Limo, 800-699-0746. We highly recommend it when your not jumping on a cable car, especially for airport trips. 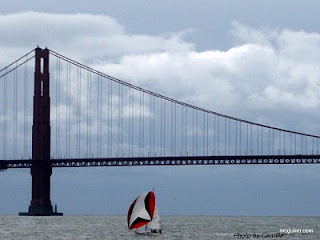