Roadie Report 75 by Camilla McGuinn - I Have a Purple Heart 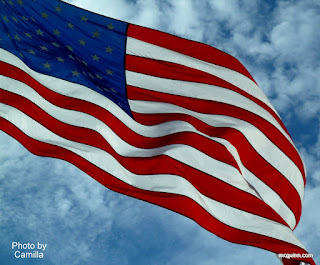 "Camilla, why haven't you written the blog lately?"

I didn't know how to answer Roger. We have been on some wonderful adventures thanks to his long career in music, but something was stopping me from writing about them. I wasn't sure that our adventures would be of interest or maybe just sound so frivolous in light of the turmoil in the world. Maybe I just had the "writer's block" that I've heard about. Not that I can call myself a writer. I know lots of them, and they all talk differently. Well I'm sitting here now and very interested in what comes on the screen from my fingers. There is a reason I'm here today, but I will get to that later.

The spring of 2016 was filled with concerts in the northeast. We have a rule about not driving north of Interstate 40 between November 1st  and April 1st. I have driven in enough snow storms to last me for the rest of my life but our rule didn't pan out. Our trip to Woodstock, VT was dusted with snow. It wouldn't have been so bad except the GPS decided the shortest way over the mountain was the best, the cell phones lost signals and the road got narrow. We decided something was wrong, so we slowly backed up, got on a larger road and hoped it would lead us to Woodstock. I think I will carry a paper map with me from now on and maybe change our travel rule to begin on May 1st.

While we were in the North we stopped in NYC to record a video with Jakob Dylan for a project he has been working on. Roger is always surprised at how the children of his friends have grown into adults. We're still surprised by his adult sons.

My favorite tours are when we see people we know. In June we flew to NYC to see Tom Petty inducted into the Songwriters Hall of Fame. Roger was honored to be picked by Tom to deliver the induction speech. We were told that it shouldn't be longer than 90 seconds. The first words Roger said after he had sung "American Girl" was, "Not everyone got that message." It was a long night. 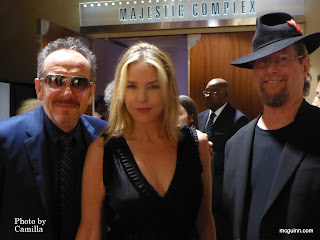 We were also happy to see another friend that night, Elvis Costello. He was being inducted too and we finally got to meet his lovely wife, Diana Krall. Elvis always makes me smile with his genuine enthusiasms about everything. 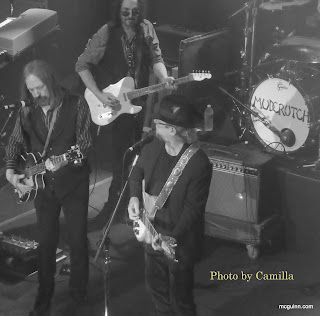 Tom invited Roger to join Mudcrutch for two concerts in the city after the ceremony, so we had a few days to explore. Our hotel was in the theater district, so I thought it would be fun to explore the "old New York" scenes. We quickly found Sardi's and made friends with two bartenders, Joe, who has been there over thirty years and Jeremy. Jeremy told us that he was going to Tom Petty's concert the next night. We laughed, not sure if he knew Roger but over the next couple of months, he got to know us well. The upper bar in Sardi's is a place I now recommend to our friends when they travel to the city. Walk into Sardi's, turn right, walk up the stairs then turn around to find the bar. Say hi to Joe and Jeremy from us.

The month of July was spent enjoying our home. That is a treat we seldom get and we weren't even sure we would like it, but it was fun! Walking every morning to Trader Joe's to buy dinner supplies, then coming home and jumping in the pool to cool off.

Buzz Aldren held the Share Space Foundation's Apollo 11 Anniversary Gala at the Kennedy Space Center on July 22 and we happily attended. Spacemen are a favorite of ours. A special guest was George Takei, Mr. Sulu from Star Trek. Roger was lecturing on the Queen Mary 2 on one of the transatlantic voyages the same time George was. We have all found a wonderful way to get to and from Europe. 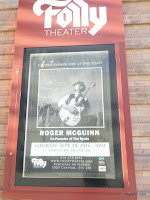 In September we hit the road with our unusual summer tans for concerts in the Midwest. After the Green Bay, WI show, we stopped in Oshkosh before the show in Waupun. The hotel was next to a family run restaurant. What we didn't realize was that everyone who walked into the bar became part of the family. By the end of our dinner, we were all joking with each other on a first name basis. I was a major source of laughter when I tried to pronounce Waupun, our next concert city. I don't think I ever got it right.

The tour took us back across the country to New Jersey where we had time to stay at one of our favorite hotels, The Sheraton, Lincoln Harbor. Two fun days were filled with riding the ferry to NYC, exploring old landmarks, stopping at Sardi's to invite Jeremy to the Bergen Performing Arts Center show and  introducing Patrick, Roger's son, to the Sardi's experience.

On Thanksgiving Day, we arrived in NYC on Amtrak's, Silver Meteor. The train pulled into Penn Station shortly after the Macy's parade had ended. We were amazed how easy it was to get a taxi. Roger was scheduled to give two lectures on the Queen Mary 2 for the voyage to the Caribbean. Before we boarded the beautiful ship, we had a day to find our Thanksgiving feast. Well, that's not a good idea on Thanksgiving Day in NYC. All the restaurants are on a fixed menu and the reservations are booked. I'm not a big fan of a plate of turkey with the "fixins" but I had an idea. Juniors, a famous deli, was just across the street. I told Roger to chill the champagne and I would get us dinner. Those turkey sandwiches and the bottle of gifted Champagne from friends was one of my favorite traveling Thanksgiving Days. My favorite Thanksgivings are when we have time to invite 30 friends to come to our home and cook and cook for three days. 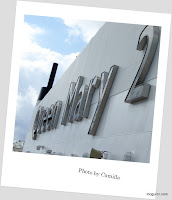 After the voyage, we were sitting in the airport waiting to board the plane back to Orlando.

Sitting next to Roger was a man from St. Thomas. We had been there years ago looking for Creeque Alley from the Mama and Papas song. Roger mentioned our search to him and he told us that his last name was Crequee and the alley had been named after his family. He also corrected us on how to say the name. It's not pronounced  "creek alley" it  is pronounced "creekee alley." How can we ever understand our steps? I'm always in awe.

Well I've finished the highlights of 2016 and there is a funny story coming about our trip to Hong Kong in March of 2017, but the real reason I wanted to write today was because last night I realized it was Memorial Day Weekend.

Roger and I don't have cable. Our television watching consist of a lot of PBS that is broadcast over the air. After dinner we began watching a show about  Alaskan Natives who served in Viet Nam. Then there was another show about the Doolittle Raids over Japan during World War 2.

I watched the shows with tears in my eyes because  there is a chest in my room that protects  a "Purple Heart." My father received it after he was shot in Viet Nam.

Aaron was 17 when he ran away from the orphanage, lied to the recruiting officer about his age and joined the Navy. He was sent to the Pacific to fight the Japanese on board a destroyer as a hospital corpsman. One of his older brothers couldn't get into the Navy because of an eye problem, but the Army took him and sent him to Europe as a gunner on a tank and that's where he lies.

After the war Aaron went back to the orphanage for a reunion and that's where he met Minnie. They were married and had a son who they named after Aaron's army brother.

Aaron stayed in the Navy and when the Korean war broke out, he was sent to Korea. It was his second war.

In 1969, I graduated from high school, my brother and I both went to college and daddy went to Viet Nam. This wasn't like the other tour of duties. He was stationed on the front lines with the First Marine Division. He was the senior corpsman and was responsible for sending out the young corpsman with the patrols . I met him in Hawaii for his R&R with my mother. He walked slowly off the plane and looked 30 years older. My mother figured he wouldn't want to stay on the military base and she was right in finding a small hotel for us. The first thing he said, "Let's get off this base." We were together for a short time, then he sadly boarded the plane back to Viet Nam.

The next time I saw him was in the hospital in Norfolk, VA. He had been shot by snipers in the leg, but the alarm that shocked the doctors enough to send him to Alaska was his blood pressure. They had to evacuate him. He spent his twilight tour, the last station of service before retirement, in Norfolk. He retired from the Navy with 30 years of service and three wars. He was 47 years old.

After the retirement dinner, he went to work for DuPont in Richmond, VA as a health officer. He died quickly one night of a stroke. He was 52 years old.

Memorial Day is a day that should be remembered. It's not the wars we remember, it is the people, all the people who sacrificed and suffered. The warriors and the innocents. Roger and I have visited Viet Nam twice. I wasn't sure I wanted to go there, but I'm glad I did. The people are so precious, the country is beautiful. The elders don't talk about the American War. But we will remember!