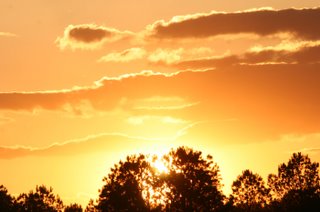 The morning sky (photo by Camilla)

We arrived safely home in just four days after an overnight stop in Tucson. Our long Interstate hauls always begin very early in the morning. The moments just before the dawn are enchantingly serene and dark. Trucks are few and only occasionally do I see the low beams of a car in my rear view mirror. I love driving in the quietness of daybreak as the sun’s splendor inflames the morning sky.

Once we settled into our house, we had just four days - to open the mail, wash the clothes and take our morning walks - before we packed the van again for a concert in Oaklyn, New Jersey. 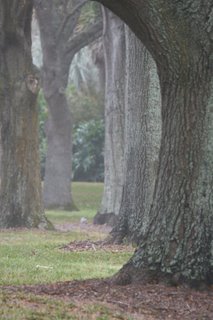 The Morning Walk (photo by Camilla)


Morning walks always put us back on our home schedule. In the summertime, walks in Florida should be done early because the temperature rises as the sun does. Walking is good for couples. There are no distractions and a lot of ground can be covered in 30 minutes. Even though Roger and I are together all the time, the process of a walk opens our conversations to a myriad of topics. It also helps us to remember the stories of our lives. This is the story of Roger and The Chad Mitchell Trio.

Chad Mitchell was waiting at the arrival gate at Idlewild Airport when Jim disembarked from the American Airlines 707. After gathering Jim’s guitar, banjo, and luggage, Chad hailed a taxi for the ride to the Schyler Hotel in New York City.

Jim knew little about the Chad Mitchell Trio and wasn't familiar with their history. Chad enthusiastically told him the group's story on the ride into town.

Chad, Mike Kobluk and Mike Pugh were members of the Glee Club at Gonzaga University in Spokane, Washington. Catholic priest, Father Beaver felt they had the potential for a career in music. He convinced them to join him in his station wagon for a cross-country adventure to seek out the fabled folk music scene of New York City's Greenwich Village. On the way to the City, Father Beaver was on the lookout for places where the trio could perform, sometimes for food and sometimes for money. By the time they reached New York, they had not only survived the trip, but had made enough money to live on for while.

Father Beaver was energized by the cross county success and continued to knock on doors for the group. He managed an audition with Bertha Case, a literary agent who also represented the singer Nina Simone. Miss Case was so enamored by their sound that she took them under her wing, loaned them money and knocked on more doors for them.

They were signed to Coplix Records and Milt Okun, an arranger and conductor with Harry Belafonte Enterprises, was hired to guide the Trio musically as their director and arranger.

Father Beaver returned by himself to Spokane and Milt Okun became the new fatherly mentor of the group. By Thanksgiving, 1959, the Chad Mitchell Trio had their first booking on a major television show, The Pat Boone Show. Milt also introduced them to Harry Belafonte who arranged for them to appear with him, Odetta and Miriam Makeba at Carnegie Hall on May 2, 1960.

That summer, Mike Pugh decided he wanted to return to school; the search began for another member to take his place in the trio.

Chicago promoter, Frank Fried, later a manager of the Trio, suggested to Chad that they hire Jim McGuinn as their accompanist and to help Chad look for the new singer.

The auditions started the day after Chad picked Jim up at the airport. Chad wasn’t hearing the "voice" he wanted, so he and Jim went to Boston to explore the folk scene of Cambridge.

The October air was crisp when Jim walked into Club 47. He was fascinated by the lilting voice he heard from the stage. Standing there was a beautiful young lady with long black hair, playing the guitar and singing Miriam Makeba and Bob Gibson songs. She was an unusual folk guitar player; she actually used the guitar picking styles that Jim had learned at the Old Town School of Folk Music. He was mesmerized that fall in New England by the brilliant colors of the turning leaves and the intriguing beauty of Joan Baez. Chad even mentioned that she might be a good third voice for his trio, but ultimately they left town without their third member.

Back in New York, auditions continued and finally Broadway chorus singer, Joe Frazier, was tapped as the replacement for Mike Pugh, just in time for rehearsals for the Trio's engagement in Las Vegas at the Rivieria Hotel. During those rehearsals, Milt Okun was a gentle but exacting coach. Jim found himself often bored during the vocal lessons strumming the same three chords for hours. Every once in awhile he would break the monotony with a Flamenco guitar run. Milt would look over his glasses at the distracted guitar player, slowly put his finger to his mouth and say, “Jim, shhh.”

The Las Vegas engagement was for two weeks, opening up for Bob Crosby and the Bobcats. It was Jim's first Christmas away from home and it was an exciting city for the eighteen-year-old. The excitement was greatly enhanced because he somehow managed to get an "exaggerated" identification card.

The group toured the college circuit with Bob Newhart and Miriam Mekba. On long road trips, Jim sat next to Miriam in their rented station wagon and she would tell him stories about her homeland, South Africa. She told him that even though it was a sad land, it was a beautiful land and that he should definitely go there and see it for himself if he ever had the opportunity. She also influenced him musically with songs from her country. He would use the lessons she'd taught him years later while writing "So You Want To Be A Rock 'N' Roll Star" with Chris Hillman. 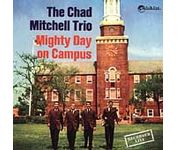 The Chad Mitchell Trio’s fame was growing. The Brooklyn College concert in New York was recorded live on their new label Kapp Records, and the sounds of the enthusiastic audience spilled into that recording. Jim was particularly pleased about this record because unlike his experience with "The Limelighters,” he was not only given a musician’s credit; he was noticeably on the cover of the album with the trio even though that created a point of confusion - a trio with four members. “Mighty Day on Campus” was released January 1, 1961.

“Mighty Day On Campus” was greeted with great critical acclaim. The success inspired Kapp Records to have the Trio record another live album in March of 1962. This time, they chose the more intimate Greenwich Village setting - the Bitter End, a favorite venue of the nationally known folk artists of the time. Jim was on the cover of “At the Bitter End,” standing in background playing his long neck 5-string banjo. 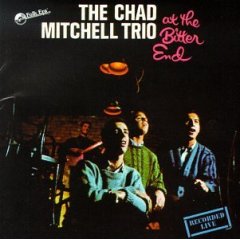 In the spring of 1962, under the sponsorship of the State Department's USIS, the Chad Mitchell Trio toured Central and South Americas to perform in eleven countries in fourteen weeks for what was called a “Goodwill Tour.”

Two federal agents greeted them in Rio De Janeiro. As one of the agents shook Jim’s hand, he commented to the other one, “He looks like Bobby Kennedy.” His partner grunted and told the group to stay away from the women, the beaches, the bars and the drugs. Their interested piqued.

The smells of the exotic food, the beauty of the beaches and the gunfire of the rebels enveloped Jim’s senses. There were times when the State department drivers would quickly turn down side streets when the sounds of machine guns would break the silence. The drivers would say "just firecrackers," then they'd drive faster. South America was a peculiar amalgamation of lethargy and danger; the sultry air percolated with sweet smelling jasmine mixed with fear and Jim found it all exhilarating.

In Recife, Brazil, Jim and Joe decided it was time to find some marijuana. They asked a guy on the street, “Permisso..Tine marijuana?” He told them to stay where they were and he would come back with some in a half-hour. They sat on a bench outside of their hotel and started wondering if the cops were the ones coming back. The guy returned with a large brown shopping bag full of some powerful smelling grass and demanded American cash. Jim didn’t have enough US Dollars, but the seller was more than happy to accept his American Express Travelers Checks. Joe handed Jim a pen to sign the checks while shaking his head saying, “No one is going to believe this.”

The pace of the tour and the length of time traveling through strange lands with government officials started taking a toll on the group members. No one was friendly anymore. The Trio sarcastically kept reminding Jim that he was just the very young, overpaid accompanist. Chad even punched him in the mouth after a show saying he didn’t like his attitude. Finally with a day off in Santo Domingo, Jim took advantage of the time to get away by himself. He took his guitar and found a cliff overlooking the ocean. The sound of the crashing waves in that beautiful place of solitude inspired him with a melody. He wasn’t intent on writing songs, he just filed the improvisation way in the recesses of his memory. The tune finally emerged years later while writing “Chestnut Mare” with Jacques levy.

The Trio returned to California with a three-week respite before a concert at the Crescendo Club in Hollywood opening up for comedian Lenny Bruce. Jim and Chad checked into the Tropicana Hotel on Santa Monica Boulevard and Jim immediately headed for the Troubadour.

Doug Weston, the owner of the Troubadour, remembered Jim and invited him to make himself at home in the Folk Den, the front room. A new group scheduled to perform the next night was just finishing their rehearsals in the main room. They called themselves The New Christie Minstrels. As Jim was playing his banjo, a member of the Christie Minstrels introduced himself. He was meeting his friend Bob Hippard for dinner and invited Jim to join them. Over the evening meal, friendships developed. Art Podel was looking for a roommate and Jim jumped at the chance to get out of a hotel room.

Art and Jim found a two-bedroom ranch house on Wonderland Avenue in hills of Laurel Canyon. It quickly became the headquarters for the marijuana enthusiasts in the folk scene. Barry McGuire, one of The New Christie Minstrels, and Bob Hippard were regular overnight guests ... too stoned to drive home.

The situation with Chad Mitchell had deteriorated ever since the night in South America when Chad had punched Jim. The night of the Crescendo concert, Jim walked into the dressing room with a sense of dread. Not only were the personalities clashing, he was no longer happy being just the accompanist and the trio had no intention of letting him sing. Jim's future with the Trio didn't seem promising.

During the show, Jim’s position on stage was standing behind the group and to one side. He had heard the same jokes continually for the past three months, so to amuse himself, he would make mimicking faces while the group recited their stage chatter. Just before the punch line of their jokes, Jim's face would spring into a comical mug and the audience's laughter began before the jokes were over. Bobby Darin was in the audience that night and a change was a-comin'. 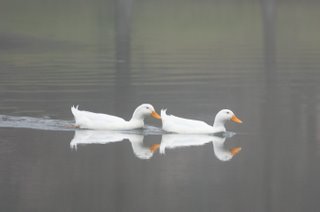 The morning walk by the pond (photo by Camilla)